Is this a photo of an actual ad posted by sex traffickers?

This image has been cited as an example of a 'sex traffiking ad' in facebook & twitter posts here: 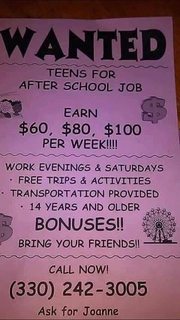 Was this picture actually used by sex traffickers to find victims?

sexual-abuse advertising
Share
Improve this question
edited May 24 '17 at 7:33

On Feb 1st, 2017, the "Costa Rica Star" reported that a school district in San Diego performed a sweep which arrested 400 in connection to sex trafficking, featuring a cropped picture of this photo.

San Diego released a press statement on Feb 1st 2017, indicating that "Operation Reclaim and Rebuild" resulted in 474 arrests state wide (California) with 28 children rescued and 27 adults rescued. The breakdown was

The article detailing this specifically mentions operative in the "streets and online". Where they make explicit description of police personnel using the internet.

The day prior, an inital press release was performed. In that release "Operation Reclaim and Rebuild" was detailed to have worked by the technique, "Fake ads were posted online offering sex for money, and when the buyers showed up to make the transactions they were met by law enforcement."

Two people on social media suggested that this poster might be related to sex trafficking, without corroboration beyond their suppositions (based on the minimum age, and indication that transportation would be provided) However, both the people are from Ohio, not California, and one makes claims of documenting a note from a third unnamed parent who "witnessed" a phone call that almost got their 14 year old, but when called back the man was angry with them and yelled at them then hung up. (I would be too if I was accused of sexual trafficking). The complaints are registered at a robo-call tracking site, which would be slightly odd to robo-call if you're phishing.

I don't know if the poster was ever used for sex trafficking; however, it certainly wasn't used in conjunction with the statewide California "Operation Reclaim and Rebuild" announcement for two reasons.

Finally, this is a trope that continues to be raised. In 2015 large numbers of "firms recruiting teens for sex trafficking claims were raised", yet not one of the claims were substantiated or resulted in statement stronger than a few schools stating "some flyers for student work might be fronts for trafficking"

These claims have failed to raise a single confirm-able case, but they did leave a trail which indicated that BuzzFeed may have paraphrased a Twitter parody account which was being believed as a real complaint as early as 2 June 2014.

One of the claims puts text to an image of a letter from Vector the door-to-door sales organization that distributes CutCo Cutlery. Note that while the letter makes no claims about what sex you should be to apply, indicating you must be 17+, the caption distributed indicated it was "being sent to young women" from a group that was "drugging girls that show up to the interview".

In short, it seems extremely unlikely that one would post a flyer to recruit; but, the story is good enough to keep coming back. For sex trafficking, there is already a large number of people who can be recruited that will not be missed (or at least won't be reported as readily as the average US school student would be reported if gone missing).

Not the answer you're looking for? Browse other questions tagged sexual-abuse advertising .

3
Are "Get Paid to Travel" ads part of a sex trafficking network?

31
Do 31 US states give rapist fathers visitation rights?
10
Can reading a word trigger a trauma flashback?
47
Did Esurance put up a billboard saying "Cover your home in a dick"?
20
Was this image used in an anti-rape advertising campaign?
2
Did Frances Coppola tweet about immigration opponents organising the Cologne sex crimes?
9
Are one in five children in Europe victims of sexual violence?
10
Do 90% of rape cases in the UK go unreported?
6
Are scammers using social media fake-news sharing behaviour to identify and target gullible people?