Do 82% of women making $100K per year in the US do it through home based businesses? [closed]

Ask Question
Asked 4 years, 1 month ago
Active 3 years ago
Viewed 15k times
7
Closed. This question is off-topic. It is not currently accepting answers.

See this on social media every now and then. Any truth to it? 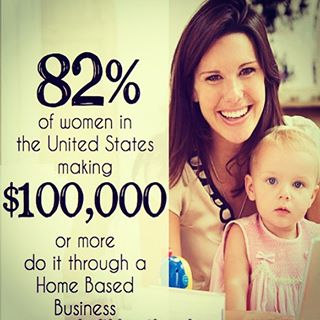 From searching the internet for a source to either claim, I found myself time and again landing on a Multi-Level-Marketing or Direct Sales company. Note that these terms are usually associated with companies such as Amway, Vector Marketing, Herbalife, and other companies that are borderline, if not outright pyramid schemes.

It seems that some variant of this phrase in the photo is used as marketing for stay-at-home moms/out-of-work women, who may be more vulnerable to offers of high-paying jobs working from home.

While I cannot find definitive proof either for or against the claim, I will say that considering the source of many of these claims, I would be extremely hesitant to trust it, especially if the claim is unsourced.

As another way to look at the claim, let's actually examine the numbers and see if they make sense.

According to this article from the Washington Post, there were approximately 2.4 million women with incomes of over $100K at the time of the 2010 US Census. If we take the claim at face value, that means that a little under 2 million women make $100K+ in direct sales.

If we take the 28.56 billion (which admittedly is the entire population, and not just women) and divide that number by the 2 million women who supposedly earn $100K+ per year from direct sales, you come up with a value of approximately $15,000/year/woman. This amount is obviously not $100K, as the amount would have to be. Those 2 million women make $200 Billion over the course of the year, significantly more than the total sales of Direct Selling companies that same year.

Judging by those numbers, which come from the US Census and a pro-Direct Selling website, it seems like a mathematical impossibility for the claim in the image to be correct.

Not the answer you're looking for? Browse other questions tagged social-media business .

5
What role did Facebook/Twitter play in the “Arab Spring”?
36
Is this a real display in the United States Holocaust Museum?
5
Is British MP and Brexit campaigner Jacob Rees-Mogg receiving support on social media from known Kremlin networks?
6
Are scammers using social media fake-news sharing behaviour to identify and target gullible people?
7
Did a baby named Netflix de Jesús get registered this year in Colombia?
10
Are 63% of Instagram users 'miserable'?
5
Are the “DHSC Communications Team” using bots to flood social media with posts showing NHS workers supportive of government policy?