This picture was posted on the Facebook page, The Other 98%. 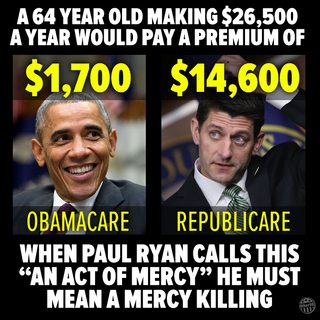 Is this really true? Will the premium be more than half of the income of a 64 year old under the proposed new system? And is the old rate true?

This figure has been extracted from the Congressional Budget Office (CBO) report.

According to the CBO, 64-year olds making $26,500 per year would see their premiums increase by an estimated 750 percent by 2026. While they are on track to pay $1,700 under the current law, the CBO projects the American Health Care Act would force them to pay $14,600. Even if you grant that inflation will allow them to make slightly more money by 2026, that's still about half of their income going to health care.

They point to a table from the CBO report: 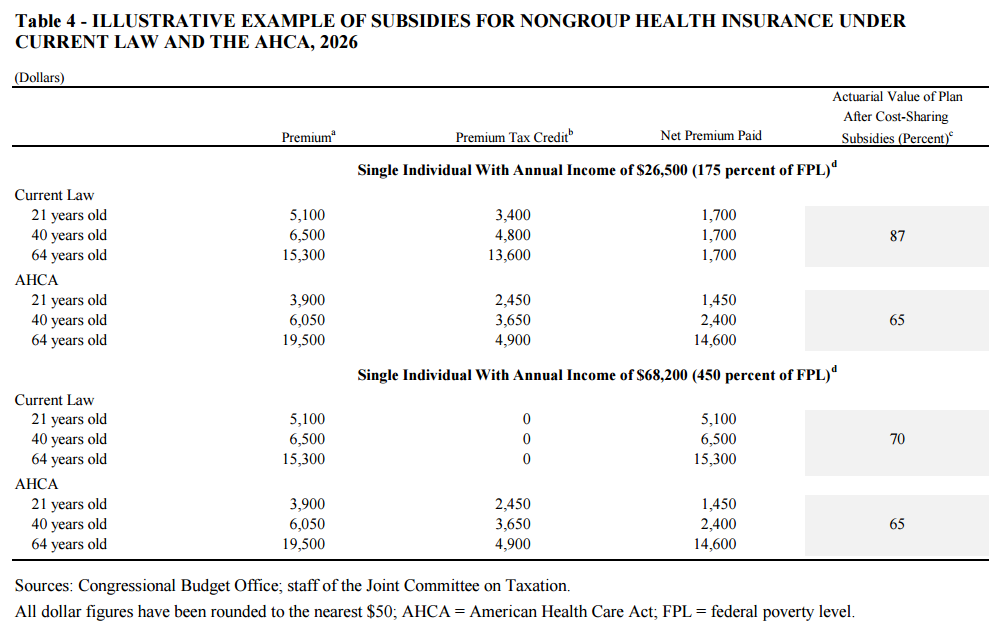 Like all economic modelling, the CBO report is based on assumptions that you might disagree with, but the original claim is not invented - it is backed by a reasonable source.

The parameters used in this example do seem to be chosen to illustrate a very hard-hit demographic, so while they are real and might in fact be illustrative, they don't represent all Americans:

Not the answer you're looking for? Browse other questions tagged united-states politics healthcare .

17
Is Tagg Romney the owner of a company that makes Ohio voting machines?
15
Does the Veterans Health Administration (VHA) provide higher quality, cheaper care than most other US health systems?
8
Did more than 10 million people get health insurance due to the Affordable Care Act (Obamacare)?
12
Do 60% of Americans believe a third major political party is needed?
19
Is sexual assualt considered a pre-existing condition in the new US Health Care plan?
8
Is at least $70 million in health care costs in the USA directly attributable to low literacy?
11
Do rich Americans pay a lower portion of their income in federal taxes than the middle class?
207
Are these claims about Japan’s health system true?