Skeptics Stack Exchange is for challenging unreferenced notable claims, pseudoscience and biased results. This question might not challenge a claim, or the claim identified might not be notable.

I've seen this claim several times in the atheist community, as a pragmatic counter to the idea that belief-in-evolution is incompatible with Christianity.

But is it true?

Note that by "evolutionist" I specifically mean a person who believes changes in allele frequency have accumulated for hundreds of millions of years, resulting in adaptation, speciation, and generally modern life-forms as we know them. Someone who believes in an old earth, in "macroevolution", but not necessarily in abiogenesis. And by "Christian" I just mean someone who self-identifies as that.

Answers with variations on those definitions are fine, but please call it out.

Also note that there's two parts to the claim:

This varies by country. For international information see European Christians are at the forefront in accepting evolution: results from an internet-based survey Evolution & Development, 12 (6), 537-540: 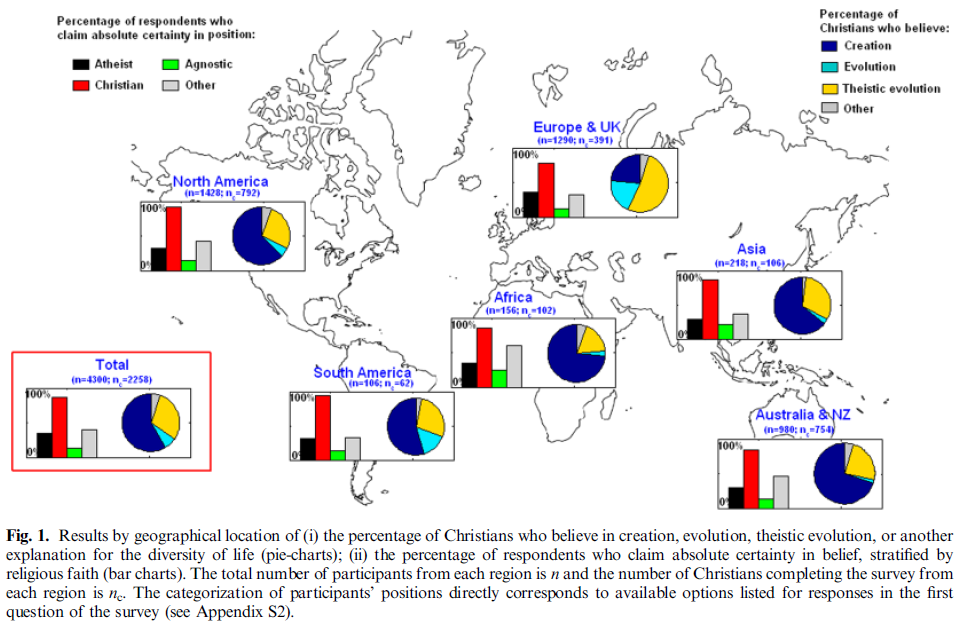 It was found that almost 60% of Christians believe in creationism and less than 10% believe in natural evolution.

OP commented that he was particularly interested in the United States.

The data, considering "completely agree" or "mostly agree" to be supporting evolution, are broken down like this:

So overall, the Catholics and Orthodox Christians, who favor evolution by a slight majority, are outweighed by the Evangelical Protestants, Historically Black Protestants, Mormons, and Jehovah's Witnesses, who oppose evolution.

Yes, on both counts. This is based on a newer version of the same Pew survey DavePhD used (his was from 2007, mine from 2014). The new version directly provides numbers for the first question rather than having calculate it from other numbers.

For the first question, the percentage of Christians agreeing with the statement is as follows (for humans):

As for the second question, I can't find aggregate numbers for all versions of belief in evolution, but they do provide separate percentages for the individual beliefs. For what percentage of people who agree with the statement are Christian:

27
Does the Catholic church accept evolution?

51
Demonstrable and repeatable examples of evolution
15
Are apes our ancestors?
13
Did Lucretius write about evolution and natural selection?
10
Are most people right handed, because they had to protect their heart?
3
Did the appendix evolve independently in marsupial and placental mammals?
8
Are wisdom teeth disappearing?
10
Are humans descended from chimp-pig hybrids?