According to David Duke: 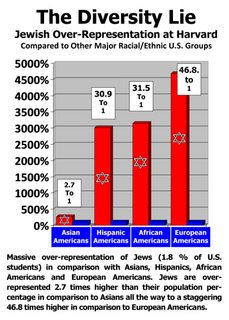 Search for the claim in Google returns results from mainly alt-right and biased websites.

racism judaism university
Share
Improve this question
edited May 5 '18 at 19:21

Jewish students are overrepresented in Harvard compared to the percentage of Jews in the US total population, but the graph shown misleading and is based on wrong numbers.

The Graph is Misleading

But looking at the site, we see that their numbers are:

Jews are 1.8 percent of college age Americans and given 25 percent of the admissions.

Those numbers are wrong, but even if we take the numbers as true, that would put the Jewish overrepresentation at 13.9 times and not 47 times.

The Numbers are Wrong

Going over the claim in the site, as mentioned above, Duke claims that Jews are 25% percent of the Harvard students, as cites the source as Hillel and Princeton review without linking to the sources. But, according to Hillel the number of Jews on campus is:

Which makes the total percentage of Jewish students in Harvard 15%.

The number of Jews in the population is hard to find, as it's not asked in the US census. According to a New York Times survey:

Jews make up 2.2 percent of the American population, a percentage that has held steady for the past two decades. The survey estimates there are 5.3 million Jewish adults as well as 1.3 million children being raised at least partly Jewish.

Which puts the representation of Jews in Harvard at 704%.1

Other ethnicities in Harvard, according to the Harvard admission statistics are2:

Which means that 51% percent of the admissions are non white. Adding to it the Jewish number would mean that 34% of Harvard admissions are "European American".3

From the 2010 US census (wikipedia link) the percentage of the US population according to ethnicity is:

Again, assuming that Jews count as Non-Hispanic White, the percentage of "European American" is 61.5%.

Which makes the representation of each group:

Putting those number into the nonsensical formula of the chart would yield the following results4:

1 - Representation is calculated as: (% of students of certain ethnicity)/(% of US citizens of that ethnicity).

2 - I couldn't find the percentage of students in Harvard by ethnicity/race (other than for Jews), nor the admission numbers for Jews, so I'm using the numbers I have. Also the admissions document doesn't state if it's for undergrads only or for grad and undergrad programs. I assumed the former, as it makes the Jewish overrepresentation bigger. In case where we are talking only about undergrad programs, then the Jewish representation would fall to 545%, which is still the biggest representation, but it's significantly lower than the 704% figure.

3 - Jews come in all the colors of the rainbow and can be of different races, since they are not regarded as a separate race in the sources used, I had to chose what to take them from. Since most of the Jews are of European, Middle Eastern or North African (non black) descent, and since that would be the most generous interpretation of the claim (as it would reduce the number of "European American" and thus make their representation even smaller) I chose to deduct the number of Jews from the number of non Hispanic White in both the Harvard admission percentage and the US population percentage.

Not the answer you're looking for? Browse other questions tagged racism judaism university .

8
Can one enroll in Harvard University without taking an English test?