A search for the quote returns results from many websites 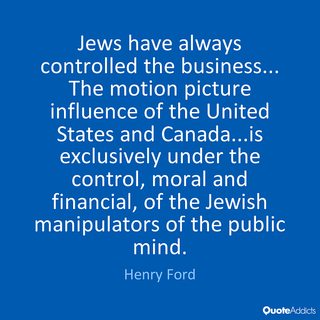 It claims that Henry ford said,

"Jews have always controlled the business... The motion picture influence of the United States and Canada... is exclusively under the control, moral and financial, of the Jewish manipulators of the public mind"

Did Henry Ford say this?

Ford was an antisemite, so such a quote is not out of character.

Many other sources attribute the quote to "The Dearborn Independent, 12-19 February 1921".

The quote is from two different articles. From The Jewish Aspect of the "Movie" Problem:

If this is true, it is chargeable to the Jews themselves, for Jews have always controlled the business. That it is true is probable, for the most zealous lampooners of the Jews have been Jewish comedians. Non-Jews fail abjectly in endeavoring to portray the character.

Who stands at the apex of this mountain of control? It is stated in the sentence: The motion picture influence of the United States—and Canada—is exclusively under the control, moral and financial, of the Jewish manipulators of the public mind.

It should be noted that Ford did not write all the articles himself. Wikipedia describes the process:

Ford did not write the articles. He expressed his opinions verbally to his executive secretary, Ernest Liebold, and to William J. Cameron [...]. Cameron had the main responsibility for expanding these opinions into article form[...].

In addition to what tim answered, the quote "Jews have always controlled the business" separately appears in a 1922 authorized biography of Ford, which was partially written by Ford.

In The Amazing Story of Henry Ford, the quote "Jews have always controlled the business" appears on page 183. The page is titled "Jews Always Controlled Movie".

In fact, 7 chapters of Ford's biography are about Jews, with a whole chapter about the Jews and the movie business.

Not the answer you're looking for? Browse other questions tagged united-states economics quotes antisemitism .

13
Did Eleanor Roosevelt say that the Jews brought the Holocaust on themselves?
32
Did Henry Ford predict revolution if people understood the banking and monetary system?
20
“War never changes”: Fallout or Ulysses S. Grant?
29
Did Borat originate the notion that Jews shape shift?
4
Did Richard Nixon say, "Jews think they can run the world"?
39
Did Benjamin Franklin warn the young American Nation against the Jews?
63
Did Henry Ford say "If I had asked people what they wanted, they would have said faster horses"?
27
Did Amin al-Husaini say, "slaughter Jews wherever you find them"?
6
Did Abraham Isaac Kook say that Gentiles have different souls than Jews?
15
Did Henry Ford ever say "any color he wants as long as it’s black"?