Do smoking-related deaths save cost to health service?

“Well cigarettes aren’t that bad really when you think about it,” Devine said.

“It might shorten a couple of years off the end of your life, but that’s a good thing. That actually saves money in the long run for the health system.”

Can this claim be substantiated?

I presume she was implying the Australian public health system, and so answers should probably take into account other effects of smoking on the Australian government budget (tax revenue, state pensions etc).

TLDR: The claim does appear to have support from scientific studies.

Details: The original claimant has tweeted a citation to support her claim:

It's true! Smokers die earlier so cost the health system less than healthy people who clog up hospitals in old age http://bmjopen.bmj.com/content/2/6/e001678.full

A review article from the Blog OpenPop that looks at the scientific literature in this area broadly agrees with these findings:

In conclusion, the weight of the evidence suggests that smoking is a positive fiscal externality. Smokers pay less in income taxes than non-smokers, yet pay considerably more in consumption taxes. Their lifetime healthcare costs are probably slightly lower than those of non-smokers. And they take far less from the pension system than non-smokers, relative to what they pay in.

They warn of several caveats to this conclusion:

First, it is tentative. At least one major study, namely Sloan et al., reaches the opposite conclusion. Second, it may only apply to the U.K. (and other similar countries), where healthcare and pensions are largely financed by the state, and taxes on cigarettes are very high. Third, as many authors have noted, the fact that smoking may have a positive fiscal impact does not imply that efforts to curtail smoking reduce social welfare. Indeed, if each QALY [quality-adjusted life year] is assumed to be worth €14,600, then Tiihonen et al.’s finding reverses, and smoking becomes a net cost for society.

There are many different ways of modelling the cost of tobacco to society, depending on what figures are included or excluded from the total amount.

For example, Devine's described model appears to have a goal of minimising only the per person cost of health care. This is self-evidently a poor choice of metric, as it justifies absurd behaviours - like letting people die quickly - or even encouraging them to die - once they get past child-bearing age.

Some of the more substantive models, such as one I will introduce below, include the costs of losses of trained workforce labour, the costs of hiring people to support the incapacitated, the cost of increased fires and even the cost of the tobacco itself (which is not spent on other industries). They consider the costs to households, businesses and governments.

This is not even include the intangibles, such as Disability-Adjusted-Life-Years (DALY) lost to smokers and the cost to their families of their early deaths.

Also different countries have different pension and health care models, so the research must be used with care.

I have only provided a selection here - the full answer could fill a book.

This study looked at 1976 men from Finland, over a period of years. The smokers has a shorter lifespan by 8.6 years. They found that, yes, this meant that smokers had a lower health care cost, and they also missed out on 7.3 years of pension.

Overall, smokers’ average net contribution to the public finance balance was €133 800 greater per individual compared with non-smokers. However, if each lost quality adjusted life year is considered to be worth €22 200, the net effect is reversed to be €70 200 (€71.600 when adjusted with propensity score) per individual in favour of non-smoking.

Miranda Devine is Australian, so the Australian research is relevant.

This entire chapter does a detailed analysis of the question, based on research from 2008 and how it affected the 2004-2005 budget year. It is worth a look.

Looking at just the tangible costs, Table 17.2.3 has a column looking at the cost to the government, which appears to be Devine's concern: 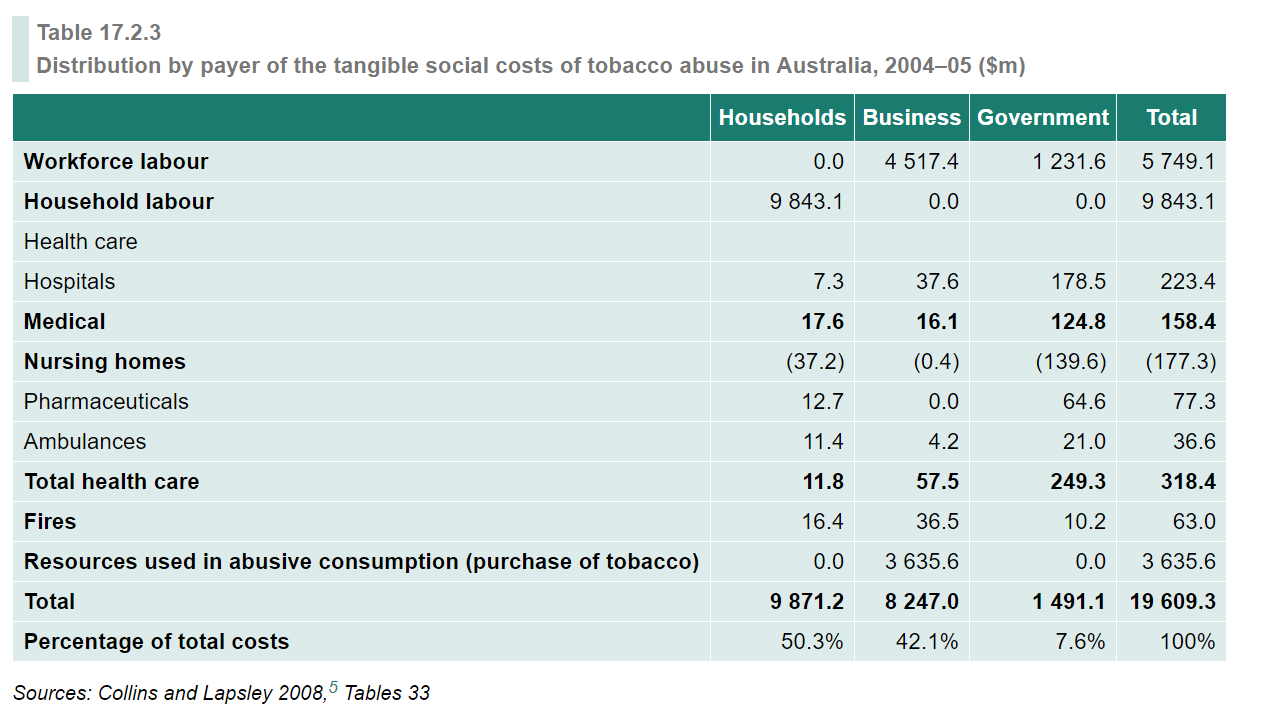 It shows that, indeed, there is a saving of almost $140 million in Nursing homes, but the this is outweighed by hospital costs alone, let alone pharmaceuticals, medical and ambulance costs. In total, smoking adds $249.3 million to the costs to the government alone (and this pales compared to the overall tangibles costs, of over $19 billion.)

If you want to take taxes (both gained on tobacco products, and lost in productivity) into account, check out Tables 17.2.5 and 17.2.6. It is pretty dire.

Intangible costs to society are estimated to be about 150% of the tangible costs (Table 17.2.1), so you can see even this isn't the whole story.

Not the answer you're looking for? Browse other questions tagged australia smoking .