Kaziranga National Park is a story of success when it comes to conservation of rhinos – but what they’ve done to achieve it is allowing its workers to shoot and even kill potential poachers. So far, the park has killed 50 people.

I find this hard to believe, but I only got two hits in a web search, and both are click bait, and one is a cut/paste from the other. I'll try a few other search strings, but if someone actually knows whether it's true.....

As far as we can tell, yes. Rangers in Kaziranga park have killed 72 suspected poachers between 2007 and February 10th, 2017

Here is a report from the BBC from February 10th regarding the park and its policy.

Its rangers have been given the kind of powers to shoot and kill normally only conferred on armed forces policing civil unrest.

They have a chart approximately halfway down the page that indicates that 72 poachers have been killed in the past decade, the majority of which were killed during 2014 and 2015: 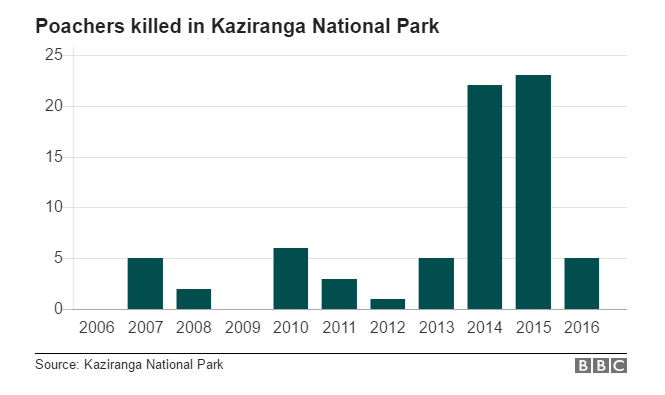 There are actually some parts of your linked story that may have been lifted directly from the BBC article.

BBC - At one stage the park rangers were killing an average of two people every month - more than 20 people a year. Indeed, in 2015 more people were shot dead by park guards than rhinos were killed by poachers.

BoredPanda - However, more people were shot dead by park guards then the number of rhinos killed by poachers.

Another article was published by theconversation.com a day after the BBC article.

SaveTheRhino reproduce a 2012 article about the the issue:

Very occasionally, shoot-to-kill is not only tolerated but encouraged, as a way of sending a very clear signal to poaching gangs, and rewarding the bravery of the rhinos’ protectors. In Kaziranga National Park, India, forest guards receive a cash bonus to their salary if they successfully wound and kill a poacher. This stance has affected funding; indeed this policy caused the BBC Wildlife Fund to pull out of planned funding for the programme a couple of years ago.

Not the answer you're looking for? Browse other questions tagged india law-enforcement ecology .