Would Trump be worth more if he simply invested in mutual funds?

I have seen several claims that Trump would be worth significantly more if he had just invested his father's money in an index. 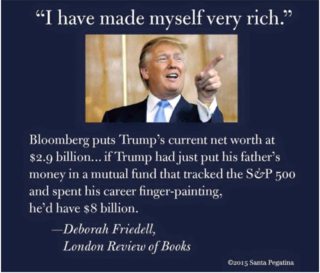 Bloomberg puts Trump's current net worth at $2.9 billion... if Trump had just put his father's money in a mutual fund that tracked the S&P 500 and spent his career finger-painting, he'd have $8 billion.
- Deborah Friedell, London Review of Books

Politifact found that Deborah Friedell was quoting Michael Antonio (who wrote Never Enough: Donald Trump and the Pursuit of Success) who was misquoting the National Journal. He sort of pushed the two quotes together, taking the parts that sounded best from both.

Or look at the source

The claim in the National Journal said:

First problem, that only gets him to $3 billion.

Second problem, to get to $8 billion, we have to take Donald Trump's wealth in 1982 and put it in a mutual fund. Not his father's.

Third problem, he'd have to sit on the money. He wouldn't have been able to spend any of it. Even modest withdrawals, starting in 1982, would have left him further and further off this pace. He certainly couldn't have funded the Trump lifestyle.

The bare argument of 1974 is based on Trump taking over managing the business in 1974. But that is not the same thing as transferring wealth. His father still owned the business from 1974 to 1999.

The National Journal is suggesting that when he took over management of the company, he could have liquidated and put the money into a mutual fund. If we assume that his share of the company was worth $40 million in 1974, then his share would have been worth $3 billion in 2015 (when the article was written). Of course, that neglects taxes and spending. Neither he nor his father could have taken an income from that money.

I'm not going to do the math but here's a glance at taxes. The privileged capital gains rate of 15% doesn't date back continuously to 1974 and is the lowest rate during that time. The rate was more typically 20%, 28%, or 35%.

A glance at the numbers

Not the answer you're looking for? Browse other questions tagged united-states donald-trump finance .

10
Would the US deficit disappear if the costs of medical activity were more like the rest of the world?
11
Did Trump predict Gillespie would lose?
27
Do more Americans want the Bidens investigated than Trump impeached?
6
Is the US government seizing PPE supplies to resell them with a markup?
7
Do the 2020 votes for Trump and Biden add up to more than the total number of votes made?
26
Would the median household income in the USA be $140K and mean net worth $800K if wealth were evenly distributed
8
Did COVID-19 kill ~5 times more people per capita in Jun-Aug 2021 in US counties that >70% voted for Trump than in those which voted <26-32% Trump?