Did Jeff Sessions receive a 2009 NAACP Governmental Award of Excellence?

The NAACP now opposes Sen. Jeff Sessions.....though in 2009 they honored him with their Governmental Award of Excellence. #ConfirmSessions

Politico also included an image of it, linked from an article: 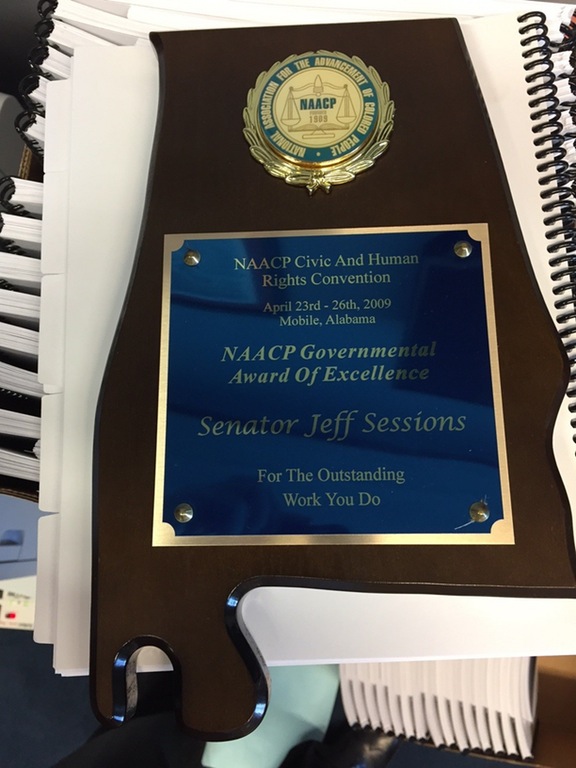 There is controversy around this award, the NAACP national chapter themselves are confused on the matter.

The NAACP is composed of more than 2,000 local and state units around the country. Upon learning of the allegation that one of those units bestowed an award on Senator Jefferson Sessions in 2009, the National Office of the NAACP immediately undertook an investigation. While we already have strong reasons to doubt that any such award was given to Senator Sessions, we will continue our investigation until we are confident that we know all of the facts. What remains true and unchanged is the NAACP’s strong opposition to the nomination of Senator Sessions to become the next Attorney General of the United States. The NAACP’s position against Senator Sessions is based on his decades of conduct as a prosecutor and, later, U.S. Senator from the State of Alabama. In matters of civil and human rights, civil liberties, fair policing, voting rights, sentencing fairness, women’s rights, hate crimes and more, Senator Sessions has repeatedly demonstrated that he is clearly unsuited to perform the duties of an Attorney General in these crucial times.” press statement

Jimmy Gardner, president of the Mobile NAACP branch at the time of the award is quoted as saying he believes the award is real:

Jimmy Gardner, the current mayor of Prichard who was president of the Mobile NAACP chapter at that time, said he believes the award was given by the Alabama state conference.

"There were several governmental folks who were awarded for their work and what they had done," said Gardner, adding that he was unclear as to why Sessions was honored. "It was based on their work."

15
Did Ronald Reagan sign my Academic Fitness Award?
22
Did Barack Obama receive 108% of the vote in one Ohio county?
27
Did Germans receive corn instead of wheat and rye after WW2 due to a translation error?
16
Did health authorities receive a significant number of calls about the use of disinfectants (or drinking bleach) after president Trump mentioned it?