Do 75% of new Muslim converts in the US leave Islam within a few years?

From the Islam-critical site WikiIslam:

However, most individuals who convert rarely choose to study Islam objectively before making such an important decision. Instead they choose to be taken in by the propaganda, only to discover that they have made one of the biggest mistakes of their lives. This is confirmed with research carried out by the respected Pakistani-born American Muslim Dr. Ilyas Ba-Yunus (1932 - 2007), who found that 75% of new Muslim converts in the US leave Islam within a few years.

Question: Do 75% of new Muslim converts in the US leave Islam within a few years?

I was not able to confirm any of the references:

According to the wikiislam link, the sunnipath link was created in October 5, 2007. The link is dead and the earliest Archive of it was captured on 26 October, 2007 by Wayback Machine. This captured snapshot says nothing about the claim and talks about a study about Muslim divorce rates:

One of the oft quoted statistics about divorce rates amongst Muslims in North America comes from an early study done by Dr Ba-yunus.

But the divorce studies methodology is disputed by other other researchers.

In the limited amount of research available on marriage in the American Muslim community, there is conflicting evidence about the frequency of divorce. A single study estimates a nationwide American Muslim divorce rate of 32.33% (Ba-Yunus, 2000, 2007), a high number and one that is contested (Alshugairi, 2010; Leonard, 2003) because of the methodology of the study. Ba-Yunus derived his statistic by examining 10 years of official marriage and divorce records in five American states and one Canadian province selected for their large Muslim populations. He divided the average number of Muslim divorces per state by the average number of Muslim marriages per state, and then averaged the states’ mean Muslim divorce rates to yield a “nationwide” statistic of 32.33% (Ba-Yunus, 2007). This statistic should be considered with caution, not only because of the lack of information about the sample and the non-random selection of states, but also because of the difficulty of obtaining accurate figures for Muslim marriages and divorces. Not all Muslims will document their marriages (or divorces) with their state. Some prefer religious ceremonies to legal ones (Macfarlane, 2012), and others were married in a country outside the United States, so that the only American legal record is of their divorce (Ba-Yunus, 2000).

In contrast to Ba-Yunus’ divorce rate of 32.33%, Alshugairi (2010) reported a much-lower divorce rate of 21.3% for a sample of 751 Californian Muslims. This sample statistic closely matches the above-mentioned ten year divorce rate of Asian American women – an important point, since approximately one-third of American Muslims are South Asian (Bukhari, 2003). Yet it is Ba-Yunus’ higher statistic that appears in several mainstream American Muslim publications (e.g. Ghayyur, 2010; Kholoki, 2007; Siddiqui, 2009), despite the lack of consensus over its accuracy. Ba-Yunus’ statistic has caused and reflected considerable unrest. Further empirical investigation of American Muslim marriages may help to allay concerns or point toward specific problems that may be investigated in more detail.

According to the video G. Bach linked to in comments, Ilyas Ba-Yunus said (reportedly) [at 9.15]:

According to our estimation ... we privately found that out of 100 people who accept Islam, 75% of them give up on Islam

This is not a study. This is what he reportedly said and his words were recorded. The study doesn't exist. Also, the site wikiislam has huge number of statistics that are outright false and not staticstics at all. For example: 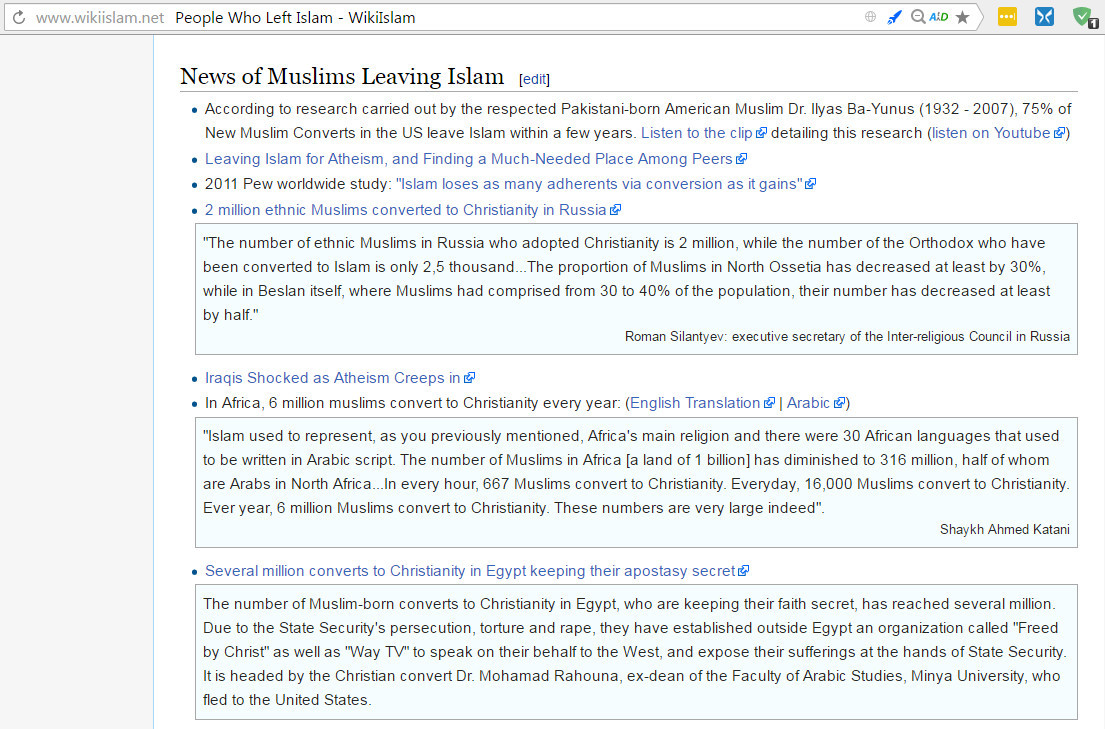 The third link refers to this (webcitation.org link. CNN deleted it from their own site) CNN article which says:

Conversion will play relatively little part in the increase, the report anticipates. It says little data is available on conversion, but what little there is suggests Islam loses as many adherents via conversion as it gains.

No, that's not true, that's fake News. CNN commentator made up that lie. According to The Future of World Religions: Population Growth Projections, 2010-2050, Islam is expected to gain more than 3.2 million followers due to religious switching, the largest for any religion.

Not the answer you're looking for? Browse other questions tagged united-states religion islam .

16
Are Muslims 25 times more likely to commit terrorist attacks within the United States than non-Muslims?
7
Is the swastika over 11000 years old?
8
Did European Muslim protestors carry signs “Shariah for the Netherlands”, “Islam Will Dominate the World, Freedom Can Go to Hell”
4
Is 15 percent of the U.S. prison population Muslim?
1
Did Muslim women lose property rights during the British colonial rule in India?
3
Was the Muslim population of India in 1850, 16% of the total population?
9
Is the map about Islam and Aids in Africa based on factual information?
8
Will the new Royal Adelaide Hospital have a Muslim-only prayer room while other religions share?