Did the ban on Israeli travellers postdate the construction of Israeli settlements which displaced Palestinians?

The countries that banned the passport have done so for a reason. They are aware of the atrocities committed by the Israel Defence Force and have seen Palestinians being displaced from their homes for the illegal settlements.

I know that motivation questions aren't allowed, so rather than trying to look at motivations, I'll look at dates - whether the purported cause occurred before the effect. I've done some searching, but while there's plenty of articles mentioning the ban on Israelis, I haven't found so far mention of when the bans started.

Did the ban on Israelis postdate the construction of Israeli settlements which involved Palestinians being displaced?

Wikipedia has a handy map of countries that have ever recognized Israel: 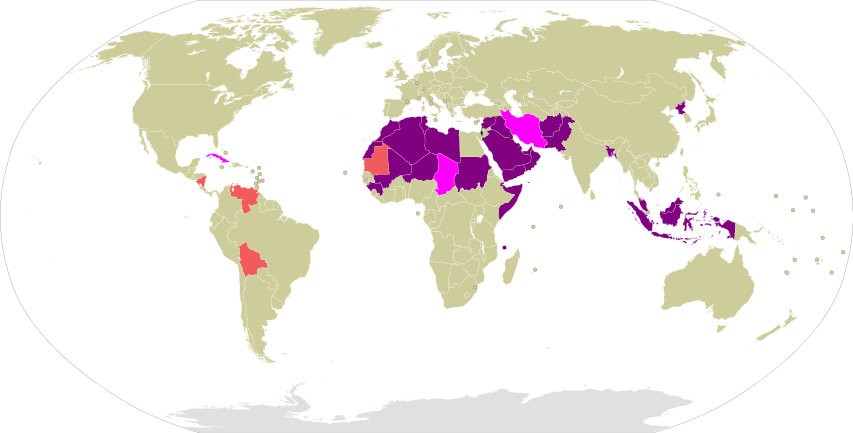 The Muslim-majority dark-pink countries (such as Saudi Arabia) have never recognized Israel and never accepted Israeli documents in the first place. However there are four countries that withdrew recognition:

Therefore the claim is false: Iran severed relations for unrelated reasons and the other three countries still admit Israeli passports.

Also note that Amnesty International Australia themselves withdrew their claim and apologized for the statement:

On Tuesday 31 January, a comment was posted on the Amnesty International Australia Facebook page regarding travel restrictions on Israeli passport-holders. The comment did not reflect Amnesty International’s position on this issue, and as such we would like to apologise for any misunderstanding this comment has caused.

The Arab League announced a policy of boycotting Israel (or rather the Jewish residents and organizations of Palestine) in 1945. The passport issue is an extension of this boycott. There were local boycotts beginning in the 1920s.

At this point, all Jewish controlled land in Palestine was bought from Arab landowners and there were no "settlements" of the sort that is now described as "illegal settlements"

There is an Arab landlord with Arab peasants working his land. When he sells his land, the Jews want to work the land themselves and don't renew the peasants' tenancies and they lose their jobs. This pissed off Arab nationalists like Qassam and was one of the causes of the 1936 Palestine riots.

Jewish settlement (lower case) displaced Arabs before 1945, but there were no Jewish Settlements (Upper Case) yet.

Not the answer you're looking for? Browse other questions tagged immigration israel .

17
Can Israeli settlers shoot Palestinians with impunity?
46
Did Jews "take over" 73% of their land from Palestinians?
70
Did smiling, female Israeli soldiers pose with "We kill Children" placards during Gaza War?
7
Did Palestinians from the PA with family reunification based IDs engage in terror activities, pre-2003?
2
Has the US given more aid to the average Israeli citizen than the average American citizen?
32
Did the Deputy Chief of Staff of the Israeli Army say this about human trafficking?
4
Did Iranian state TV say that the drone attack on the tanker in July 2021 was in retaliation for an Israeli strike?
4
Is this data about COVID Vaccination breakthrough infections from the Israeli government?