Does Melania Trump's security cost double the National Endowment for the Arts' budget?

This viral post was found at The Resistance with 16,000 shares in less 12 hours. It's from @chapmanchapman who seems to be commenting on Trump cutting the National Endowment for the Arts. 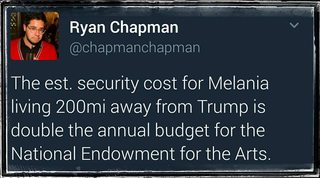 The est. security cost for Melania living 200mi away from Trump is double the annual budget for the National Endowment for the Arts.

His sources check out

The only piece that makes this questionably true is because it's not just for Melania, but the entirety of the Trump family.. See below for the NBC citation. @Chapmanchapman claims his sources in this tweet

Protecting President-elect Donald Trump and his family is costing New York City more than $1 million a day, according to three city officials.

So according to those two sources, 365 days in a year at a million dollars a day is more than double 148 million.

Some sources, such as NBC, estimate the cost to be 2 million a day for the "920 Secret Service" agents protecting the president (total).

Right now, the cost to taxpayers is more than $2 million a day, the documents show, a number that is sure to increase whenever the president or the first lady travels — or when the threat level rises.

Meanwhile, the New York Police Department is already handling external security at Trump Tower, the president-elect's Manhattan home base, at an estimated cost of $1 million per day.

But, they do add that it's not just for Melania,

Protecting Trump's family presents unprecedented challenges. First off, it's a big family — 18 members in all, including Melania Trump and her 10-year-old son, Barron, as well as four adult children, three of them married, with a combined eight grandchildren. [...] The Secret Service has not had to protect the adult children of a president-elect in a long time, Wackrow said.

To be totally correct we could say,

*The est. security cost for securing the Trump family in New York 200 mi away from Trump in DC is double the annual budget for the National Endowment of the Arts.

This claim is currently unproven.

According to a Snopes article written today, which rates this claim as unproven, Chapman cited the CNN article linked below as his source for the security cost and he cited the apparently-correct figure of $148 million as the budget of NEA.

When asked for sources, Chapman cited a New York Times article estimating the NEA's annual funding at around $148 million. (The NEA's website states their 2016 funding as $147,949,000.)

However, the CNN article which he references is citing a figure for protecting all of Trump's family (including his adult children and their families) along with Trump himself while he was the President-Elect and living at Trump Tower, not for the cost of protecting Melania alone (or Melania and Barron alone.) Additionally, later statements from the Mayor of New York City indicate that the cost was actually closer to $500,000 per day, not $1 million per day.

Furthermore, Melania and Barron living in NYC appears to also be a temporary arrangement until the end of Barron's current school year, not a permanent one.

According to an article published yesterday by New York Daily News:

It cost more than $1 million per day to provide protection for President Trump and his family while he was still living in New York after the election, according to CNN. The city has not announced how expensive protecting just Melania and Barron is.

The cited CNN article is from November 21, 2016, while Trump was the President-Elect and was still himself living in Trump Tower prior to taking office and moving to D.C. It says:

Protecting President-elect Donald Trump and his family is costing New York City more than $1 million a day, according to three city officials.

Additionally, this cost is not just for Trump, Melania, and Barron, but also for Trump's adult children and their families:

On December 7, 2016, Mayor Bill de Blasio of New York City was interviewed by a local TV station. During the interview, de Blasio was asked about these costs:

Lehrer: Well, one of the subsequent rounds will be beyond the inauguration. I’ve read a million dollars a day to protect Melania and Barron Trump, who will keep living here, not in the White House, until the end of the school year. Is that an accurate number? A million dollars a day – who pays for that?

Mayor: I think it’s premature to say that. We put forward a figure for the period from the November 8th election to January 20th. That was approximately $35 million.

Snopes is still waiting on getting more up-to-date information:

We have reached out to the city for more information regarding projected security costs for Melania Trump but have yet to hear back.

Cost for National Endowment for the Arts

According to its own website, the FY2016 budget for the National Endowment for the Arts was just under $148 million.

CNN's original figure of "more than $1 million per day" is indeed more than double $148 million per year. However, at the rate used in the more recent estimate in New York's request for compensation from the federal government, the annual cost of security would be about $173 million per year, which is obviously not double the NEA budget of $148 million. Additionally, New York has not yet indicated what it expects the cost of protecting only Melania and Barron to be vs. the cost of protecting Trump himself in addition to Melania and Barron during the transition period.

Finally, according to an article from The Hill that was published yesterday (Feb 2, 2017):

So, it appears that the situation of Melania living separately from President Trump is a temporary one that is currently projected to end some time around May of 2017. So, even if it still did cost nearly $500,000 per day to protect Melania and Barron, this situation is currently planned to only last several months. As a result, even if it did cost that much per day, it wouldn't cost more than the National Endowment for the Arts on an annual basis due to the situation's limited duration.

Not the answer you're looking for? Browse other questions tagged united-states donald-trump security art .

9
Does the US government voluntarily underreport inflation?
23
Is college worth the cost for most Americans?
15
Does the Veterans Health Administration (VHA) provide higher quality, cheaper care than most other US health systems?
22
Does discarding the California vote numbers make Donald Trump lead the national popular vote?
4
Were additional fencing and magnetometers used on the National Mall for Trump's inauguration?
9
Does the US National Security Council have the ability to authorize assassination as described in this post?
4
Was Steve Bannon's appointment to the National Security Council done by mistake?
7
Did the US national debt fall by $100 billion in the first two months of Trump's office?
4
Does having passwords cost $200 (£150) per employee, not including the lost productivity?
10
Does treating end stage kidney disease cost 1% of the United States federal budget?