Are Americans more likely to be killed by vending machines than terrorist refugees?

The Financial Times did some analysis of Donald Trump's controversial immigration restrictions (which were claimed to be about protecting Americans from terrorism).

They focus on analysing risk from refugees since (my emphasis):

They put the refugee issue in context:

Those resettling in the US are interviewed and screened for terrorism and crime links by several US agencies, including the National Counterterrorism Center, the FBI, the Department of Homeland Security and the State Department.

Mr Trump cited terrorism risks as his reason for limiting the number of refugees the US takes. However, since the US refugee programme began in 1975, more than 3.2m refugees have entered the US and only three have carried out a deadly terrorist attack.

The FT analysis includes the chart below: 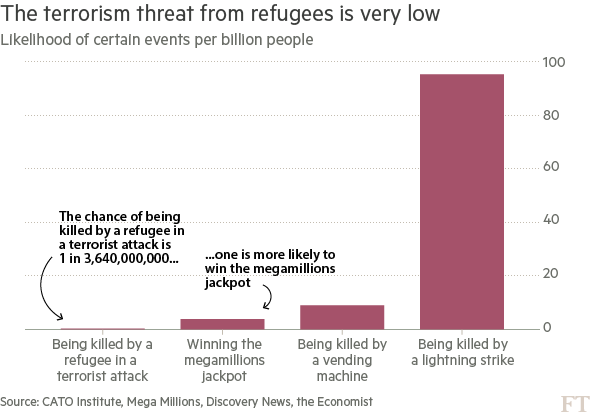 Are their estimates of the risks credible?

Yes those numbers appear to be correct. The Cato instituted published "Terrorism and Immigration A Risk Analysis" in September 2016. From that report: 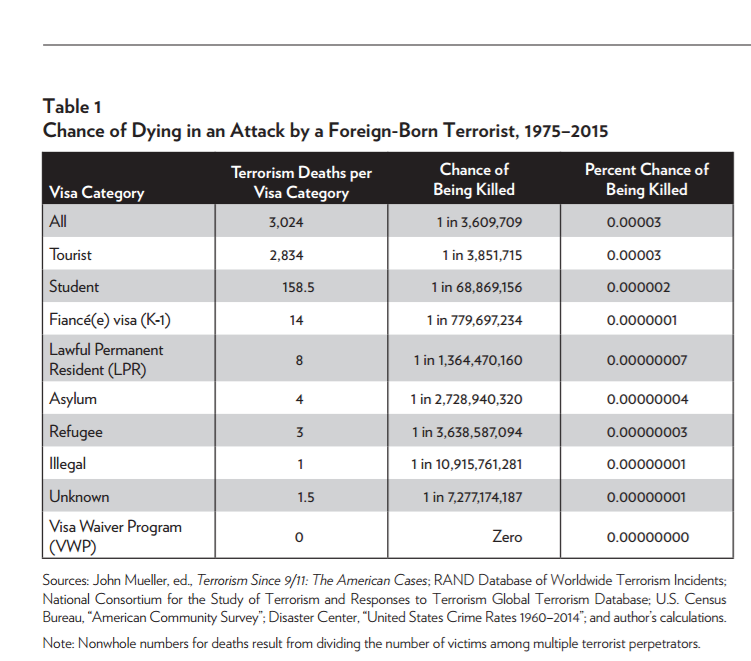 NPR article on the chance of winning the lottery from 2012 notes that it's more likely to be killed by a vending machine. The odds given : 1 in 112 million.

And that means it's more likely, at least judging from one sort-of-old but widely cited statistic, that you'll be crushed to death by a vending machine as you try to shake loose a stubborn candy bar.

The supposed odds of such a death? About 1 in 112 million.

The link to the source of their data is dead, but it seems likely that 1 in 3.6 billion odds are lower than a whole lot of very unlikely causes of death (struck by lightning while drowning: 1 in 183 million).

According to US Citizenship and Immigration Service webpage Refugees & Asylum, last updated in 2015:

Asylum status is a form of protection available to people who:
•Meet the definition of refugee

In other words, not all refugees are asylees, but all asylees are refugees.

By not including asylees in the definition of "refugees" the Financial Times disregarded attacks such as the Boston Marathon Bombings.

Tamerlan and Dzhokhar Tsarnaev (the Boston Marathon bombers) were refugees, but the FT did not included them.

Ibragim Todashev, who allegedly helped Tamerlan Tsarnaev kill 3 Jewish men on 11 September 2011, was a refugee, but the FT did not include him.

1993 World Trade Center bomber Ramzi Yousef was a refugee, but the FT did not include him.

The FT left out 15 terrorism deaths: 7 from the 1993 World Trade Center bombing, 3 from the 11 September 2011 killings, and 5 from the Boston Bombing an aftermath.

So instead of the 3 deaths that FT counted based on the source Terrorism and Immigration, there were really 18.

The vending machine statistic is based upon data before a 1995 campaign to improve the safety of vending machines. It does not indicate the current odds of being killed by a vending machine. 37 people are known to have died due to vending machine accidents from 1978-1995. Also, there is no indication of how many of the 37 were in the United States. In fact, according to the Guardian article The (mainly) men who have fallen under sway of drinks vending machines about Dr. Michael Q. Cosio who was the main researcher of this issue, in his initial study of vending machine injuries and deaths:

The alarming incidents all happened at American military bases in Germany and Korea.

According to this analysis on CrossValidated.SE, we don't really know.

The first problem with this data is non-stationariness. These numbers hold only if the number of refugees and vending machines stay constant. These 3 deaths are not "deaths per 1M of refugees", it's a total. Let 10 times more refugees in, and you'll have to multiply that number by 10.

Taking that chart data to the extreme, I could say that illegal immigrants are 3 times less dangerous than refugees, so why have border control at all?

The second (and IMO more important problem) is statistical significance. 3 deaths over 35 years is simply too little to predict similar deaths in the future.

However, the author acknowledges that the original article's point may still be valid, despite flawed statistical proof.

There are legitimate issues with the chart, but the FT's broader point is correct that terrorism in the U.S. is quite rare. Your chance of being killed by a foreign born terrorist in the United States is close to zero.

Not the answer you're looking for? Browse other questions tagged united-states security terrorism .

38
Are Americans more likely to be monolingual?
69
Are black Americans responsible for more than 50% of homicides?
16
Are Muslims 25 times more likely to commit terrorist attacks within the United States than non-Muslims?
16
Do gun homicides and suicides kill more Americans than war?
47
Have there been more than 27,000 Islamic terrorist attacks since 9/11?
57
Are right-wing extremists a bigger terrorist threat than islamic extremists in the USA?
118
Have more Americans been killed in schools than in military service this year?
68
Are one-third of Americans 'killed by strangers' killed by police?