We have now learned that Trump continued to offer up Apprentice-season-four-quality optics at the “Salute to Our Troops” inaugural ball, where he served guests a spectacular nine-tiered cake made mostly of styrofoam. No one would have probably noticed if the design for the cake hadn’t also been ripped off without permission.

Early Saturday morning, Food Network personality and baker Duff Goldman, who made Obama’s inaugural cake four years ago, pointed out on Twitter that Trump (or someone on his team) had commissioned the exact same cake for his own inaugural festivities, but from someone else.

Source: Jezebel: Donald Trump’s Inauguration Cake Was Plagiarized, Too (The article linked comes from a website with strong anti-Trump sentiments.)

This tweet from from the original cake maker notes the similarities:

The cake on the left is the one I made for President Obama's inauguration 4 years ago. The one on the right is Trumps. I didn't make it. 🤔 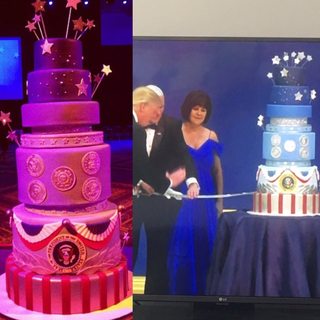 , and the tweet comes claiming to have been copied.

Was the cake at Trump's Inauguration copied from this cake artist?

Note: While the article makes reference to plagiarism, to avoid an ethical debate, this question is asking only if the cake design was copied from Obama's 2013 cake design.

Yes. A Washington Post article (and interview with the Baker) includes a picture of the 2013 cake next to the 2017 cake.

The Baker of the 2013 cake tweeted this comparison.

According to the Post, Tiffany MacIsaac, owner of Washington’s Buttercream Bakeshop, which made the cake said:

"the order came in while she was out of town and that the client had brought in a photo of the cake from Obama’s inauguration, asking her to re-create it."

“They came to us a couple of weeks ago, which is pretty last minute, and said ‘We have a photo that we would like to replicate,’ ”

According to the Posts's interview:

MacIsaac told The Washington Post by phone. Her bakery tried to encourage the client to use the photo as “inspiration,” as they do with many others, she said.

The Trump administration has not replied to requests for comment.

Not the answer you're looking for? Browse other questions tagged united-states donald-trump copyright .