Do blacks in the US get arrested more often for drug usage despite using drugs at the same rate as whites?

Kyle Kulinski of Secular Talk says in this YouTube video that

The studies show that as well. Blacks and whites use drugs at the same rate but black people get arrested way more often for it.

A similar claim is often made, but limited to the use of marijuana. For that, the Washington Post has a good overview. The results for overall drug use are similar to those results.

Drug use by race/ethnicity

The dataset that is used most often to evaluate claims like this is the National Survey on Drug Use and Health.

You can view a table showing data from 2012 here.

Basically, while white people tend to try drugs in higher numbers, looking at the "past month" value, it can be seen that black people do drugs in slightly higher numbers.

The same can be seen when looking at the number of days in the last month that Marijuana was consumed (the graph is generated from the 2011 data set): 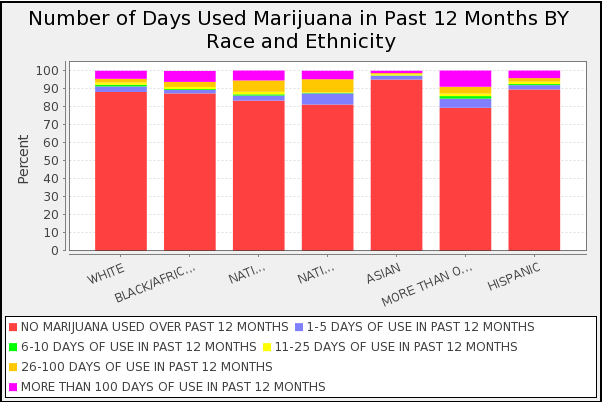 This is a trend that can be seen over the years: 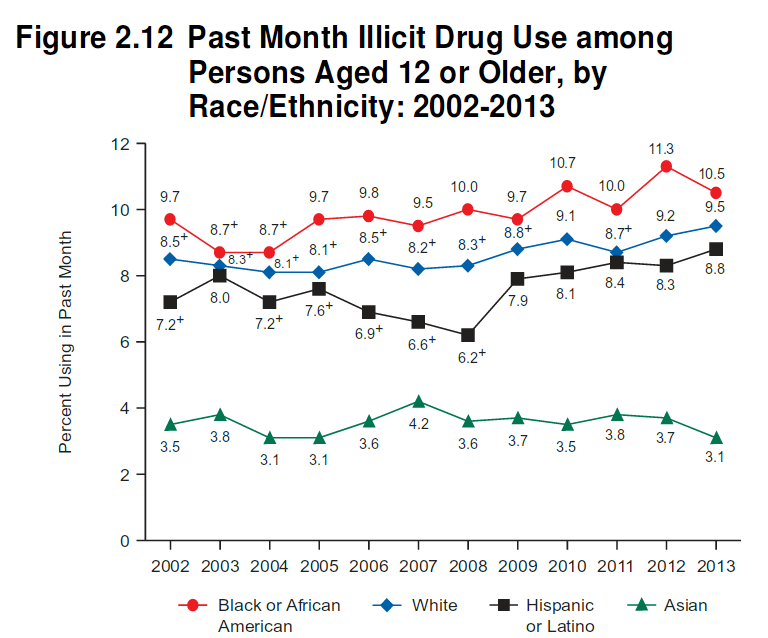 Arrests for drug offenses by race

slate.com and politifact.com have created a graph from data from the BJS: 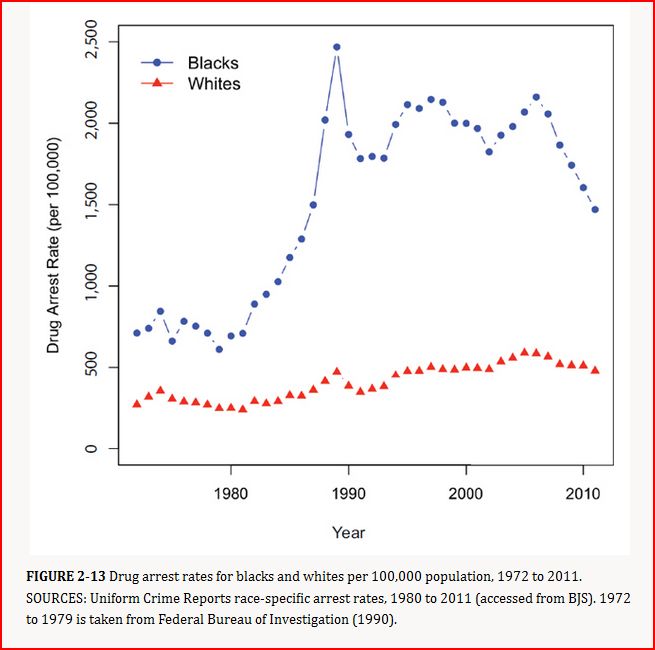 [T]he National Research Council report says, "In recent years, drug-related arrest rates for blacks have been three to four times higher than those for whites. In the late 1980s, the rates were six times higher for blacks than for whites."

In every year from 1980 to 2007, blacks were arrested nationwide on drug charges at rates relative to population that were 2.8 to 5.5 times higher than white arrest rates.

Disparity between drug use and drug arrests

The above data shows that while black people do marginally more drugs, they are arrested disproportionately more often than white people.

politifact looked at a similar claim and concludes:

[...] African-Americans don't use drugs at a higher level than whites but wind up going to prison six times more. [...] We rate his claim Mostly True.

Not the answer you're looking for? Browse other questions tagged united-states recreational-drugs racism .

17
Do minimum wage laws disproportionately harm black employment?
17
Did Ehrlichman claim the reason for the Nixon drug war was to criminalize black people and hippies?
6
Do illegal immigrants commit more murders than mass shooters?
12
Does USA imprison people of color at a higher rate than whites for the same crime convictions?