During her speech at the Golden Globes, Meryl Streep said the following:

But there was one performance this year that stunned me. It, it sank its hooks in my heart. Not because it was good. It was -- there was nothing good about it. But it was effective, and it did its job. It made its intended audience laugh and show their teeth. It was that moment when the person asking to sit in the most respected seat in our country imitated a disabled reporter, someone he outranked in privilege, power, and the capacity to fight back.

Is this story true?

Trump certainly mocked a disabled reporter, a general, and Ted Cruz by making a particular motion.

It does not seem to be an imitation of his disability though.

Note that none of this means that Trump did not treat Kovaleski rudely.

Donald Trump did mock a reporter - Serge Kovaleski from the New York Times. Kovaleski has a disability: arthrogryposis.

Trump denied that he mocked him for his disability and claims that he didn't know what the reporter looks like. In addition, Kovaleski has no speech impediment and no spasticity1, as represented in Trump's imitation.

A report from CNN includes both the video of Trump mocking the reporter and a picture of the reporter, clearly showing that he is disabled.

Here is a screen grab of Trump next a picture of Kovaleski. Note again that Kovaleski doesn't suffer from shakes from spasticity. 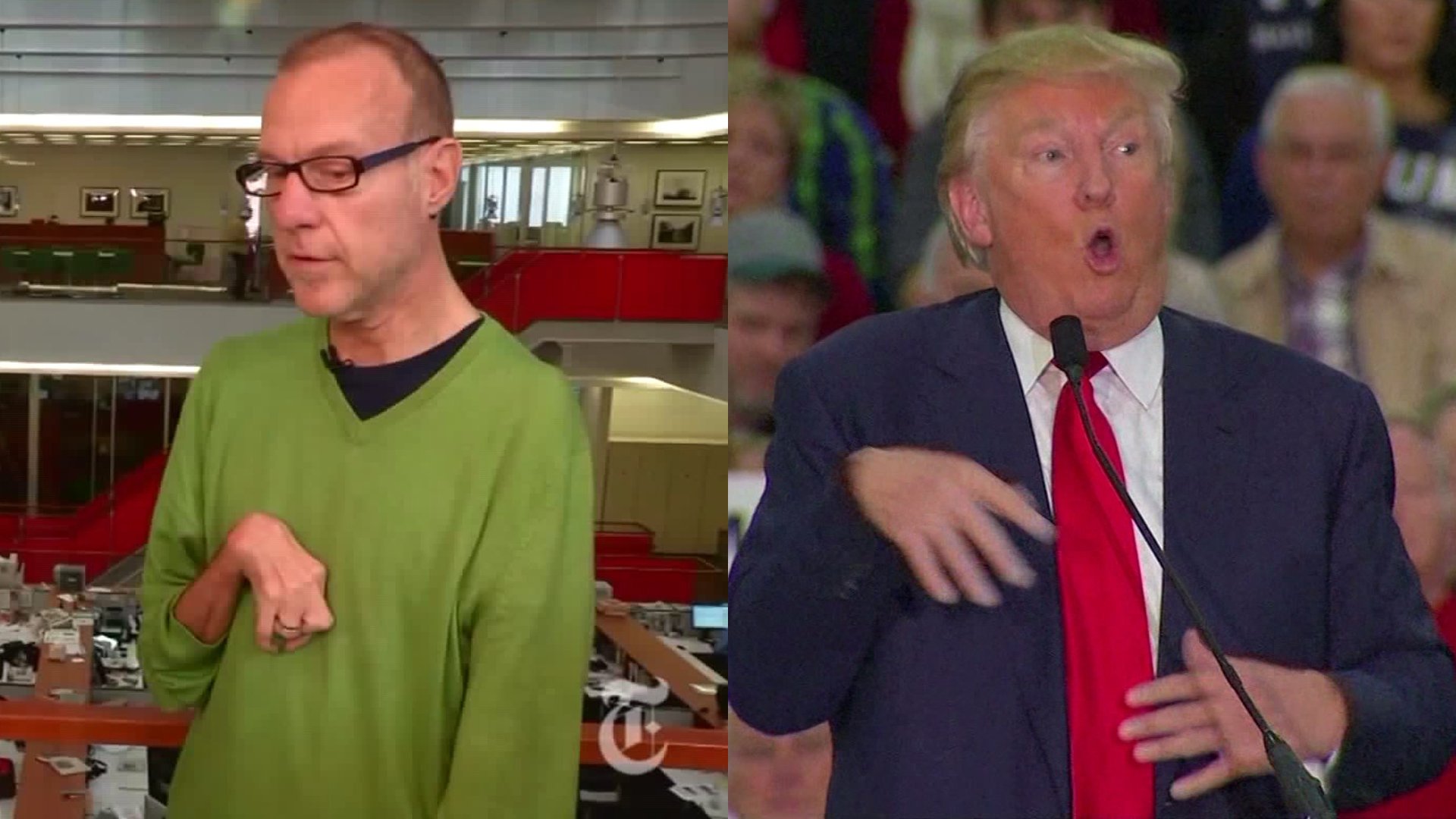 Snopes have an article dedicated to the incident. They quote Trump as saying:

I have no idea who this reporter, Serge Kovalski [sic], is, what he looks like or his level of intelligence. I don’t know if he is J.J. Watt or Muhammad Ali in his prime or somebody of less athletic or physical ability. Despite having one of the all-time great memories, I certainly do not remember him.

I merely mimicked what I thought would be a flustered reporter trying to get out of a statement he made long ago. If Mr. Kovaleski is handicapped, I would not know because I do not know what he looks like. If I did know, I would definitely not say anything about his appearance.

Donald and I were on a first-name basis for years. I’ve interviewed him in his office. I’ve talked to him at press conferences. All in all, I would say around a dozen times, I’ve interacted with him as a reporter while I was at The Daily News.

Somebody at the financially failing and totally biased New York Times said that, over the years, I have met Mr. Kovaleski. Serge Kovaleski must think a lot of himself if he thinks I remember him from decades ago — if I ever met him at all, which I doubt I did. He should stop using his disability to grandstand get back to reporting for a paper that is rapidly going down the tubes.

The Snopes article is well sourced, but I want to add another source, a report by KTLA5 that repeats the video and the claim that Trump mocked the journalist as well as Trump's responce, which is the same as Snopes:

If Mr. Kovaleski is handicapped, I would not know because I do not know what he looks like. If I did know, I would definitely not say anything about his appearance.

People have also found footage of Trump mocking other people in a somewhat similar way. In this video clip from Fox News, they show Trump mocking a "president of a bank", a U.S. general and Ted Cruz, including the clip of him mocking Serge Kovaleski. And a clip from a 2005 interview for Larry King, where Trump describes himself without a phone for 2 weeks in a similar way.

One thing I’ve noted that hasn’t been mentioned is that Trump’s mocking of the reporter did also include using a strange voice as you might find with someone whose disability affects their speech, or someone that has at least a speech slur. And the reporter Kovaleski has perfectly normal speech.

Although nothing here is 100% proven, I would consider this fact to lean the possibility more to the side of “Trump mocked a reporter who happened to be disabled” since this is a dissimilarity between Trump’s behaviour and that of the actual reporter, yet a similarity to the other instances of his mocking non-disabled people.

The videos I checked this on are:

So in summary: I’m more leaning toward the angle that Trump has used this bad habit one too many times, and this time it looks really bad.