Is this picture of a man in Colorado Springs nearly being blown away, genuine, or a hoax? 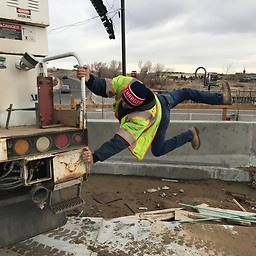 The post was from FOX21 News Facebook News Feed (January 9 2017, 5:20pm): Colorado Springs off Cimarron and I-25, this city worker is doing his best not to get swept up by the wind!

I wouldn't be surprised to find this is a hoax. Their left hand looks like it is pushing against the truck (supporting their weight), rather than stretched to hold on. Their right foot looks like it could be resting on top of the wood. The debris below looks like it is just sitting there. How is the person taking the picture able to do so while experiencing the same strong wind?

Marg Braddock Real or photo chopped? Either way it is an impressive picture!

Cody Pierce It's real just holding him self up

So the photo is a real photo. The guy is just holding himself up.

Yes, it's possible that this is not the real Cody Pierce, or a different one, or he's lying. But that seems to be evidence enough.

Not the answer you're looking for? Browse other questions tagged united-states weather photography .