This image is going viral on the web. 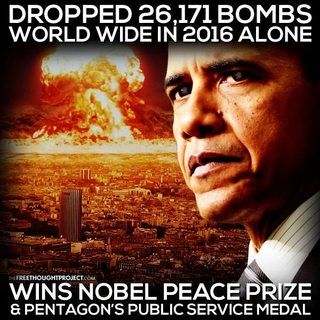 Sounds about right for a president who bombed 7 nations and became the first in U.S. history to be at war every single day of his eight year administration.

Did Obama order 26 thousand bombs to be dropped in 2016? And were these actions public until now?

This is an estimate, reported by large media organizations:

From the Council on Foreign Relations:

This statistic is still new, and it hasn't been disputed or accepted yet. It is possible that the methodology will have issues that are not immediately visible. But if the question is if this was made up just for Facebook, then no, it is not a made-up statistic. It has some basis in reality and has been accepted by real media organizations.

Sounds about right for a president who bombed 7 nations and became the first in U.S. history to be at war every single day of his eight year administration.

Is attributed to Ron Paul in the Zero Hedge post.

Not the answer you're looking for? Browse other questions tagged barack-obama .

12
Did Bill Ayers ghost-write for Obama?
6
Did President Obama issue an executive order to delay deportations of children?
24
Did Obama admit training IS?
1
Did Obama secretly visit Antarctica?
4
Did Obama give an iPod pre-loaded with his own speeches to the British Queen in 2009?
69
Did 122 Guantanamo prisoners released by Obama return to the battlefield?
6
Did Obama use the Espionage act to put reporters in jail?
74
Did Obama defy precedent by not visiting the D-Day monument?