Which Martin Luther said “Even if I knew that tomorrow the world would go to pieces, I would still plant my apple tree.”

I was wondering if this quote was from the German professor of theology, Martin Luther(1483-1546) as said e.g. here: 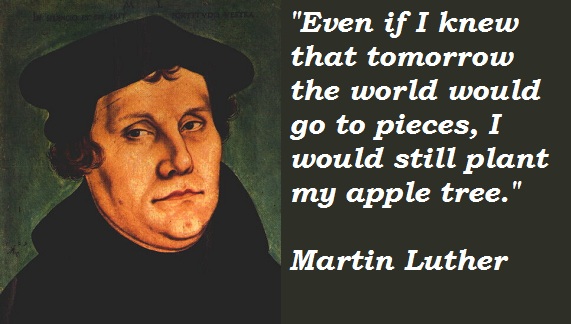 Both 'authors' are mentioned across the Internet.

Apparently neither originated it. From Martin Luther: A Very Short Introduction by Scott H. Hendrix:

So far however, this statement has not been found in his writings. Scholars believe it originated in the German Confessing Church, which used it to inspire hope and perseverance during its opposition to the Nazi dictatorship.

The statement then is normally attributed to Martin Luther (the German professor of theology, 1483-1546), but there is no documentation in his writings. Apparently it was attributed to him as early as 1944.

Incidentally, there is some controversy as to the origin of this quote. Legend actually has Martin Luther saying this. But there is no written record of the reformer speaking these words. Apparently, the first written evidence of this saying comes from 1944 by a priest named Karl Lotz. In any case, it was MLK Jr who popularized the quote. I was introduced to the quote by my close friend, Rev. Mike Ernst, who told me of it when we first spoke of my cancer.

However, no proof is given that Martin Luther King, Jr. ever said it either.

Strangely, the line was used on more than one occasion by Martin Luther King Jr. as well and it sometimes falsely attributed as original. But that is neither here nor there.

Anyway, no documentation it was originated by either. May or may not have been used by Martin Luther King, Jr.

Not the answer you're looking for? Browse other questions tagged quotes martin-luther-king .

24
Did Martin Luther King, Jr. say that “I will not rejoice in the death of one, not even an enemy”?
18
Did Japanese people misspell “We pray for MacArthur's election”?
9
Was Martin Luther King taped by the FBI while committing adultery?
17
Is “If you have nothing to hide, you have nothing to fear” a line used by Joseph Goebbels?
17
Did Golda Meir make this quote about curfews for women?
11
Did Ayatollah Ruhollah Khomeini, The Supreme Leader of Iran, say this about pedophilia?
27
Did Ben Gurion say this about conquering Palestinian land?
14
Did Martin Luther King Jr. say “Do you know that Negroes are 10 percent of the population of St. Louis and are responsible for 58% of its crimes?”
9
Did Charles Dickens say “The New Testament is the very best book that ever was or ever will be known in the world.”?