Can a television thrown in a bathtub kill someone?

In TV show or films, it seems that throwing any mains-powered electrical device (such as a television or radio) in a bathtub can kill the person in said bathtub.

Can this happen? It appears to me that power should shut down almost instantly.

Very simply, it could but with modern electrical safety systems, it's unlikely. A modern television is not earthed, as the casing is usually plastic, although some bigger sets have grounds. The reason for this is because the class Y capacitors used to filter EMI require an earth conductor. Bigger sets emit more EMI because they use more power, thus can require an earth connector. In which case, earth must be connected to exposed metal parts, if any.

If they have a direct ground, water is likely to short live to the earthed case and trip the RCD/GFCI within 30 ms, with a current as low as 30mA. A general rule is that you can feel 1mA, 10mA is painful and 100mA can stop the heart. As you can't get out, this leads to death... and it's not nice.

If not, then it could be fatal if the bathtub is not correctly earthed which according to regulations it must be. If the bathtub is earthed, the water will allow enough current to flow from live to earth to trip the RCD/GFCI. It would hurt, but you'd be able to get out usually. Modern household RCD/GFCI devices will trip on the current required to cause fibrilation - often much lower to make it safer.

Note that RCD/GFCI devices don't measure earth current but instead the imbalance between live and neutral so even without a proper mains earth for the bath they will work. All that is important is that the current has some way to avoid going from live to neutral. If that is through the plumbing, it could save your life, though any assailant throwing TVs at you is likely to have more devious plans in mind.

Whatever theory says, it does happen.

Modern safety systems ought to prevent it but it can and does still happen. The example below was reported this year in the UK. The report if from the London Evening Standard in march 2011:

A PLAYFUL boy of three may have knocked an electric heater into the bath he was sharing with his mother, killing them both, an inquest heard.

Filip and Liliana Arsene were electrocuted during January’s cold snap. Filip, the youngest of three children, could not be saved and was pronounced dead at the scene. His mother was taken to hospital but died the next day.

The boy’s father Vasilica, 37, told how elder son Marco, seven, went upstairs to find his mother and banged on the bathroom door, shouting for her...

In a written statement Mr Arsene, who has since left Britain, said daughter Dana shouted down to him: “Daddy, the door is locked and mummy isn’t answering.” He said he raced upstairs and, when his wife did not reply, forced the door open and found her and Filip lying in the bath with their heads partially submerged.

After taking the heater from the water, which gave him an electric shock, Mr Arsene pulled his son and wife out and tried to resuscitate them.

Paramedic Yvonne Cook, of the London Ambulance Service, said she found the upstairs of the house “in turmoil” with the family crying in the living room. She said other paramedics described the heater as “dripping wet and buzzing” when they first saw it.

An environmental health investigation found that the landlord’s safety certificates and the house’s electrical systems were all up to standard.

So it wasn't a TV but the question asked about electrical devices in general so I think it still counts as a yes it is possible.

There are a number of different configurations of the combination of water, electrodes, and victim which should be considered.

For a current to flow, you must have a complete circuit. Consider this most basic of circuits: 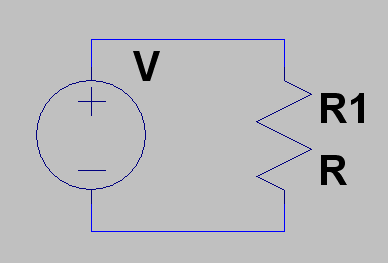 Next, consider the effect of parallel resistors: 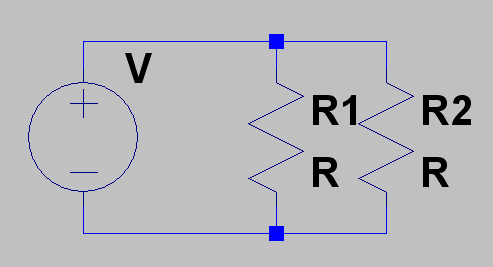 The resistance of a parallel combination of resistors is

The net current through the entire system (that which will trip the circuit breaker) is I = V / R_net. This current is divided through both resistors based on the ratio of their resistances so that Ohm's Law remains satisfied; the potential V = I * R must be the same for both resistors.

These schematics show resistors as individual components, in our scenario, we must use the scalar definition of resistivity, that is, ohm-meters, where:

I found no statistics for the conductivity of bathwater. I assume that it varies widely depending on dissolved soap or bath salts and impurities from the body, and, more usefully, that bathwater has a resistivity somewhere between that of seawater (2x10-1) and drinking water (2x101). That is, I estimate that a cube of bathwater with conductive plates at opposite ends would have a resistance of about 1 ohm between these plates (for any size cube).

The body has a dry resistance between the hands with large contact areas of as much as 100,000 ohms. When wet, this value drops to as little as 500 ohms. A current of 60 mA through the heart will cause ventricular fibrillation, so we require that the voltage across the body stays below 30 V when wet.

This last observation allows us to determine the answer for configuration #3. If the victim's hands are

Electrical current in a volume

This is a moderately difficult problem: 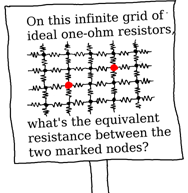 It is related to the sheet resistance problem, but we need to apply it to a volume. Picture a network of tubes between two electrodes (like the internet). A very small tube of water could be used to connect two electrodes in a straight line. Other tubes emanate from the same electrode, but because the first tube occupies the straight line path, they must take a slightly longer path to get there. In the end, there are also tubes which leave the electrodes in precisely the opposite direction of the other electrode, and curl around the massive bulk of tubes to return to the opposite side of the other electrode. These have high resistance, but are extremely numerous. Additionally, if you place the electrodes closer together, it doesn't matter how far apart the electrodes are, the resistance measurement will always be the same for a semiinfinite homogeneous substance.

Consider the circuit shown below: 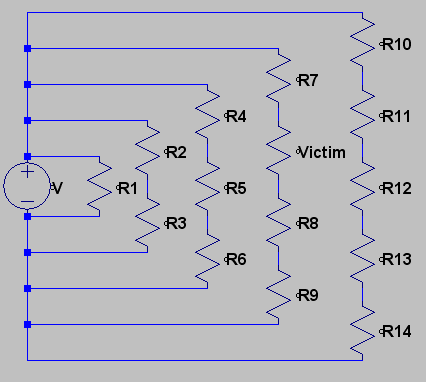 Note the victim in the third branch. This victim is not only bypassed by the low resistance of R1 and the low resistance combination of R2 and R3, as well as the higher resistances of other paths, but is also insulated by the water between the victim and the voltage source. Therefore, the victim is not at risk from low voltages in the dangerous range of 30V, but may (again, depending on the configuration) be vulnerable to large voltages such as those produced by lightning and electric eels.

Configuration 1 can be considered a semiinifite homogenous substance because the victim occupies an insignificant amount of the volume. The victim is in parallel with a great many low impedance paths, and will not be harmed.

Solution for Configuration #3, Case electrodes near each other:

Assuming that the electrodes are close together with respect to the volume of water, we can again treat the mass as a semiinfinite volume, which would have a very low resistance to the current flow between two electrodes close together. Even more so than the previous case, the victim is out of the current path, and out of danger for household voltages.

Actual numbers would require a more precisely defined situation and an actual experiment or simulation with HyperLynx or some such software package.

Configuration #3 is the most deadly variety. If you attempt to lift the appliance out of the tub, you complete the circuit and place yourself at risk. Configurations #1 and #2 are not usually dangerous.

(Mostly unrelated:) In researching some sources for this post, I came across this old book, wherein the patients to be cleansed of gold, silver, or mercury are immersed in a dilute hydrochloric (or hydrosulfuric, for lead of course) bath which is then connected to a battery for some electrochemistry for 20-30 minutes. "Occasional interruptions of the current so as to produce muscular contractions prove serviceable during the bath." Eeek. Bathing in acid? For medicinal purposes?

59
Does watching television damage the eyes?
38
Is watching television in the dark harmful to your eyes?
13
Is it illegal to use freely produced hydrogen in place of costly/taxed natural gas and gasoline, or to produce electricity?
20
Was Firefly pre-targeted for cancellation by Fox executives?
11
Are television programs designed for small children detrimental to their development?
2
Can high-frequency coil radiation kill disease? (e.g., Lakhovsky's multiple-wave oscillator [MWO])
10
Can voice signals be radio-transmitted to a human head acting as a radio receiver?
13
Is Russian TV airing a "hunger games" like reality series where contestants can rape, kill or be killed?
3
Did John Safran get a fatwa placed on Australian television host Rove McManus?
16
Can 'resonant frequencies' kill cancer cells?