How accurate are these nine charts of the economy under the Obama Administration?

I've seen the image below around and would like to know the accuracy of the charts. The original image I was sent was fairly low quality and a reverse image search lead to a bunch of right-leaning articles, but I would prefer a less biased examination. 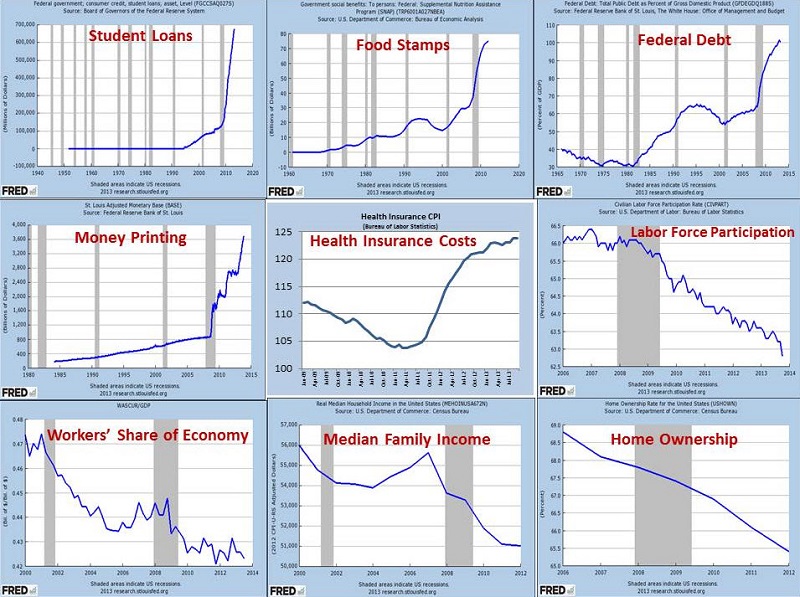 Note that the date ranges of the graphs seem to be cherry-picked, possibly in order to create the appearance of a trend, hide a continuing trend, or make trends seem much more dramatic than they actually are.

Here is what these or related images (i.e. sometimes using a different index for convenience) would look like if you use a consistent date range for all, beginning from January 1996 to January 2016 (or January 2015 if that's the most recent available). Recessions are shaded in gray.

"Federal government; consumer credit, student loans" has been increasing slowly from 1996, then increasing faster after the 2008 recession:

Food stamp assistance has been increasing since 2001, increased more quickly during and immediately after the 2008 recession, but has since plateaued and then began to decrease (note that the vertical range of the graph is $10 billion to $80 billion):

Federal debt as a percentage of GDP has been increasing slowly since 2002, increased much more quickly during and just after the 2008 recession, and then resume increasing slowly again (vertical range of graph is 50% to 110%):

Currency in circulation has been increasing steadily during the entire date range under consideration:

The consumer price index for medical costs for urban consumers (used because health insurance costs are not available in FRED) has been steadily increasing during the entire date range under consideration:

Labor force participation is decreasing slowly since 2001, and more quickly since the 2008 recession. Note that the vertical range of this graph covers six percentage points, 62% to 68%:

Workers' share of economy decreased sharply during and after the 2008 recession, but is now on an upward trend. Note that the vertical range of this graph is five percentage points, 42% to 47%:

Real median household income fell sharply during and after the 2008 recession, but has been increasing since 2012:

Home ownership had plateaued just before the 2008 recession, and has been decreasing since. The range of this graph is seven percentage points, 63% to 70%:

8 of the 9 (all but "Health Insurance Costs") indicate they are from "FRED", meaning the Federal Reserve Economic Data.

You can reproduce the graphs by going to the St. Louis Federal Reserve website

For example, for the housing data, you would click on the link and edit the graph to show annual data instead of quarterly data. Then you will see the OP is accurate, but out dated, not showing how homeownership continued to fall in 2013, 2014, and 2015.

As stated in DavePhD's answer, the data seems to be real. It can be argued that the presentation is misleading in some ways (cherry-picking of time intervals, the red labels don't exactly match the real description of the data which is almost impossible to read, y-scales don't always start at 0), and there is of course the problem of disentangling the effects of Obama's policies with those of the financial crisis, which started at approximately the same time.

Apart from that, I think there is some import context missing for several of these specific time series:

Quoting from the Wikipedia article Student loans in the United States:

The chart only shows the direct loans, so I would assume that most of the increase is the effect of students switching from private loans guaranteed by the government to direct government loans. This matches the timeline of this series fairly well, although the increase seem to have started in the second half of 2009.

Money printing is perhaps an odd term for St. Louis Adjusted Monetary Base. This metric includes government credit to financial institutions. The big jumps in this time series correspond roughly to the major rounds of Quantitative Easing instituted by the Federal Reserve, often referred to as QE1, QE2, and QE3. The Federal Reserve operates independently of the President, although its Board of Governors is nominated by the president. QE1 happened before Obama took office and only 3 of 5 Governors was nominated by Obama at the time of QE2 (and 5 of 7 at the time of QE3). The Chairman of the Board during all 3 rounds of QE was Ben Bernanke, who was nominated by George W. Bush.

SNAP benefits temporarily increased with the passage of the American Recovery and Reinvestment Act of 2009 (ARRA), a federal stimulus package to help Americans affected by the Great Recession. Beginning in April 2009 and continuing through the expansion's expiration on November 1, 2013, the ARRA appropriated $45.2 billion to increase monthly benefit levels to an average of $133. This amounted to a 13.6 percent funding increase for SNAP recipients.

This temporary expansion expired on November 1, 2013, resulting in a relative benefit decrease for SNAP households; on average, benefits decreased by 5 percent. According to a Center on Budget and Policy Priorities report, the maximum monthly benefit for a family of four dropped from $668 to $632, while the maximum monthly benefit for an individual dropped from $200 to $189.

ARRA was passed in congress with almost only Democratic support. However, my understanding is that the stimulus money from ARRA represent only a small part of the increase in SNAP spending. The money form ARRA was 45.2 billion, but the total additional spending compared to the 2008 level for the period 2009-2015 is 222.7 billion according to my calculations based on the data in this time series. I would guess that the rest of the increase in SNAP spending is due to more people qualifying for the program due to the lingering effects of the financial crisis.

Even better context to these charts (and the 6 other) could probably be given by dedicated experts on each area, but this is at least a start.

The Money Printing graph in the question shows the increase in the St. Louis Adjusted Monetary Base (BASE). You will note that this does not match the graph of Currency in Circulation from this answer.

This is a separate statistic from M0, M1, M2, and M3, which all look more like the Currency in Circulation graph, steadily increasing over time.

66
Do 33% of high school graduates never read another book for the rest of their lives?
79
Did a thief think he could conceal his identity from security cameras by putting lemon juice on his face?
38
Are these photos of protests posters against the Obama Administration real?
9
Is the average effective corporate tax rate in US only 15% in 2017?
13
Do one in three workers in Romania work for minimum wage?
10
Were 51,000 Pennsylvania jobs lost under the Obama administration?
1
Are these claims about the changes in the economy during Obama accurate?
11
Is this the flag of Niobrara County, Wyoming?