Did Trump win every income bracket over $48,000, but lost all below?

Rev. William J. Barber, II says that Trump "lost every income bracket below $48,000 and won every group above it". Is that true?

Via the Washington Post: Exit polls showed Clinton (represented in the below table as left/blue) leading among those in the < $50k income bracket. For higher income brackets, the difference (if there is any) is within the margin of error, i.e. a statistical tie.

Edison Research, which conducts the exit poll, gives some additional details in their FAQ:

What is the margin of error for an exit poll?

Exit polls are surveys. As in all surveys, there is a margin of error due to sampling. The margin of error for a 95% confidence interval is about +/- 3% for a typical characteristic from the national exit poll and +/-4% for a typical state exit poll. Characteristics that are more concentrated in a few polling places, such as race, have larger sampling errors. Other non-sampling factors may increase the total error.

This chart published by Business Insider and mentioned in another answer is from the same data, and presumably has the same sampling error, but they don't report the margin of error.

EDIT: the entire answer below is flawed. It (and the linked publication) fail to mention the margin of error; and there's a serious issue with confusing the aggregate (state) voting with individual voting. I'm only leaving this answer here because I think the dissection of this answer teaches something useful.

At least one publication says something very much like that: This set of charts shows among other things, victory margins by income, and yes, Donald Trump won every category above 50K per year.

But it's not that simple:

Strictly speaking, false, but only because Hillary won the $200,000-$249,999 bracket and tied the $250k+ bracket. At least according to exit poll data conducted by Edison Research (and used by CNN, ABC, et al.), whose reliability I cannot vouch for. (You can expect academic researchers to release more reliable data in the coming months.) 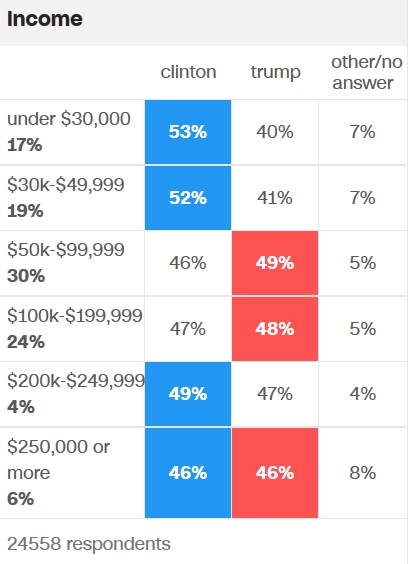 The reverend's $48,000 figure is also kinda weird. To my knowledge there's no poll with a cutoff point at $48,000. It's usually some nicer rounder number. 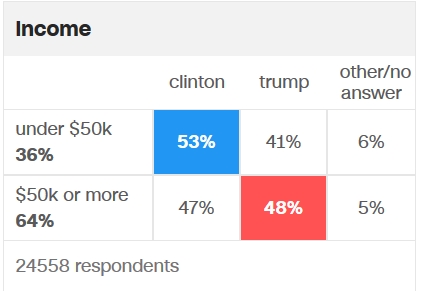 This may seem puzzling, given the "angry working-class" narrative. Here's a YouTube video that uses this puzzle to explain a statistical fallacy known as Simpson's Paradox. (TL;DW: Minorities tend to vote Democrat. Minorities are poor. So the Democrat candidate usually completely dominates the poor vote. In 2016, there was a huge swing in the white poor vote towards the Republican candidate this time, but Hillary still won the poor vote, albeit by a smaller margin than is usual for Democrat candidates.)

Not the answer you're looking for? Browse other questions tagged united-states politics donald-trump .

18
Has income tax been found unconstitutional by a court?
4
Did Trump fight against racial segregation at his golf resort?
34
Are there 2-3m illegal migrants with criminal records in the USA?
3
Are Twitter censoring positive responses to President Trump's tweets?
8
Is the median income for African Americans at an all time high?
23
Have Democrats attacked Trump's proposed wall as “medieval”?
9
Do US sanctions against Venezuela outweigh the aid being sent?
8
Did white supremacists “mix-in” with groups protesting George Floyd's death?