Has there ever been a cryptid proven to exist?

Has there ever been a cryptid proven to exist? A creature that general scientific consensus had regarded as being a myth for a long time, but finally proven to be real.

There are three confirmed animals on the list Konrad Rudolph provided:

(Though the turtle is most likely actually an already known species, just in an odd and not-usually-seen location.)

Two that are oddly (to me) not on the list are probably the most famous:

I can't work out whether the Platypus counts.

The story goes that when the first Platypus specimen was sent to England, it was perceived to be a fake (Ref) by the scientist, Dr George Shaw, who examined it with a pair of scissors in an effort to expose the fraud (Ref).

(The unreferenced web-sites I have checked differ in a few minor details: was it more than one naturalist who was doubtful? Can the scissor marks still be seen in the British Museum's specimen? I can't be sure.)

If one bloke from a museum in England can be counted as "general scientific consensus" (and perhaps, in 1799, he could!) then the platypus must count as a cryptid!

(There's a similar story about black swans, but I found even less evidence.)

Mountain Gorillas were cryptids back in the 1800's, before being a cryptid was cool. 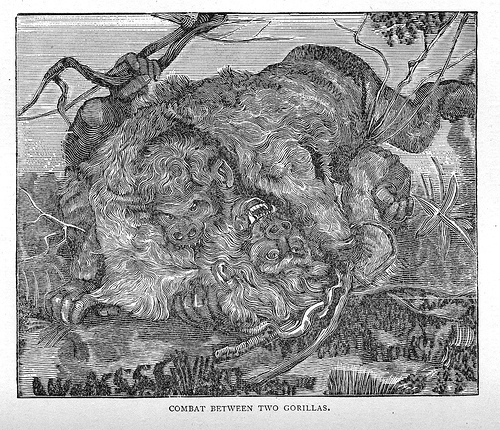 Gustave Doré did most of the etchings for the work.

Not the answer you're looking for? Browse other questions tagged zoology cryptozoology .

14
Are there any sightings of the Loch Ness Monster before 1933?
11
Has there ever been a thorough search of Loch Ness (for the Loch Ness Monster)
13
Do elephants never forget?
24
Can dogs smell fear?
22
Did humans see fish at the bottom of the world's deepest trench, the Mariana trench?
17
Is the theory of evolution disproved by bats?
6
Are yowies real?
10
Are pets as bad for environment as cars?
28
Has a human ever been eaten by an anaconda?
10
Does TNVR work to reduce cat populations?