Is it possible to pick up radio signals from dental fillings?

I recently heard this claim referred to on House M.D. when the titular character is experiencing phantom sounds, and the show appeared to give the idea some credibility. So I decided to look it up, but only found half hearted explanations or theories.

The question is three-fold:

electromagnetism dentistry radio
Share
Improve this question
asked May 25 '11 at 19:10

I've heard the story that at higher outputs (250,000 watts and up) than the traditional 50,000-watt "clear channel" stations, dental fillings became receivers. Here's someone who reports experiencing such an occurrence:

Your wifi, your cellphone, your Bluetooth, all have antennas buried in them. But at 800 or 1850 or 1900 or 2450 Mhz, their wavelengths are VERY short, a few cm of a metal strip against the plastic case under your hand. HF antennas at much lower frequencies must be longer, much longer. Here's a proper HF transmitting antenna: http://www.hawkins.pair.com/voanc/voanc14.jpg It's about 400M high for reference, but we can't fit it on the boat! It radiated to Europe for 50 years American propaganda, mostly for Russians. The transmitter was from 250,000 to 1,000,000 watts. I've been there when it was on the air. Your tooth fillings talk to you... (c;

Here's the antenna in question: 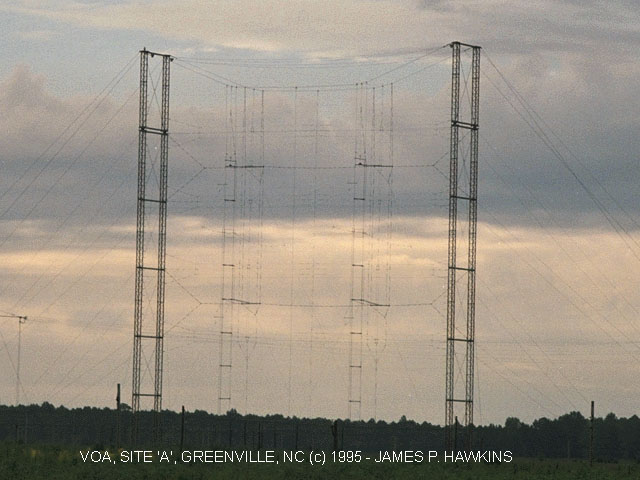 Maybe he's exaggerating, maybe not. Here's more testimony from the Geophysical Institute at the University of Alaska:

According to Robert Hunsucker, a professor emeritus at the Geophysical Institute with the University of Alaska Fairbanks, my phone isn't that complicated, and neither is a receiver circuit. A receiver is so simple, Hunsucker said, that anything from a phone to a person's mouth can act as one ... Hunsucker said the problem can sometimes be cured with a radio-frequency filter that can be attached to the phone line. He also said that if the radio signal is very strong, a filter might not be enough.

Such is the extremely rare case when a person's mouth acts as a receiver. The electrical conductivity of the human body can act as an antenna. A metallic filling in a tooth, reacting just so with saliva, can act as a semiconductor to detect the audio signal. The speaker in this case could be anything that vibrates within the mouth enough to produce noise, such as bridgework or maybe a loose filling. [Emphasis added.]

He says it's extremely rare, but he also describes how it could happen. Failure to reproduce the case by Mythbusters shouldn't hold any water in that case. A thing may be rare and difficult to reproduce, yet still happen.

Edit to add a further account from a seemingly credible source:

It's real. I attended a Field Day setup a few years ago, staged by the Westside Amateur Radio Club in Los Angeles. They had one of their stations inside a trailer, and the radio had an automatic antenna tuner. Well, SOMEBODY didn't ground the thing right. I was inside the shack about 5' from the radio when the op said, "Well, 15 meters is dead; let's tune it up on 20." He changed bands and hit the deadly little "Automatic Tune" button. The radio began buzzing as the tuner went to work. Also, I let out a scream as one of my teeth with a nice filling in it suddenly felt like a dentist was drilling in it with NO anesthetic! I RAN from that trailer uttering obscenities and the pain vanished as soon as I got clear of the thing. Needless to say I didn't hang around that particular shack much during the rest of the contest.

I am persuaded by the proximity argument. Since electromagnetic radiation diminishes proportional to the square of the distance, it is credible that running away would decrease the effect. If he was standing five feet away from the transmitter to start, ten feet would reduce the effect to 25%, 20 feet to 6.25%, etc.

NB The links have all rotted away over the past nine years, so I am removing them.

Snopes has an article regarding a story told by Lucille Ball of just such a thing happening to her personally. It's listed as 'undetermined' but does seem somewhat plausible.

So has this ever been documented? The folks at 'The Straight Dope' ferreted out two instances outside of Lucille Ball, one of which sounds like this exact phenomena. This would make it pretty rare, and might explain why the Mythbusters were unable to reproduce it.

Not the answer you're looking for? Browse other questions tagged electromagnetism dentistry radio .

10
Can voice signals be radio-transmitted to a human head acting as a radio receiver?

27
Is it possible to obtain current indirectly from power lines?
13
Are silver dental fillings safe?
10
Can voice signals be radio-transmitted to a human head acting as a radio receiver?
5
Is it possible to disable a vehicle with microwave oven magnetron from that distance