so it’s the exact opposite.

The claim to the contrary, for instance voiced here by Ian Plimer on ABC:

Over the past 250 years, humans have added just one part of CO2 in 10,000 to the atmosphere. One volcanic cough can do this in a day.

is an artful lie. This is exposed wonderfully in a comment to that article:

So Ian Plimer arrives at his assertion by comparing two different numbers: the number of overall increase in CO2 in the atmosphere (110 ppm), and a relative percentage of the atmospheric concentration (0.039 ppm), and alleges that these numbers are the same. That’s like saying that 10$ and 10% of 10$ (= 1$) are identical.

In addition to Konrad's excellent answer, another way we can know that volcanic CO2 does not exceed anthropogenic CO2 is to look for signs of volcanic eruptions in CO2 data. Here are the Mauna Loa data collected by the [Scripps Institution]:1 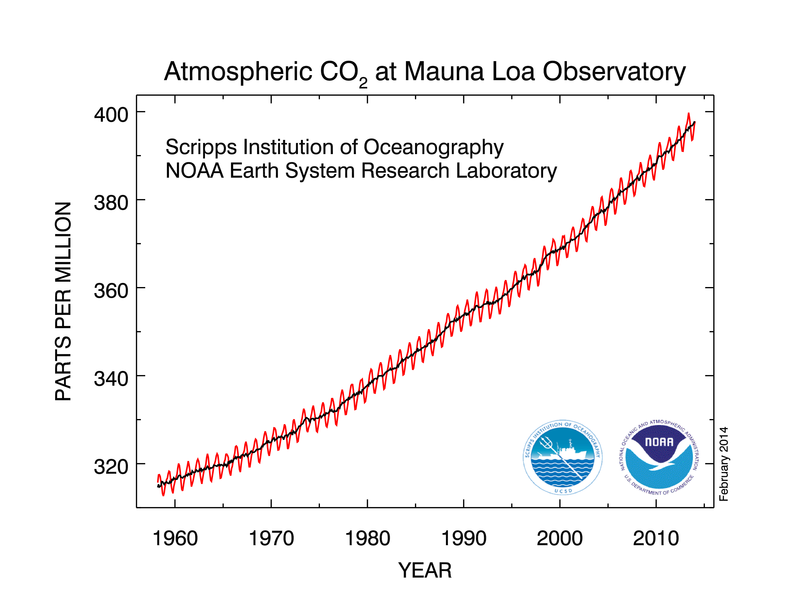 N.B. the pre-industrial CO2 level had been around 280ppm for several thousand years (see comments below). 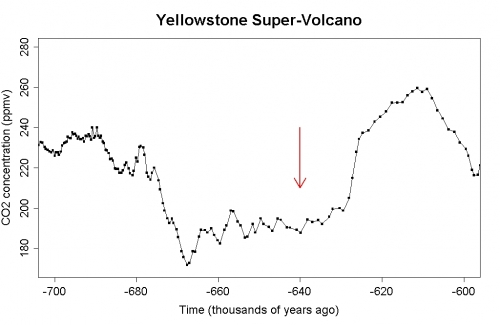 Taken from a very good article by Tamino, archived here, which gives a further three examples.

I am what my friends on the left would call a climate denier. However, a simple observation would be that if volcanoes emitted more CO2 that human industrial activity, then human industrial activity would not have resulted in the reversal in the decline of CO2 in the atmosphere to a low of 250 ppm at the start of the industrial revolution, and bringing it to the current level of just under 400 ppm.

To correct one misconception from the comments above - volcanoes do indeed add CO2 to the atmosphere, but burning fossil fuels only adds C to the atmosphere. The O2 part was ALREADY in the atmosphere, and combined with the C (and H) in the hydrocarbons/coal to make CO2 (and H2O). So human activity adds a little less than 10 billion tons of carbon to the biosphere per year. This subtle distinction is important when considering the carbon cycle in biological activity (respiration and photosynthesis). Burning fossil fuels adds carbon to the biosphere, which I believe is a good thing, since we are all carbon-based life forms.

Not the answer you're looking for? Browse other questions tagged environment climate-change .

10
Do candles emit ten times the carbon dioxide of an equivalent lightbulb?
6
Do women 'consume more sustainably than men'?
12
Is paying your bill online more environmentally friendly than post?
3
Is there more global sea ice than 35 years ago?
8
To what extent do needle trees contribute to fine dust pollution?
10
Do cows contribute more to atmospheric warming than cars?
8
Is there more forest in the Northern Hemisphere now than 100 years ago?
12
Do termites produce 10 times more CO2 than humans?
3
Are there currently more large fires in Africa and South America than the rest of the world?