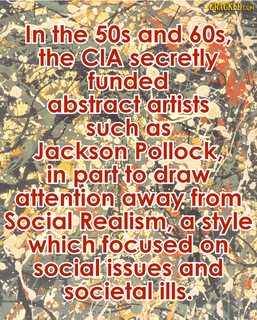 In the 50s and 60s, the CIA secretly funded abstract artists such as Jackson Pollock, in part to draw attention away from Social Realism, a style which focused on societal issues and societal ills.

There are two parts to the claim:

Social Realism is characterized by:

a naturalistic realism focusing specifically on social issues and the hardships of everyday life. The term usually refers to the urban American Scene artists of the Depression era, who were greatly influenced by the Ashcan School of early 20th century New York.

Socialist Realism was the official artistic movement of the USSR:

It was attached not only to the revolution but to the forward momentum of the communist ideology and Soviet apparatus...Socialist Realism had contradictory ambitions, which insured its failure as an art form. It inherently leaned on rigid past precedents of Realism in order to theoretically look forward, towards a Communist future. It was an artistic style at least partially-defined by its refusal to create.

Because in the propaganda war with the Soviet Union, this new artistic movement [abstract expressionism] could be held up as proof of the creativity, the intellectual freedom, and the cultural power of the United States. Russian art, strapped into the communist ideological straitjacket, could not compete.

The Central Intelligence Agency used American modern art, not from the Social Realism school (which was NOT abstract) but from Abstract Expressionism as a weapon in the Cold War. As a former CIA case officer, Donald Jameson said in the Independent UK article of October 1995 (emphasis mine):

I think that what we did really was to recognise the difference. It was recognised that Abstract Expressionism was the kind of art that made Socialist Realism look even more stylised and more rigid and confined than it was...the CIA fostered and promoted American Abstract Expressionist painting around the world for more than 20 years. 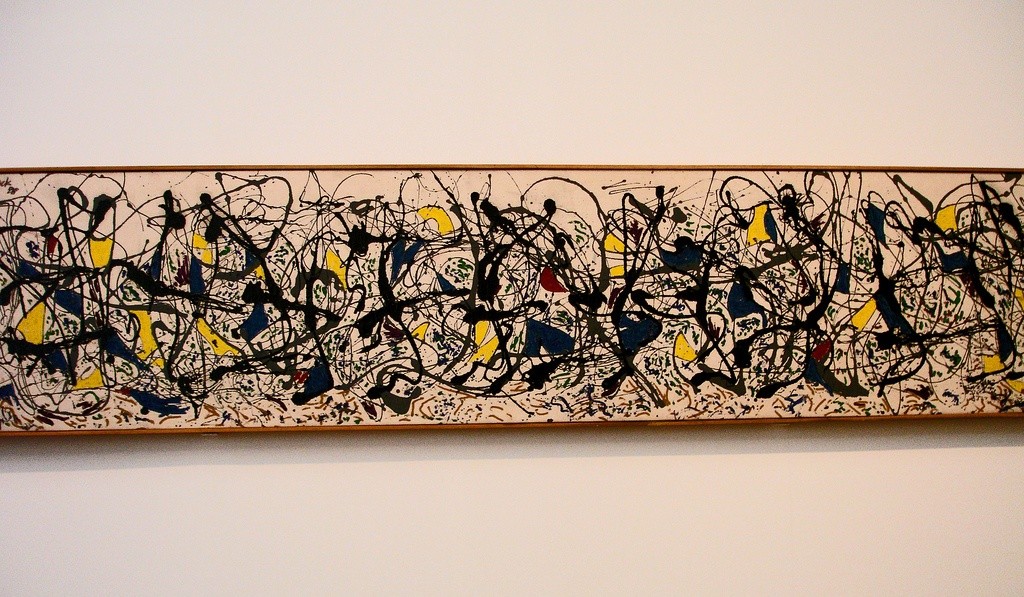 Socialist Realist painting, Lenin on the Tribune by Gerasimov 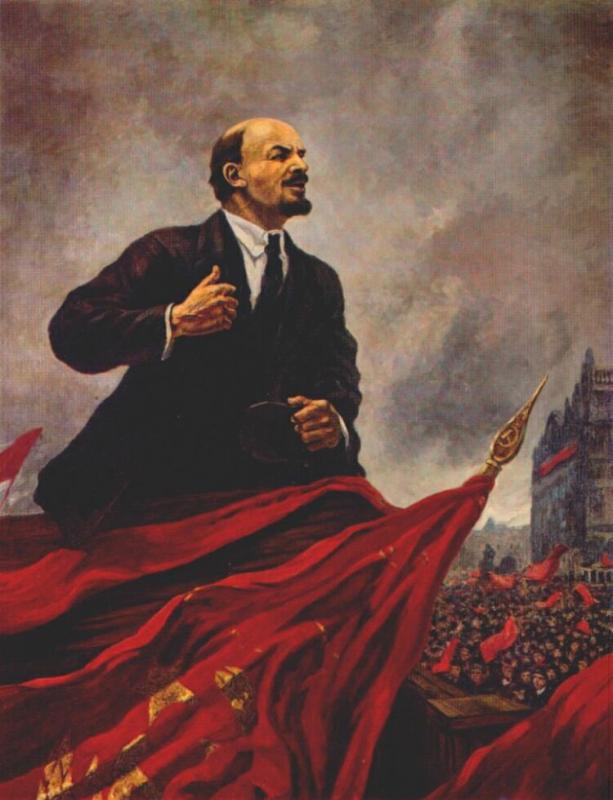 According to an article by The Independent, there are two sources for the funding of abstract expressionist art by the CIA: Donald Jameson - a CIA officer - and Tom Braden - former chief of the International Organizations division (IOD), which is 'the CIA office that "ran" the Congress for Cultural Freedom and Encounter magazine' (according to cia.gov).

Until now there has been no first-hand evidence to prove that this connection was made, but for the first time a former case officer, Donald Jameson, has broken the silence. Yes, he says, the agency saw Abstract Expressionism as an opportunity, and yes, it ran with it.
"Regarding Abstract Expressionism, I'd love to be able to say that the CIA invented it just to see what happens in New York and downtown SoHo tomorrow!" he joked. "But I think that what we did really was to recognise the difference. It was recognised that Abstract Expressionism was the kind of art that made Socialist Realism look even more stylised and more rigid and confined than it was. And that relationship was exploited in some of the exhibitions.
[...]
[Tom Braden: ] "We wanted to unite all the people who were writers, who were musicians, who were artists, to demonstrate that the West and the United States was devoted to freedom of expression and to intellectual achievement, without any rigid barriers as to what you must write, and what you must say, and what you must do, and what you must paint, which was what was going on in the Soviet Union. I think it was the most important division that the agency had, and I think that it played an enormous role in the Cold War."
[...]
He confirmed that his division had acted secretly because of the public hostility to the avant-garde: "It was very difficult to get Congress to go along with some of the things we wanted to do - send art abroad, send symphonies abroad, publish magazines abroad. That's one of the reasons it had to be done covertly. It had to be a secret. In order to encourage openness we had to be secret."
In 1958 the touring exhibition "The New American Painting", including works by Pollock, de Kooning, Motherwell and others, was on show in Paris. The Tate Gallery was keen to have it next, but could not afford to bring it over. Late in the day, an American millionaire and art lover, Julius Fleischmann, stepped in with the cash and the show was brought to London.
The money that Fleischmann provided, however, was not his but the CIA's.

And the BBC quotes David Anfam - an art historian:

He says it is “a well-documented fact” that the CIA co-opted Abstract Expressionism in their propaganda war against Russia. “Even The New American Painting [exhibition] had some CIA funding behind it,” he says. According to Anfam, it is easy to see why the CIA wished to promote Abstract Expressionism. “It’s a very shrewd and cynical strategy,” he explains, “because it showed that you could do whatever you liked in America.” By the ‘50s, Abstract Expressionism was bound up with the concept of individual freedom: its canvases were understood as expressions of the subjective inner lives of the artists who painted them.
As a result, the movement was a useful foil to Russia’s official Soviet Realist style, which championed representative painting. “America was the land of the free, whereas Russia was locked up, culturally speaking,” Anfam says, characterising the perception that the CIA wished to foster during the Cold War.

52
Did the CIA sell drugs in the US?
12
Did the CIA hire mobsters to stage riots in Iran during 1953 coup d'etat?
9
Did the CIA conclude that Uri Geller had psychic powers?
55
Did the CIA blow up a Siberian pipeline in 1982?
19
Did the CIA feed false information to McCarthy to discredit his true claims that they were infiltrated by Soviet agents?
1
Did the CIA have a plan to airdrop condoms over Russian soil as a way of psychological warfare?
6
Did a former CIA accountant testify that Lee Harvey Oswald was a CIA employee?
0
Did CIA interrogator Charlie Wise die?