It's a common movie scene. Someone falls in a large body of water and drowns, losing consciousness. Our hero rescues the victim, gives 10 seconds of CPR, emits various imprecations to the tone of "Wake up, g**damnit!" and our victim coughs up some water and wakes up.

CUT to Bremmer, who drives a terrified Marcy in an SUV. "We can all be together now, Rose," Bremmer tells Marcy. The car slows as it approaches a police checkpoint. Ashley and Derek roar up behind Bremmer who SLAMS on the gas. The SUV races for the lake and PLUNGES into the water. Derek dives in after the car and pulls Marcy from the passenger-side window. Just then, Bremmer opens his eyes and grabs Marcy's legs. Out of nowhere, Hotch appears and FIRES his gun underwater, killing Bremmer. Moments later, Derek administers CPR on Marcy. "Stay with me!" he yells. Suddenly, the girl GASPS and spits up a stream of water. She will live. Case closed ... or is it?
—"Criminal Minds" Out of the Light (2011) 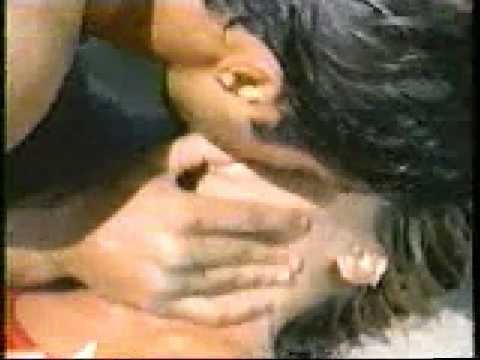 Are any of these supported by facts? If not, how would our hero save the damsel in distress in real life?

I don't know how many times I've seen CPR done on television where the patient immediately wakes without exhibiting any major outward signs of the effects caused by either the cause of the cardiac arrest or the CPR itself.

In the real world, this is very, very often not the case.

While there are some aspects of CPR as shown on television which are correctly portrayed, there are also some which are incorrect or at least inaccurate. Whether this is done for dramatic purposes or due to lack of knowledge on the subject is up for debate.

For the purposes of this answer, it will be much easier if we assume that all CPR done on television is done correctly.

The survival rates in our study are significantly higher than the most optimistic survival rates in the medical literature, and the portrayal of CPR on television may lead the viewing public to have an unrealistic impression of CPR and its chances for success. Physicians discussing the use of CPR with patients and families should be aware of the images of CPR depicted on television and the misperceptions these images may foster.source

The breakdown of this study by victim is as follows: 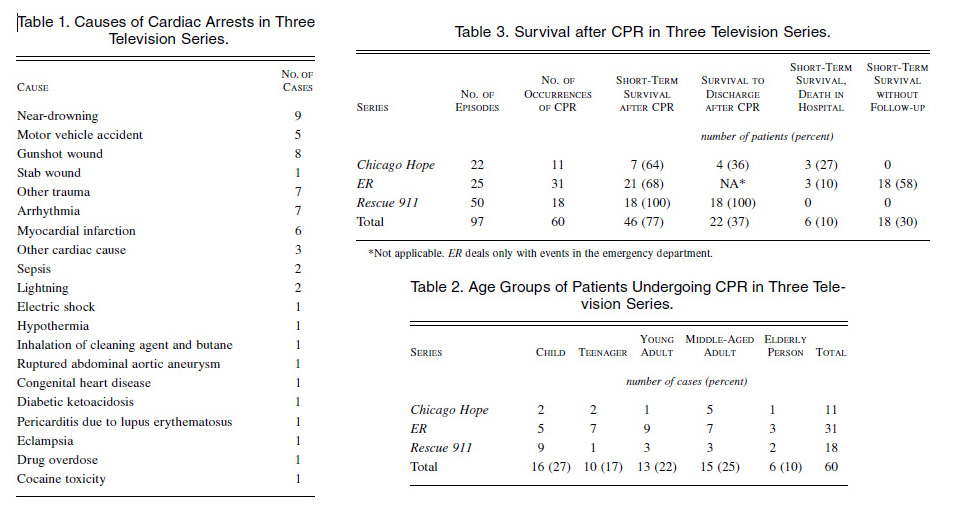 A more recent study examined 26 episodes of Casualty, Casualty, 25 episodes of Holby City, 23 episodes of Grey's Anatomy and 14 episodes of ER screened between July 2008 and April 2009 and came to a similar conclusion.

Whilst the immediate success rate of CPR in medical television drama does not significantly differ from reality the lack of depiction of poorer medium to long term outcomes may give a falsely high expectation to the lay public. Equally the lay public may perceive that the incidence and likely success of CPR is equal across all age groups. source

Already we can see that research indicates a sharp disparity between the effectiveness of CPR in reality and on film. Survey data cited by the Robert Wood Johnson Foundation further indicates that:

The public seriously overestimates CPR's effectiveness. A survey that included health care workers found that those who were over 65 years old predicted a 59 percent survival rate for a person treated with CPR. People under 30 were even more optimistic, predicting a 75 percent survival rate. source

This data sheds light on the fact that the success rate of CPR may not only be misrepresented by the media but by the textbooks as well...

Even more troubling, the surveyors found, was that those who had medical training estimated CPR's effectiveness at 75 percent! In an effort to understand why this would be so, the authors examined a standard text used to train health care workers and found only a brief acknowledgement that CPR was unlikely to be effective. The handbook that the Red Cross uses to teach its CPR classes to the public did not confront the issue of low CPR success at all. source

CPR in the real world

A: No. But it depends on if the person receiving it was actually in cardiac arrest to begin with. And what was wrong with him in the first place.

As we've already seen, the effectiveness of CPR (when done correctly) varies widely, even when combined with other therapies.

Despite the development of electrical defibrillation and the more recent implementation of lay rescuer defibrillation programs, the vast majority of these victims do not leave the hospital alive. In studies over the past 15 years, only 1.4% of patients with out-of-hospital arrest in Los Angeles, Calif, survived to hospital discharge; in Chicago, Ill, the number was 2%, and in Detroit, Mich, it was <1%. Conversely, a few municipalities such as Seattle, Wash, report much higher survival rates from SCA—more than 15% in 1 study—which suggests that survival rates need not remain so low. Recent work in Europe and elsewhere has confirmed that a higher survival-to-hospital discharge rate is indeed a realistic goal, with survival rates as high as 9% reported in Amsterdam and 21% in Maribor, Slovenia. source

Given the innumerable causes which can lead to cardiac arrest, I obviously cannot address them all, however, there may be some instances when CPR alone can be lifesaving, or appear to the lay rescuer that it is lifesaving.

Recent revisions of standards by the American Heart Association no longer call for lay-people to perform a pulse check prior to initiating CPR if they find an unconscious victim who appears not to be breathing. So, the person receiving the CPR may not always be in cardiac arrest.

It's possible in these situations for the painful stimuli to rouse the unconscious (usually intoxicated) person in a manner similar to what is seen on tv. To the lay person and to bystanders without medical training, this would look exactly like what is pictured on tv.

The human heart requires both electrical and mechanical activity to pump blood effectively. A patient who is pulseless and not breathing may not necessarily be "flat-lined" and in certain cases, the inititation of CPR immediately may have an effect similar to that of a precordial thump(which is now reccomended in certain situations), in that the force of the impact induces an electrical stimulus which jolts the heart out of a non-perfusing rhythm.

In Ventricular Fibrillation, the heart's activity looks like this, but the person will NOT have a pulse (again, because in this rhythm, the heart is unable to effectively pump):

In true asystole (flatline) there is neither electrical nor mechanical activity in the heart:

However, without an EKG it is impossible to tell which rhythm a person's heart is in, and there is some chance (although probably quite remote) that the initial compression of CPR might jolt a person out of the first two, but not the third.

In reality, reversing a cardiac arrest is dependent largely on fixing the underlying cause. CPR is mainly effective by continuing to perfuse the body's tissues (especially the brain) with oxygen (and some other things), which will lessen damage and increase the chance of survival while other treatments (which are more effective at increasing survival rates) are administered. Typically, this involves electrical, drug, or surgical treatments. Although there are many variations, here is one example of an ACLS protocol for treating a cardiac arrest in full asystole, as you can see, it often requires much more than just CPR. 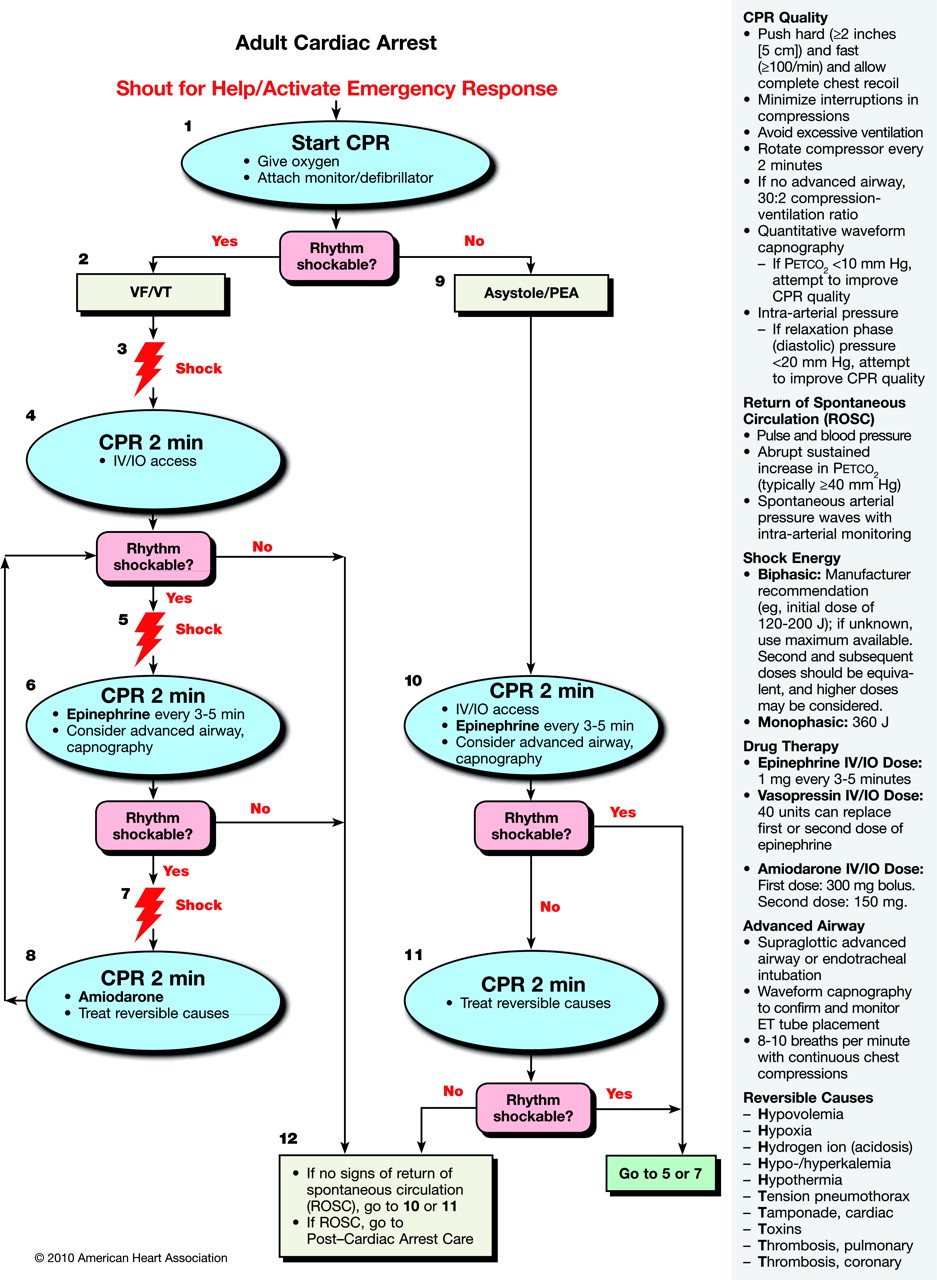 An often unaddressed factor in television is the potential for injuries caused by the CPR itself:

The most common injuries from chest compressions are rib fracture (∼30 percent) and sternal fracture (∼20 percent). Other common complications include aspiration, gastric dilatation, anterior mediastinal hemorrhage, epicardial hematoma, hemopericardium, myocardial contusion, pneumothorax, coronary air embolus, hemothorax, lung contusion, and oral and dental injuries. The liver is the most commonly injured intraabdominal organ, with rupture occurring in about 2 percent of cases. The spleen is infrequently injured and ruptures in less than 1 percent of resuscitation attempts.

Complications may occur even with properly performed CPR, especially rib and sternal fractures. The possibility of injury should not deter the vigorous application of CPR, since the outcome without effective resuscitation is certain death. Life-threatening injuries from CPR, such as laceration of the heart or great vessels, are rare. Proper techniques will lessen the incidence of serious complications. source

Q: Is CPR actually effective on someone who breathed water?

A: Sometimes, but not as often as television would have you think.

There is some debate about the effectiveness of rescue breathing in CPR, and in fact, lay rescuers are now taught a compressions-only method.

A study done in a lifeguarded waterpark environment yields the following information:

The numbers here seem to indicate a much more impressive success rate than demonstrated above with CPR, but to understand how this works, it's important to understand the physiology of drowning.

The data appears favorable, mainly because these victims are often unconscious, but not yet in cardiac arrest. Also, the age of the patient, time spent without oxygen, and many other factors can affect survival rates.

When water enters the lungs the victim's blood chemistry is rapidly altered, often leading to heart failure. In fresh water drownings inhaled water is immediately absorbed into the blood causing hemodilution. The diluted blood quickly leads to heart failure due to ventricular fibrillation, a condition simply described as shivering of the heart, or anoxia (oxygen starvation). Sea or salt water creates the opposite effect. Water is drawn from the blood into the lungs. This process causes the blood to become more concentrated, leading to an increased load on the heart and heart failure. Older drowning victims may experience immediate heart failure as a result of the initial trauma of drowning, particularly in extremely cold water.source

How does the drowning process happen?

A very basic outline of the drowning process:

*The time that this takes is variable, but it could be as little as 12 to 20 seconds from the first panic to unconsciousness. source

A book on forensic pathology details the process a little more delicately: 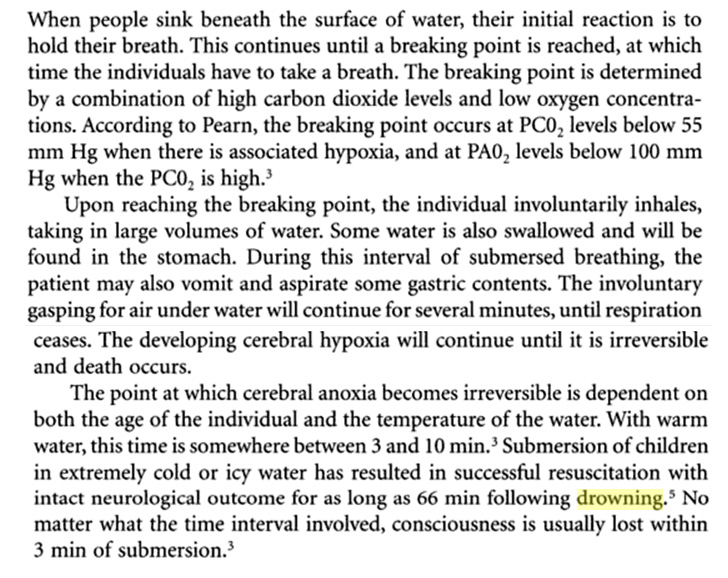 So, it could be argued that (since we have no way of knowing) some of the drowning victims portrayed in shows like Baywatch are in the very earliest stages of drowning and have only gone unconscious rather than gone into cardiac arrest, which would make their resuscitation plausible.

However, it does seem awfully convenient that they often revive their victims consistently in the most dramatic (yet, consistently vomit-free) way possible. Again, as it would seem is often the case with television and film, those telling the story tend to cherry-pick the most convenient and plot-friendly aspects of CPR.

Not the answer you're looking for? Browse other questions tagged medical-science mortality water .