Did European Muslim protestors carry signs “Shariah for the Netherlands”, “Islam Will Dominate the World, Freedom Can Go to Hell”

Does the following alleged photograph represent an actual demonstration by real self-identified Muslims, in Europe? 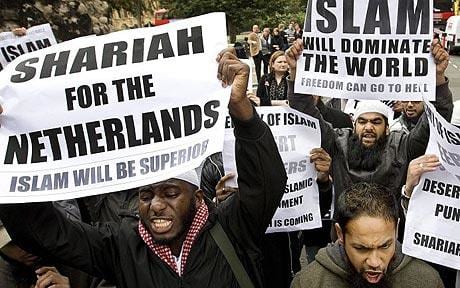 The photo is real, it was group of about 20 people protesting the arrival of Dutch MP Geert Wilders in Britain in 2009 as described by this article

That being said, I feel compelled to point out that this in itself doesn't substanciate the claims made in the article the OP posted, some of which have been debunked a number of times, including on this site.

Just mentioning that in case the OP is trying to evaluate the reliability of the article by examining the authenticity of the photos.

Not the answer you're looking for? Browse other questions tagged law islam united-kingdom europe netherlands .