Did Ayatollah Ruhollah Khomeini, The Supreme Leader of Iran, say this about pedophilia?

In an article on FaithFreedom.org, Jennifer King claims:

"A man can quench his sexual lusts with a child as young as a baby. However, he should not penetrate. Sodomizing the baby is halal (allowed by sharia). If the man penetrates and damages the child, then he should be responsible for her subsistence all her life. This girl, however, does not count as one of his four permanent wives. The man will not be eligible to marry the girl’s sister. It is better for a girl to marry when her menstruation starts, and at her husband's house rather than her father's home. Any father marrying his daughter so young will have a permanent place in heaven." 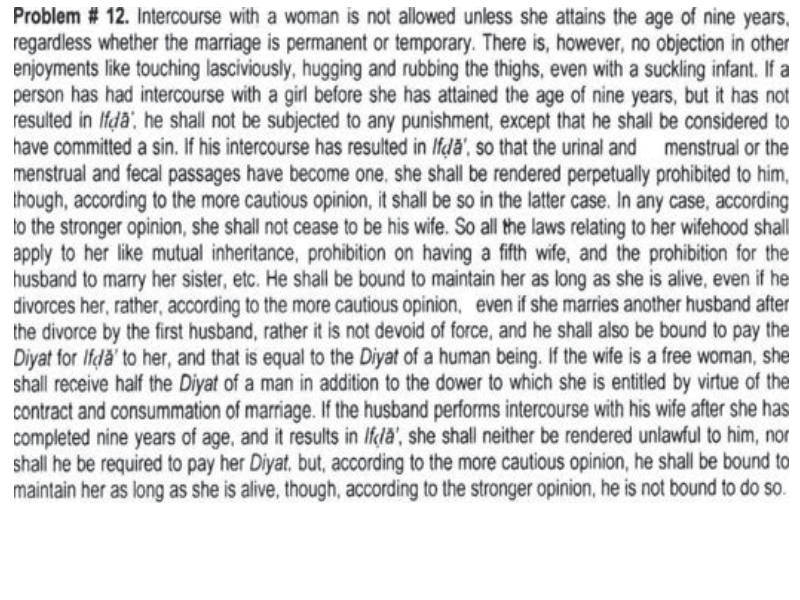 The untranslated word Diyat is, in Islamic law:

the financial compensation paid to the victim or heirs of a victim in the cases of murder, bodily harm or property damage.

The untranslated word Ifda' means "tearing" according to one reference and the urinary tract and vagina being one according to another reference.

This English translation of the book is by Dr. Sayyid Ali Reza Naqavi, former professor of Shi'ah jurisprudence, Islamabad University, who has a doctorate in Persian language and literature from Tehran University.

The book is translated in four parts, presented page by page with the original language.

Part 3 (the part with the section on marriage law)

So Khomeini is saying that, intercourse is permitted only if the wife is at least 9 years old, but other forms of sexual activity are permitted regardless of the age of the wife, even if she is so young that she is an infant being breastfeed.

Then Khomeini explains, that while it is a sin, there should be no legal punishment if the husband does have intercourse with the under 9 years old wife.

Not the answer you're looking for? Browse other questions tagged quotes islam .

11
Are forced marriages allowed in Iran?