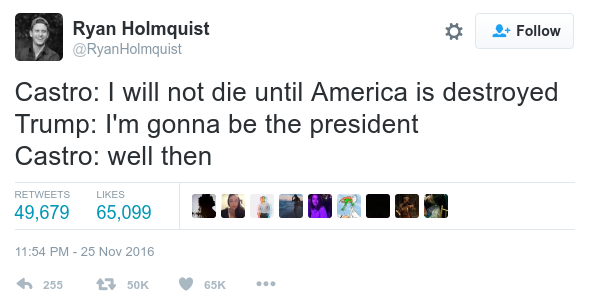 Castro: I will not die until America is destroyed

Trump: I'm gonna be the president

There are quite a few other tweets along the same lines. You can also see this popular meme going around (over 10k shares) 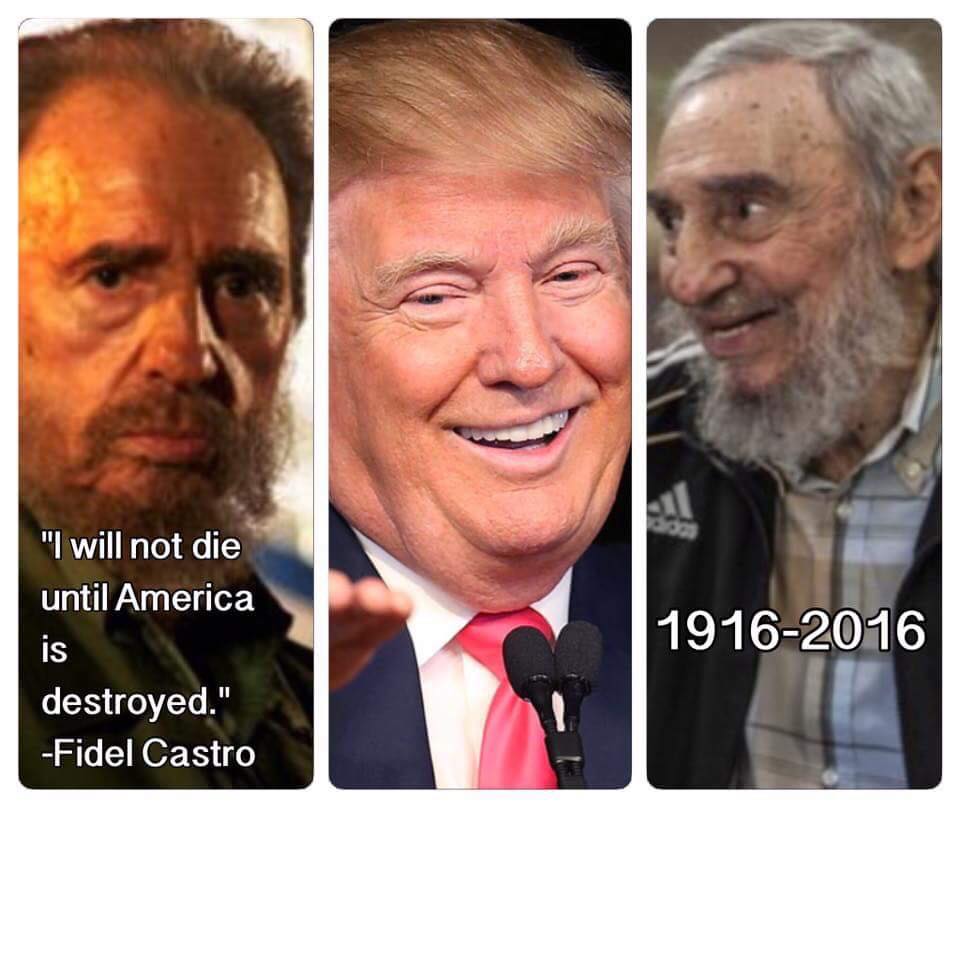 Did Castro ever say "I will not die until America is destroyed."

It is not an accurate quote.

Some time ago, the United States was an English colony. If an Englishman were asked if the United States would be independent, he would have said no, that it would always be an English colony. Afterward, the colonies liberated themselves, a nation was established, but it contained slavery. The slave owners would have said that slavery would never disappear, but slavery ended, salaried workers came, capitalism came, it developed extraordinarily, large multinational enterprises developed, and if a reasonable man is asked now if that will be eternal, he will have to say no. Someday the capitalist system will disappear in the United States, because no social class system has been eternal. One day, class societies will disappear. But you can be calm, I do not foresee in a short time any change toward socialism in the United States.

So Castro predicted the United States eventually becoming socialist, rather than being destroyed.

Also, in the same interview he said:

So clearly he did not hold the view mentioned in the OP.

which illustrates the geographically inclusive nature of the term "America" and an additional reason that Castro would not say that "America" would be destroyed.

No. It's a rumour. It was first tweeted by https://twitter.com/RyanHolmquist in 25 November after the announcement of Fidel Castro's death. He said in a latter tweet:

So – funny thing chuckles – these people on the Internet, they think Castro said he wouldn't die until America was destroyed? What? Hahhhh

indicating that he himself doesn't believe in the quote he posted. He said in another tweet that was posted 23 hours and 50 minutes after the tweet about the quote:

Thanks for making my day, Twitter. I'm truly grateful. Glad we can share jokes –though, I believe compassion is needed today more than ever!

indicating that the quote was posted as a joke. 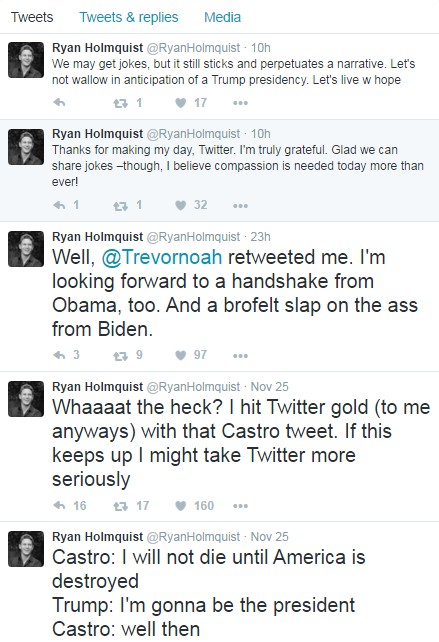 Also, the claim about the quote is rated as false by Snopes.com.

Immediately after Castro died, a joke emerged that Castro had once quipped he would not die until "America was destroyed." Later versions of the were typically accompanied by a photograph of a smiling or laughing Trump.

Most likely the phrase was made up for the joke, then subsequently that's been quoted as having actually being said by Castro.

I attempted a search from the older web (pre 2011) on Google and couldn't find anything outside the joke incorrectly indexed as old. I can't really give a reference for this since it's negative evidence.

Not the answer you're looking for? Browse other questions tagged united-states quotes fidel-castro .

24
Did Martin Luther King, Jr. say that "I will not rejoice in the death of one, not even an enemy"?
0
Did Malala Yousafzai ever say "socialism is the only answer"?
10
Did CIA plot to overthrow Fidel Castro by staging the Second Coming, making him lose his beard or getting him high on radio?
21
Did Fidel Castro ever make this prediction?
2
Did Ariel Sharon say that the Jewish people control America?
5
Did Fidel Castro put gay people into concentration camps?
12
Did Comey say that Trump did not try to obstruct justice?
3
Did Karl Marx ever say "Life is struggle"?
10
Did Charles Dickens say “The New Testament is the very best book that ever was or ever will be known in the world.”?
15
Did Napoleon say: "Man will believe anything, as long as it’s not in the Bible"?