Does the Dakota Access Pipeline (DAPL) meaningfully increase the risk of water contamination?

There are many environmental problems with fossil fuels (climate change being the most obvious), but specifically regarding water pollution, how big of a threat to local water supplies is the Dakota Access Pipeline?

From what I've found online, most of the arguments in favor of the pipeline come from biased sources, but these points stood out to me:

Is the existing Northern Border Pipeline (which is natural gas as opposed to DAPL's crude oil) a comparable environmental hazard, or is DAPL provably more risky?

This claim is rather vague, as safety could refer to a lot of things. Is DAPL less likely to cause environmental damage than existing oil transport methods in the area?

Is the existing Northern Border Pipeline (which is natural gas as opposed to DAPL's crude oil) a comparable environmental hazard, or is DAPL provably more risky?

LNG is normally stored and transported in liquid form at a temperature of approximately −161 °C (−258 °F). If this cooled liquid is released from a storage facility, pipeline, or LNG transport ship, then it begins to warm. As LNG warms above its storage temperature, the liquid begins to vaporize. The resulting gas produced by this warming is typically methane, which is the major component (with some ethane) of natural gas.

So long as the gas does not ignite, and people don't suffocate from the gas, it just dissipates into the atmosphere. Of course, methane is a greenhouse gas which would still impact global warming to some extent, but let us not get side-tracked.

On the other hand, crude oil spills are messy and do not dissipate so-readily. They tend to cause lasting environmental problems and require expensive cleanups that aren't completely effective.

I think it's worth mentioning, even if the risks of environmental damage by a spill were comparable, doubling the number of pipes would effectively double that risk for that area, which by itself would still be problematic.


This claim is rather vague, as safety could refer to a lot of things. Is DAPL less likely to cause environmental damage than existing oil transport methods in the area?

I suppose this claim depends on how you define "safety". If we define it as "amount of oil spilled", which seems the most-relevant to the environmental concerns, then the statistics may not back this claim.

A December 2014 report by the Congressional Research Service on this issues contains the following bar-chart. 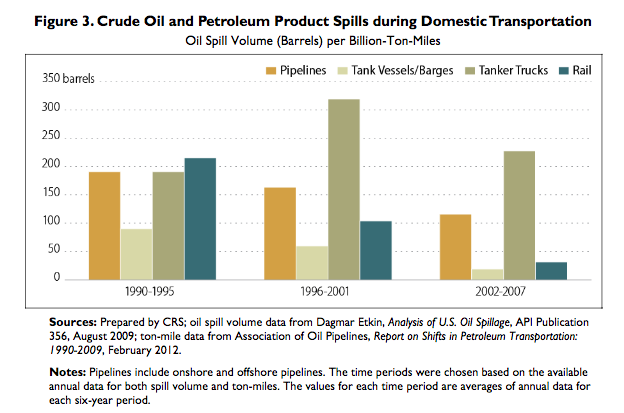 Assuming that the most-recent stats are still roughly accurate, then pipelines spill a smaller percentage than tanker trucks, but more than both railroads and tanker ships combined.

One small caveat that I think should be addressed here is that they specifically say "underground pipelines", but this chart does not differentiate. However if we take one industry website's word, most pipelines are actually underground.

Most crude oil pipelines are underground, except for pump stations and valves.

How the different transportation methods specifically impact this one area is perhaps a little less-clear, aside from the obvious difference of not having a crude oil pipeline crossing the river. A similar earlier plan involved crossing the Missouri River north of Bismarck was rejected at least in-part due to protest and concern for water safety there.

Not the answer you're looking for? Browse other questions tagged united-states environmental-health .

16
Does consuming fluoridated water reduce IQ?
9
Does organic food have less heavy metal contamination than non-organic food?
4
Does "hard water" cause eczema?
9
Does the DVORAK keyboard layout reduce the risk of Carpal Tunnel Syndrome?
6
Is Giardiasis a significant risk of drinking untreated water in pristine backcountry areas in North America?
5
Does Daylight Savings Time lead to an increase in car accidents and work related injuries the week afterwards?
9
Does sharing earphones increase the risk of middle ear infections?
12
Does every major pipeline in the US cut through Native American lands?
53
Did the CIA blow up a Siberian pipeline in 1982?