Is this refutation of Climate Change scientifically valid? [closed]

Skeptics Stack Exchange is for challenging unreferenced notable claims, pseudoscience and biased results. This question might not challenge a claim, or the claim identified might not be notable.

From this article. I don't like Breitbart as a source but I try hard to make sure I don't dismiss entirely their claims without reason. I'd like help interpreting their claims.

A German professor has confirmed what skeptics from Britain to the US have long suspected: that NASA’s Goddard Institute of Space Studies has largely invented “global warming” by tampering with the raw temperature data records.

Professor Dr. Friedrich Karl Ewert is a retired geologist and data computation expert. He has painstakingly examined and tabulated all NASA GISS’s temperature data series, taken from 1153 stations and going back to 1881. His conclusion: that if you look at the raw data, as opposed to NASA’s revisions, you’ll find that since 1940 the planet has been cooling, not warming.

They cite, in part, this pair of graphs:

to show that NASA has been tampering with the historical record with bogus adjustments to create the illusion of warming rather than cooling.

Doing some digging, I'm a little disinclined to believe these claims. I created a version of the first chart that goes further back - 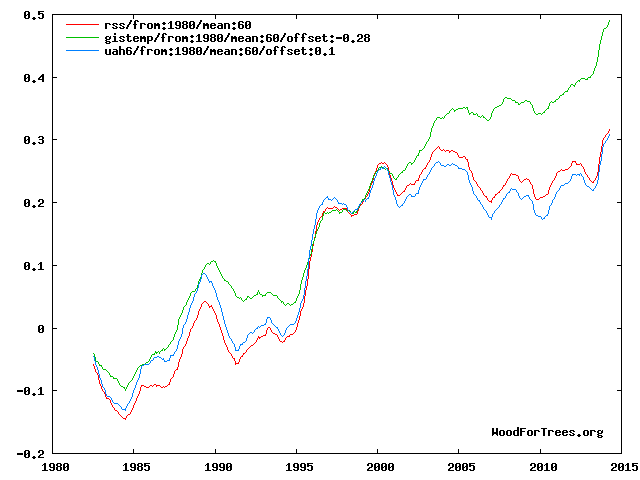 so you can see there's a warming trend in all three data series over the longer term. However, I would still like to know:

I have a good knowledge of math and statistics but little in depth understanding of climate science so any leads are helpful (even if just pointers to good learned resources).

Looking at raw data alone to draw a conclusion illustrates a lack of sophisication in data analysis or attempts to data mine for anomalies to support a predetermined conclusion.

I found, I think the original document for Hwert's analysis. But it is in German and I do not know German. I would be very interested in his exact methodology. If he didn't use raw data alone as suggested in the article, I will gladly retract my criticism.

We are a little all over the place on this question but I think I can answer the reason for homogenisation and the heat island effect. I would like to think this also answers the title question, "is this refutation scientifically valid." This is not a refutation of his data directly, but more a rebuttal to the described criticisms.

Raw data can contain noise that can render it almost meaningless unless you homogenize it; this should be something they teach you in first level statistics. The point of statistics is to cut through the noise, your biases and get to the real truth of the hypothesis.

The one use of homogenisation is to control for the 'heat-island effect' In short, urban areas have the tendency to heat up quick, become thermal sinks, and generally stay warmer when compared to the neighbouring areas. You have to extend beyond this and account for the altitude of the instruments too. These are micro-climates that must be accounted for when processing your data or you are going spurious results that don't reflect reality.

To link to an article by the NASA GISS group, you will see they spend a decent amount talking about homogeneity. If you don't homogenize you data you could be comparing apple to oranges in the same dataset.

The goal of the homogenization effort is to avoid any impact (warming or cooling) of the changing environment that some stations experienced by changing the long term trend of any non-rural station to match the long term trend of their rural neighbors, while retaining the short term monthly and annual variations. If no such neighbors exist - or the overlap of the rural combination and the non-rural record is less than 20 years - the station is completely dropped; if the rural records are shorter, part of the non-rural record is dropped. Source

The graphs on the linked Breitbart site are of specific places. We have no context of the geography, the climate, the changes of land use, etc. For all we know (and probably should suspect), they simply cherry picked a graph that supported their conclusion while skipping a dozen that showed otherwise.

I'm no expert by any means, but I stumbled upon your question and did a little research myself.

From this source, it appears that the homogenisation of the temperature data is made to account for the difference between the reading, which is regional, and some variable which is not the climate, which may not be linked to the region.

The goal appears to be the taking of data from the equipment at one location to create regional data that reflects the region, rather than the one point on the map where equipment is stationed.

Next to changes in the climate itself, raw climate records also contain non-climatic jumps and changes for example due to relocations or changes in instrumentation.

So homogenisation is an attempt to account for the errors induced by changes not induced by climate or weather.

On NASA's website, they have a FAQ page where they answer why raw data cannot be used. I am quoting the answer below:

Just averaging the raw data would give results that are highly dependent on the particular locations (latitude and elevation) and reporting periods of the actual weather stations; such results would mostly reflect those accidental circumstances rather than yield meaningful information about our climate.

In addition, NASA states that their data is homogenised, as @RomaH mentioned, to account for the effect of urban warming in cities. Source

One of the improvements — introduced in 1998 — was the implementation of a method to address the problem of urban warming: The urban and peri-urban (i.e., other than rural) stations are adjusted so that their long-term trend matches that of the mean of neighboring rural stations. Urban stations without nearby rural stations are dropped. This preserves local short-term variability without affecting long term trends. Originally, the classification of stations was based on population size near that station; the current analysis uses satellite-observed night lights to determine which stations are located in urban and peri-urban areas.

153
Do human activities contribute to climate change?
21
Are the 16 scientists who claim that climate change is not something to worry about climate scientists?
31
Does this graph show climate-change predictions don't meet observations?
21
Does unadjusted NASA climate data show no long-term global warming?
14
Whose account of the response to Michael Mann's original "hockey stick" analysis is correct?
210
Is this news article from 1912, essentially explaining climate change, real?
29
Did the US Climate Reference Network Show No New Warming Since 2005 in the US?
77
Do Milankovitch Cycles fully explain climate change?