Can humans have extra vertebrae without noticing them?

In an answer to How important is it that a person be able to touch their toes?, someone said that they found out they had an extra vertebra from their chiropractor.

I'm skeptical about their specific claim if it's based on an evidence-challenged medicine practitioner, but is it possible for a human to have extra vertebrae without noticing it?

Yes, and this is fairly common.

It's not an "extra" vertebra as such, but is actually nonfusion of a vertebra that is supposed to fuse. From wikianswers (I know, bad source, but it's a good summary):

The sacrum bone in the posterior pelvis comes from the fusing of 5 sacral vertebrae, which are numbered from superior (S1) to anterior (S5). The sacral bones fully fuse typically by around age 23, but sometimes the S1 vertebra does not fuse with the others. When this happens, it's called lumbarization. 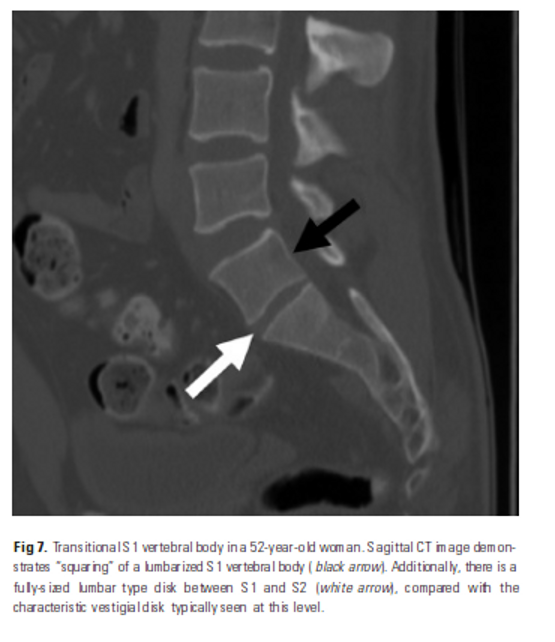 Image credit, the disc where the white arrow is pointing is more commonly not present.

There is no evidence to suggest this would make a person taller or affect their flexibility, and is probably not even associated with increased lower back pain. Pubmed (paywall) has a study from the Australian Spinal Association that studied around 500 spinal x-rays and found:

The prevalence of... lumbarization [was] 6.0%... There was no greater prevalence in patients suffering from low back pain when compared against those who did not... Contrary to previous claims that lumbarization is more common in men, we found a moderate predilection for this finding among women.

An Indian anatomical department did a study where they directly examined 332 dried sacra, and found:

Not the answer you're looking for? Browse other questions tagged biology physiology .

27
Can “breatharians” live without food or water?
23
Was Sir Arthur Conan Doyle responsible for the Piltdown Man hoax?
36
Can you get your legs stuck around a pole, leading to cramping and then death?
4
Can epilepsy be cured without any medication?
16
Can a person forget their own name?
9
Can humans functionally move their eyeballs independently of one another?
6
Can humans “feel” the earth's magnetic field?
15
Of all humans ever born, did most men not become fathers?