I came across the article Monsanto Is Scrambling To Bury This Breaking Story â€“ Donâ€™t Let This Go Unshared! claiming there was an unsafe level of glyphosate in a number of foods.

The key claim seems to be that 0.1 pbb is unsafe and larger amounts have been detected in a wide variety of foods:

Just to give you an idea of how outrageous these amounts are, independent research shows that probable harm to human health begins at really low levels of exposure â€“ at only 0.1 ppb of glyphosate. Many foods were found to have over 1,000 times this amount! Well above what regulators throughout the world consider â€śsafeâ€ť.

That quote references a report by FoodDemocracynow.org where they took the below graphic from:

Can these claims be verified? 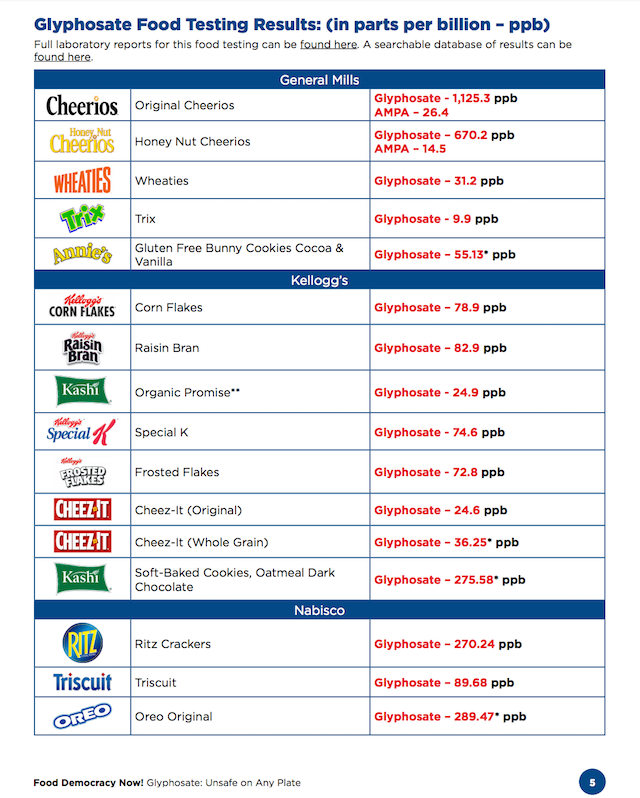 According to the document Joint FAO/WHO evaluation (2004 Part IIâ€”Toxicology) with information on the acceptable daily intake of glyphosate (ADI):

The acceptable daily intake for glyphosate is 0â€“0.3 mg/kg body weight. This was established based on no-observed-adverse-effect level (NOAEL) of 31 mg/kg bw per day.

That means that if you weighed 80 kg, it would be acceptable for you to consume 24 mg of glyphosate and the no-observed-adverse-effect level for you would be 2480 mg.

Now a person probably consumes about 80 g of Cheerios in a single sitting. At a concentration of 1125 ppb, that 80 g bowl would contain 0.09 mg of glyphosate.

There is no risk whatsoever that you will cross over the acceptable daily intake for glyphosate from consuming Cheerios.

The document goes on to discuss AMPA and states that:

In 1997, the Joint Meeting evaluated aminomethylphosphonic acid (AMPA), the major metabolite of glyphosate, and concluded that AMPA was of no greater toxicological concern than its parent compound. A group ADI of 0â€“0.3 mg/kg bw was established for AMPA alone or in combination with glyphosate.

An analysis by Snopes on this claim found it to contain a mixture of both truth and undetermined information.

What is true about this claim referring to Snopes is that studies performed on lab animals show glyphosate may be carcinogenic but FDA does not list glyphosate as a human carcinogen.

The bottom line is that there are plenty of studies suggesting potential harmful effects in humans based on animal studies. Some of these are more compelling than others, but ultimately there remains a disagreement on what levels would constitute harm to humans, and that disagreement has encompassed a wide range of scientists, activists, and the regulatory agencies of different nations at one time or another. Source: ConfoundUp

What is undetermined about this claim is that the test results published was not through research or peer reviewed analysis.

While there is no evidence to suggest the FDA shut down its residue program due to complaints from Monsanto, it is fair to question Monsantoâ€™s influence over that agency. Similarly, while there is also no explicit reason to doubt the results of the study presented by Food Democracy Now and the Detox Project, it does need to be acknowledged they too have an agenda. Source: ConfoundUp

Not the answer you're looking for? Browse other questions tagged united-states pesticides .

6
Do the Celestial Seasonings teas contain dangerously high pesticide levels?
56
Are American media controlled mostly by Jews?
11
Does Roundup (glyphosate) cause kidney disease in farmers?
8
Do glyphosate-based herbicides cause autism?
7
Does glyphosate herbicide break down into more toxic substances in the environment?
9
Is Melania Trump a Slovenian-American dual-citizen?
2
Were 48% of American billionaires Jewish in 2014?
12
Do American sanctuary cities breed crime?
3
Do half of Americans "live in areas that are deemed acoustically unsafe by [their] government"?
1
Does US American beer contain animal products?