Can "Seismic Blasting" from a ship induce massive earthquakes?

This YouTube video asks the question if the 2016 Kaikoura earthquake was caused by the ship the Amazon Warrior conducting "seismic blasting".

Is that even possible?

Green Party MP Steffan Browning posted on Facebook said it was off the coast of New Zealand the day before the earthquakes. 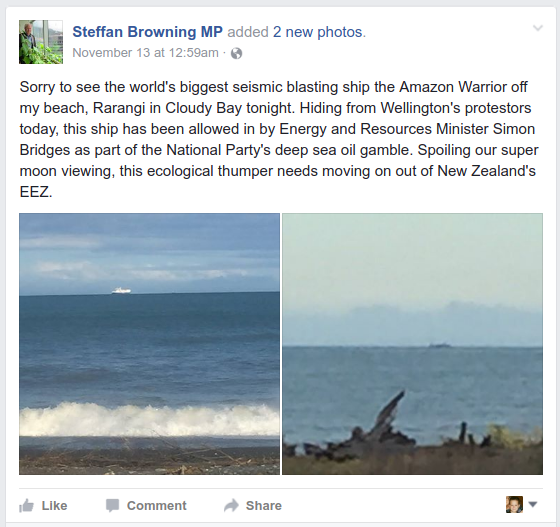 Sorry to see the world's biggest seismic blasting ship the Amazon Warrior off my beach, Rarangi in Cloudy Bay tonight. Hiding from Wellington's protestors today, this ship has been allowed in by Energy and Resources Minister Simon Bridges as part of the National Party's deep sea oil gamble. Spoiling our super moon viewing, this ecological thumper needs moving on out of New Zealand's EEZ.

Referring to GNS Science seismologist Dr John Ristau, the answer is no due to the following reasons.

However, the above reason provided by Dr. John Ristau is not backed up by research evidence as the distance to which the increased pressures can migrate and cause earthquakes and the timing is still uncertain.

The seismologists also found that earthquakes in this particular study could occur as much as 5-7 miles away from the well. The distance to which the increased pressures can migrate and cause earthquakes in other areas is still uncertain. Another uncertainty is timing between when the water is injected and when the earthquakes begin. Source: Induced Earthquakes Throughout the United States

But Ristau says the Warrior isn't to blame for Monday morning's quake. Firstly, the quake originated about 100 kilometres south of where the ship was stationed. There is also no way the blasts were deep enough - quakes originate well beneath the earth's surface. And the energy from the explosions or airguns wouldn't have had the power to cause a shake, he says. For context - South Island quarries constantly set off explosions bigger than those the ship would have used. Source: Why quakes weren't caused by seismic blasting or 'unzipping' faultline

Seismic signals produced by the air guns consist of bubbles of compressed air and these are not still researched or noted to induce earthquakes through artificial stress. An example of the bubble pulse produced by air guns can be viewed here.

Marine acquisition of seismic data is generally accomplished using large ships with one or multiple airgun arrays for sources. Airguns are deployed behind the seismic vessel and generate a seismic signal by focusing highly pressurized air into the water. Receivers are towed behind the ship in one or several long streamer(s) that are several kilometres in length. Marine receivers are composed of piezoelectric hydrophones, which respond to changes in water pressure.

2.2 The airgun source: The latest version of the airgun is the sleeve-gun which has the ability of producing a much more spherical bubble than the earlier generations of airguns. A single airgun produces a pulse of energy (or signature). Although the initial energy burst is reasonable, a complex pressure interaction between the air bubble and the water causes the bubble to oscillate as it floats towards the surface. This effect produces the extraneous bursts of energy following the initial burst. Source: Introduction to seismic processing and imaging

For more than four decades, seismic surveying and countless research projects (both in Australia and world-wide) have shown no evidence to suggest that sound from oil and gas exploration activities in normal operating circumstances has harmed marine species or marine ecological communities. Nor have studies found any significant disruption of marine animal behaviors that would affect survival or reproduction. Source: Seismic surveying

Coral damage was also not observed during seismic surveys.

One of the most comprehensive research studies carried out anywhere in the world was conducted by Woodside in 2007 in and around Scott Reef off the north-west of Australia. This extensive research was done by leading researchers from all over the world who studied the impacts of a seismic survey on marine life. They concluded that the survey caused: no significant, long-term impact on fish behaviour in either caged or wild fish, no hearing impacts (temporary or permanent) found in fish, no evidence of coral damage, no physiological damage to fish as a result of the seismic survey, no long-term effects on fish or coral populations and no observed physiological effects or mortality in other marine fauna. Source: Seismic surveying

Hydraulic fracturing, long-term wastewater injection, and enhanced oil recovery have all induced earthquakes in the United States and Canada in the past few years (Horton, 2012; Gan and Frohlich, 2013; Holland, 2013). As discussed above, wastewater disposal is responsible for the vast majority of the increase, including the largest and most-damaging induced earthquakes (Horton, 2012; Keranen et al., 2013; Frohlich et al., 2014; Rubinstein et al., 2014).. Source: Myths and Facts on Wastewater Injection, Hydraulic Fracturing, Enhanced Oil Recovery, and Induced Seismicity

Most injection wells do not cause felt earthquakes. More injection wells may be inducing earthquakes, but current studies are limited to the largest earthquakes and those with the best seismological and industrial data available. Further study of other earthquake sequences may reveal that additional felt earthquakes are induced. It is likely that smaller induced earthquakes are occurring and are too small to detect. In some sense, all hydraulic fracturing induces earthquakes, although typically microearthquakes. When production engineers hydraulically fracture, they are intentionally cracking the rock, causing microearthquakes that are typically smaller than M 0. Source: Myths and Facts on Wastewater Injection, Hydraulic Fracturing, Enhanced Oil Recovery, and Induced Seismicity

Fortunately the energy produced from seismic blasting is not powerful enough to cause quakes since the range of impulses fall between 1000 psi (Accelerated Weight Drop Thumpers) to 3000 psi (air gun).

TL;DR: There is no scientific evidence to support the claims that offshore seismic surveying causes earthquakes or triggers a fault.

Not the answer you're looking for? Browse other questions tagged geology .