What is the real history behind of the Ford GAA engine?

I have been searching for quite some time trying to find out if what I have heard is true with the history of how the Ford GAA engine came to be.

(Note: this site has some errors, such as its reference to the GAA replacing the Chrysler A57 Multibank and an incorrect power output for the A57)

The history as I currently understand it is:

Edsel Ford had set up a tentative agreement with Rolls Royce to build Merlin V12s in Ford factories. The deal stated Ford had to sell the engines to the countries Rolls wanted them to and the engines had to be built to Rolls specs. The deal was scrapped after Henry Ford refused to sell to anyone but the US and wanted to change the design of the engine.

Henry Ford was too confident and pressed forward with designing and purchasing the materials, tools, and molds needed to produce their own V12 aero engine. They went to the navy and were turned down due to them wanting radial engines. The Army turned them down since they had allison engines and did not want to retool and retrain.

Henry Ford got lucky and the army came back asking for a tank engine for the Sherman.

Therefore the army went to Ford and in effect said, "Look, we don't need another aircraft V12, but we do need a good tank V8." Ford then took the casting cores for the V12, chopped off the rear 4 cylinders, and the GAA V8 was born. To facilitate a quick production startup on the engine, it was decided to keep the existing design, which meant that the engine stayed as a 60-degree V-engine, and because all the design, engineering and coring was for alumunum, this feature was kept as well. Thus we have the Ford GAA, an "accidental" engine of the finest magnitude, likely the biggest light alloy, water cooled V8 engine ever built. 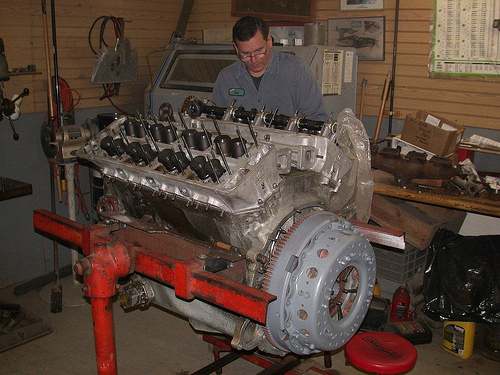 On 28 May 1940 Henry Ford claimed "Ford Motor Company could ... swing into the production one thousand planes a day". (The Public Image of Henry Ford at page 270).

By August 1940 Ford, with reluctance due to preference for their own engines, started producing Pratt & Witney 18 cylinder air cooled engines for B-26 (ibid, 273-274)

According to M4 Sherman: Rare Photographs from Wartime Archives pages 15-16:

...Ford GAA-III V8 petrol engine, effectively a modified version of a V12 engine that Ford had originally developed for use in aircraft. The GAA-III engine had already been trialled in the M3E1 tank before being authorised for use in the Sherman in January 1942.

The three pilot models, each using a slightly different variation of the engine, were shipped to the General Motors Proving Ground trials in late May 1942. Early results suggested that the engine was not sufficiently reliable, there were structural weaknesses in the crankcase, as well as in the crankshaft itself, and the engine had a propensity for burning exhaust valves as well as an appetite for head gaskets. It wasn't until June 1943 that Aberdeen Proving Ground was able to report that not only was the engine considered to be 'very satisfactory' for medium tanks, but that it was also more easily maintained and serviced than the other engines

The reference goes on to explain that Ford produced 1690 M4A3 tanks, then stopped producing the M4A3, but continued producing the GAA-III engine for other manufactures of the M4A3.

It will be recalled that in June 1940 Henry Ford had begun to develop a liquid-cooled motor for his hypothetical 1000-a-day pursuit plane, and that after the plane was abandoned he had continued to develop the engine, confident that one day it would be used by some type of American airplanes. He had invested about $2,000,000 in the project, and by July 1941 had a motor practically ready for use. The basic design was evolved by an engineer named Cornelius Van Ranst. Sheldrick called him "a dreamer of the first rank, and a clever, clever designer," but thought that he lacked the toughness to stick with a design to the finish. Others had a better opinion of Van Ranst. And in this instance he had produced a brilliant design with a cylinder block and crankcase in one aluminum unit. The result was lightness combined with strength. A novel valve system helped to make the engine outstanding. The discussion of tanks, with its overtone of worry about power, now in mid-July of 1941 turned attention anew to Van Ranst's engine. Edsel Ford and Sorensen discussed the possibility of using it for the M-4, called in the engineers, and decided, says Sheldrick, "that by taking eight cylinders of the twelve-cylinder aircraft engine ... we could make an excellent tank engine." Van Ranst was told to plan an 8-cylinder adaptation. A week later, on July 22, Sheldrick had business in Washington, and took along some drawings of the proposed model. At dinner he showed them to Major Emerson Cummings of Army Ordnance. Cummings was immediately interested, and Sheldrick went back to report. No contract was drawn. "We were feeling quite patriotic about that time and we just started working on it on our own." Sorensen summoned the engineers, set a date, and snapped: "All right. Get busy and don't drag the seats of your pants. Tanks are being built and the Government has no engine for them."ss While this work went forward, the company was asked how quickly it could begin tank production. Edsel, Sorensen, Wibel, and Sheldrick went to Washington, and on September 17 inspected a model of the M-4. The design was not final, and automotive firms were asked to make suggestions. Sheldrick objected forcibly to the final drive housing in the front of the tank. He convinced Army officials that his position was sound, was told to redesign that unit, and had a new nose prepared by Ford engineers which was accepted October 20. Meanwhile, on September 19, the government had asked for a sample of the new Ford engine, and on October 10 the company agreed to manufacture the M-4. It proposed on October 23 that negotiations cover armor castings, armor plates, and a tank assembly plant costing $45,190,000. The Rouge steel technicians had developed a method for manufacturing armor with water-cooled dies. These prevented warpage (which had attended manufacture by water cooled sprays), and cut the time involved from two hours to less than eight minutes. On December 9 the government guaranteed adequate advances to build facilities for the production of 400 tanks a month. The M-4 thus became a Ford design in part as to body, and wholly as to engine; for the GAA-V-8, as Van Ranst's model was called, soon became the standard power unit for all medium tanks

American entry into the war had also found the tank program short of the production stage, though preparations were well along. Facilities for manufacture had been developed at Highland Park (314,144 sq. ft.) and the Rouge (189,200 sq. ft.) an aluminum foundry at the Lincoln plant and an armor plate building at the Rouge (finished July 12, 1942) being vital to the project. Production followed rapidly. On April 25 the first GAA engine was completed, a tank model was ready May 13, tests were successful, and on June 4 the first tank rolled off the assembly line, two months in advance of schedule. The Ford Motor Company made only 1683 M-4 tanks and 1035 M-10 tank destroyers, a second vehicle which it agreed to produce in the final contract of May 5, 1942. A number of reasons combined to cause a cancellation of its contracts. The government seems to have felt that Fisher Body and Chrysler could adequately manage the supply of medium tanks, and the Ford commitments with respect to both aircraft engines and bombers produced a shortage of workers which seemed to warrant reduction of the overall program in some important respect. Fisher by early 1945 had produced 16,000 tanks and tank destroyers and Chrysler 20,000, indicating their ample capacity. Ford, however, continued to supply two vital elements, armor plate and engines, for the M-4s. All told, it manufactured 26,954 engines for the regular tank-makers,14 on a model that was a distinctive contribution to the war program, justifying the foresight and persistence of Henry Ford. Because he had developed it at his own expense for a year and a half, Army Ordnance had a superior engine available at a time of critical need early in 1942.

So not only is the OP statement that the army told Ford they "need a good tank V8" false, according to M4 Sherman at War Captain Charles B. Kelly of the 2nd Division actually filed a wartime report saying "if you'd add two more cylinders you'd have an engine".

Not the answer you're looking for? Browse other questions tagged history road-vehicles world-war-ii .

14
Can you improve a car's engine by driving the car fast?
31
Is running the engine for five minutes before driving beneficial for the car?
8
Is the "Necronomicon" book historically real?
23
Do historians agree the motive behind Catholic celibacy was primarily economic?
53
Was the Ford Model T black because of the speed black paint dries?
10
Is the Kabul evacuation "the largest airlift of people in history"?