Photo from this page: http://www.rmf.fm/magazyn/news,6902,wiekszosc-polakow-podziwialo-wczoraj-ksiezyc-zobaczcie-piekne-zdjecia.html

It's on a reputable site which claims that it is a genuine photo but I can't believe that the moon really appeared so large. 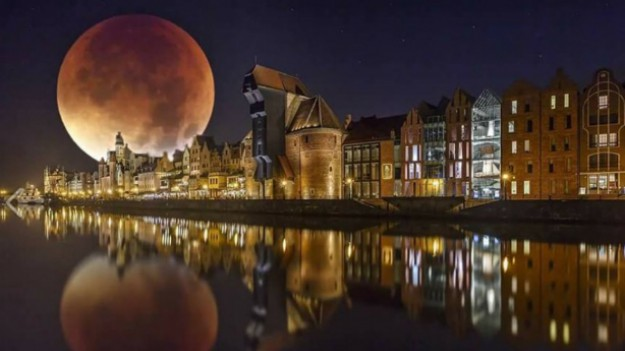 About this first element of your question

Is this a photo of the supermoon over Gdańsk?

We can easily answer with a clear NO, as the photo has been published before: http://trojmiasto.eska.pl/poznaj-miasto/trojmiasto-noca-a-gdyby-gdansk-wygladal-wlasnie-tak/50001 http://fotolajt.flog.pl/wpis/10794593/wieczorne-nabrzeze-motlawy-w-blasku-zacmienia-ksiezyca#w

from the automatic translation of the linked pages, it seems to be an image linked to a lunar eclipse ("blood moon"), and also the colors of the moon in the picture would indicate that.

Is this a genuine photo?

I don't speak Polish and google translate is not helping much, but the above pages does not seem to clarify this point in either way.

The blog related to the second link has reposted the photo on facebook in the last 24h, and many of the comments seem to agree that it is not genuine, but I cannot find any hard proof as of yet

As already stated by Frederico et. al. it's not the supermoon over Gdansk because the picture was already posted earlier.

It's neither genuine because the line of sight (feel free to enable the 3d vision) in the pic is almost NNE to SSW and the moon never stands that low over Gdańsk looking in this direction - at least in the "summer three quarter".

Additionally the relation between Moon size and the buildings (and star constellation) don't fit and Moon's surface structures should be much sharper.

The Krantor (the strange overhanging building in the middle of the picture) has a height of ~31m (sorry, no english Wikipedia link found). The distance between the photographer (somewhere in the violet circle but almost at the same level as the opposite quay and ~2.5 m above sea level) and the Krantor is about 90 m (using Google): 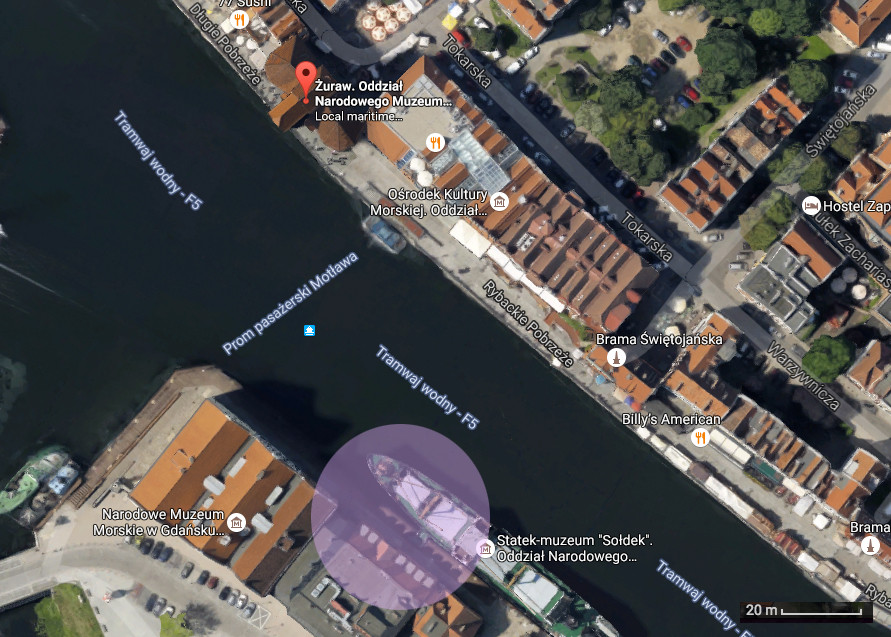 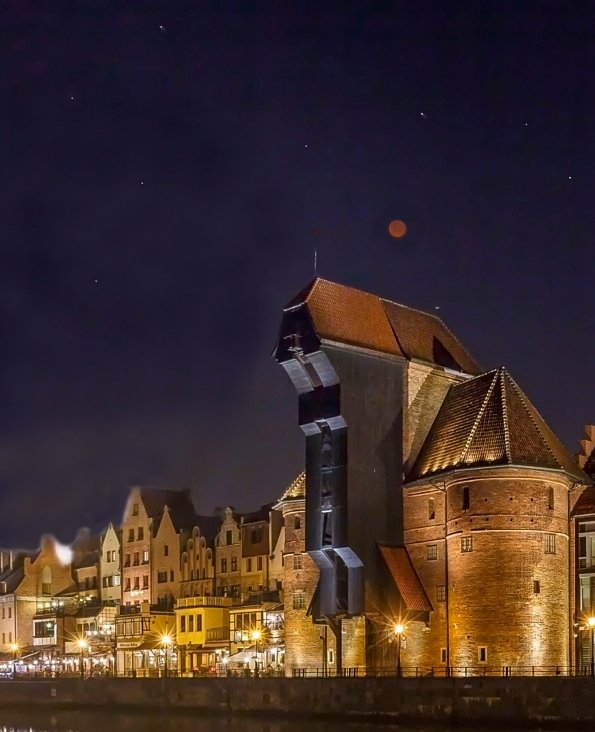 No, the photographer claims it is a photo of an eclipse over Gdansk

It is almost certainly a composite image. The photographer's website has several photos of different places in Gdansk containing the same image of the moon. 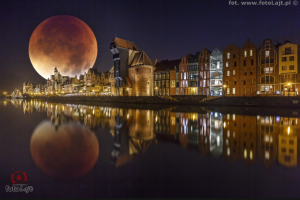 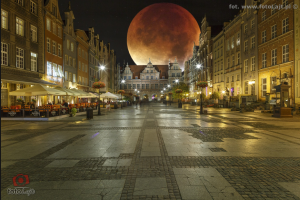 The link in the question shows the image credited to fotojajt

The photographer at www.fotolajt.pl calls themselves Pawel and is based in Gdansk, Poland. The photo is in a blog entry dated 30 January 2016 where it states "eclipse on 28 September 2015." (presumably when the photos were actually taken)

Another photo in the same website uses the same moon image, strongly suggesting it is a composite. In the time taken to travel around Gdansk the real moon would almost certainly have changed lighting during an eclipse in the time a solo photographer would have taken to pack away camera gear relocate and set up again.

Another image showing the same building from further along the harbour includes a moon that appears to be somewhere around a tenth of the size. EXIF info says that this other image was captured by a Nikon D610 35mm full-frame DSLR using a 50mm focal-length lens.

The apparent size of the moon at syzergy-perihelion (supermoon) is only 14% larger than at aphelion, and the surrounding buildings at this location constrain the use of longer telephoto lenses to distort the scale from a viewpoint close to the water level.

here's a comparison with a more realistic photo at the same location. We can see the difference in size is more than 14%, even taking into account likely differences in focal length and viewpoint. 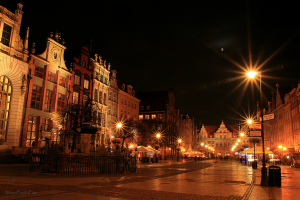 Other photos of the supermoon published in polish websites (example) in 2016 seem to show a more normal colouration and a very different (but consistent) orientation. Suggesting that the moon in the image in the question is not taken in Poland in mid November 2016. 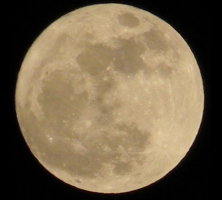 The image of the moon is strikingly similar to an Alamy stock Photo taken in Westphalia Germany on September 28 2015.

It is also similar to one taken of a blood moon (total eclipse) by Karen Bleier in Virginia in 2010. 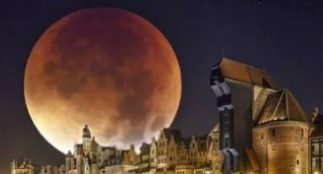 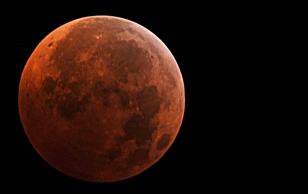 This supports the conclusion that the moon in the photo was photographed during an eclipse, not during the November 2016 "supermoon" period.

It seems likely that the image of the moon seen in the presumed composite was taken during an eclipse in 2015.

It seems unlikely to have had the same colouration if photographed when there was no eclipse to cause the tint.

30
Is the Moon young?
19
Is the climber's head-lamp backstory for this long-exposure photo feasible?
117
Is this picture showing an eagle flying upside-down genuine?
10
Do Qur'an verse counts correspond to the moon landing date and take-off time from the surface of moon?
23
Is this a declassified photo?
2
Is this picture of a man in Colorado Springs nearly being blown away, genuine, or a hoax?
82
Is this photo of a road detouring around a tree authentic?