Was the golden ratio deliberately used for aesthetics in ancient or Renaissance times?

There is no strong evidence for this, and plenty of evidence that ancient and Renaissance artists used other systems — for example, ratios of integers. That is, it is not as if we have lost all writing from classical times on ideal numerical systems for art and architecture, but this idea does not appear. Therefore, it is likely that those systems were used by artists and architects, and the golden ratio was not, until its modern popularization.

Knowledge of the ratio dates back to at least Euclid (300 BC), but he just noted it as interesting in mathematics, not aesthetics. Then, it doesn't seem to really turn up in writing until about 1500, when Italian mathematician Luca Pacioli wrote about it as "the divine proportion" — and while his mystical writing touches on aesthetics, there's no evidence that anyone (even da Vinci!) took it to heart.

The idea that the number was important in aesthetics comes from a psychologist named Adolph Zeising in 19th century Germany. There is credible evidence that this is the start of the modern idea. Zeising's theory — that there was a number behind beauty — matched the times, as scientists worked to turn psychology into a quantifiable empirical science (see more in the article Architecture and the Golden Section), and perhaps this helped the idea spread.

But, just because Zeising popularized the idea doesn't mean he's wrong. However, I'm coming up empty coming up with anything credible before the 19th century — which suggests that if he's right about any aesthetic qualities (a separate question, really), he was wrong about its actual use by prior artists (just as he was wrong about its frequency in nature).

The Zeising approach of finding some ancient thing which appears to fit the measurements is not satisfactory, for two reasons: first, this is subject to selection bias — it stands to reason that if we measure all of the things, some will appear to fit by coincidence. Second, it is usually the case that such measurements are done very shoddily in order to make them match. The images Sklivvz has provided in another answer are perfect examples of this: sure, there are convincing-looking lines and measurements at first glance, but if you look more closely, it's unclear what exactly they line up with. The rectangle around the Parthenon doesn't even line up with the borders of building in the diagram very well — and in fact in reality, only comes close if you start at the second of four steps. In short, the idea that the Parthenon corresponds in this way has been well debunked.

Most ancient writing on proportions in design seems to follow a system of ratios of integers — for example Vitruvius, on who's work da Vinci's famous illustration is based. This is the case with the Parthenon:

In all, this 4 – 6 – 9 theme pervades the entire Parthenon: in the symmetry of the architectural elements it leads to the geometric proportion 4:6 = 6:9. In the sculptural program of the temple's east front it constitutes the core of the 4 – (6 - 7) – 9 symmetric number symbolism.

(Emphasis added to highlight the numbers.)

This text — not the golden ratio! — is the inspiration for da Vinci's Vitruvian man. Now, the actual influence of Vitruvius on architecture before the Italian Renaissance is itself in doubt, but an example of an intended-to-be-comprehensive ancient survey of practices in architecture, and it's all about the integer proportions. The golden ratio isn't mentioned.

If we move forward to the Renaissance, the most common example cited is Luca Pacioli's Divine Proportion. But, only the first part of this book is concerned with the golden ratio, and is primarily about the relationship between religion and math — the word "divine" here is intended to be literal. Pacioli's writing is deeply mystical, and connected with ideas about an indivisible God, the trinity, and so on (see this for more). He does discuss Platonic solids and more complex derivatives and their relation to architecture, but the connection from that to direct use of the golden ratio as a design principle just isn't there.

The second part of Pacioli's book covers architecture, and discusses the integer-based Vitruvian system as applied there — not the golden ratio! Furthermore, despite da Vinci's illustrations, Pacioli was not an artist, and I see no contemporary evidence that his ideas caught on (in art or otherwise) until Zeising. Da Vinci made extensive notes and sketches for his own work, and none of these make reference to the golden ratio — but there are examples of other proportions. The idea that he believed in this theory but left it out is an extraordinary claim with no support.

There is, however, significant counter-evidence in a 1876 study by Gustav Fechner — a strong believer in Zeising's ideas. He surveyed 10,558 paintings from from 22 European art galleries and analyzed their aspect ratios. Expecting to find the golden ratio, he instead found a general disregard for it: 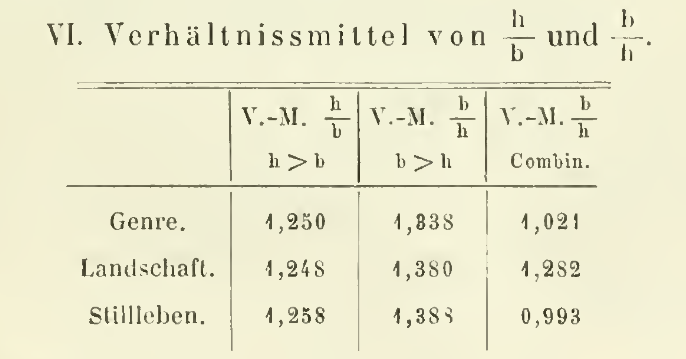 Of the three types of paintings analyzed, those in "portrait" orientation have an average aspect ratio of about 1:1.25 (that is, 4:5) and those in "landscape" orientation average about 1:1.37 — which is close to 3:4 but nowhere near phi. Of course, in such a large sample, one can surely find some examples which approach the golden ratio, but were it in any way special to the artists of the time, one would expect at least a pattern of use — and there isn't one.

For more analysis comprehensive paper on some "conventional wisdom" examples which do not hold up, see George Markowski's paper Misconceptions about the Golden Ratio, which covers the Great Pyramid, the Parthenon, da Vinci, This paper itself contains many further references if you're unconvinced.

Ancient (Pythagoras, Vitruvius) and Renaissance (Pacioli) authors wrote about the beauty, importance, and mysticism of small integer ratios, and this is matches various very precise measurements of surviving structures. That is, the writings match the apparent result. To the contrary, there seem to be no ancient writings espousing the use of the golden ratio in art or architecture, and few if any examples of precise measurement of artifacts.

I think that a lot of the claims are quite believable.

Let's start with this tidbit I found (source below)

In the world of mathematics, the numeric value is called "phi", named for the Greek sculptor Phidias.

The measurements of the Parthenon are quite objectively due to phi. As you can notice in the image below, all major measurements are strictly related to the golden ratio.

There are many university, or otherwise reputable sites corroborating this:

It has always been a problem to undertand how the Greek architect and his consruction workers managed to incorporate into the design of large-scale temples like the Parthenon the "irrational" measurements which the Golden Mean requires. The Greeks had no system for handling irrational numbers in a theoretical manner, let alone applying irrational measurements to an actual conctruction project. Extending the numbers of the GM proportion from one place to another on a building in the process of construction would seem to have been impossible.

But the proportions are clearly there in fact.

Throughout history, the ratio for length to width of rectangles of 1.61803 39887 49894 84820 has been considered the most pleasing to the eye. This ratio was named the golden ratio by the Greeks. In the world of mathematics, the numeric value is called "phi", named for the Greek sculptor Phidias. The space between the collumns form golden rectangles. There are golden rectangles throughout this structure which is found in Athens, Greece.

I find way more believable that the Greek would have used some symmetrically pleasing geometric construction, such as phi, to design the Parthenon, than assuming it's a mere coincidence. The figures match to within 5%.

Regarding the Renaissance, the artists that extensively used the golden section during the Reinassance are:

There are skeptics -- like George Markowski -- which seem to dismiss the claim based on believability. I personally don't find his argument compelling: it's based on the fact that phi is close to 5/8ths, and the measurements are not accurate enough. On the other hand, since phi is irrational, one can always claim that any work is not close enough, because the precision "required" to sustain or dismiss this claim seems to be set arbitrarily by the author.

In any case, I've only scratched the surface of examples: there's a Wikipedia page dedicated to listing all the works of art which use the Golden Ratio which gives around 12 examples, and many more can be found in art history books.

"Misconceptions about the Golden Ratio"

The golden ratio, also called by different authors the golden section [Cox], golden number [Fi4], golden mean [Lin], divine proportion [Hun], and division in extreme and mean ratios [Smi], has captured the popular imagination and is discussed in many books and articles. Generally, its mathematical properties are correctly stated, but much of what is presented about it in art, architecture, literature, and esthetics is false or seriously misleading. Unfortunately, these statements about the golden ratio have achieved the status of common knowledge and are widely repeated. Even current high school geometry textbooks such as [Ser] make many incorrect statements about the golden ratio.

So I guess we have to look at Markowsky's references.

Not the answer you're looking for? Browse other questions tagged history art .

1
Is golden ratio the most aesthetically pleasing ratio?

18
Were "Ancient Astronauts" or extra-terrestrials responsible for the construction of Stonehenge?
19
Was torture and execution commonly used by the Spanish Inqusition?
42
Were metered taxis busy roaming Imperial Rome?
8
Was the penal system used to colonise Australia?
4
Was SS Californian intended to be a rescue vehicle for the passengers of a deliberately-sunk Titanic?
4
Was Isaac Newton responsible for the loss of Robert Hooke's work?
11
Was the ancient Indian city of Mohenjo-daro destroyed by a nuclear weapon?
32
Was the Stroop Effect used to catch spies?