It's not difficult to find image memes indicating that Mike Pence, our future vice-president for 2017-2020, advocates gay conversion therapy paid for by the government. 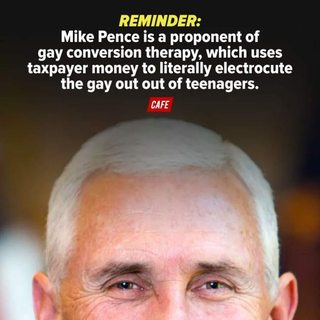 Did he actually make that statement, or one reasonably interpreted as such? The source of the statement seems to be come down to an amendment to the Ryan White Care Act:

Congress should support the reauthorization of the Ryan White Care Act only after completion of an audit to ensure that federal dollars were no longer being given to organizations that celebrate and encourage the types of behaviors that facilitate the spreading of the HIV virus. Resources should be directed toward those institutions which provide assistance to those seeking to change their sexual behavior.

California Lt. Gov. Gavin Newsom says that Pence "advocated for diverting taxpayer dollars to so-called conversion therapy." and Politifact rated that statement as true based on the text of the Ryan White Care Act. Snopes, on the other hand, rated it as "Mixture", saying that the text did not support the assertion.

Is there a quote from Mike Pence stating that he is in favor of conversion therapy for homosexuals?

The true meaning can be ascertained from Pence's 2 February 2008 speech at Ball State University, Muncie, IN.

Currently within PEPFAR [President's Emergency Plan for AIDS Relief], these pivotal provisions exist in forms such as the ABC Model, which stands for Abstinence, Be faithful, and Consistent and Correct Condom use. It is absolutely essential that we preserve these prevention methods that focus on behavioral change. Working with faith-based and non-governmental organizations on the local level, in particular through the ABC Model, has produced undeniable results.

It is not enough to send billions of dollars to Africa without sending values-based techniques that work to fight the spread of HIV/AIDS by changing behavior.

Last week when the President called for continued support for this very important initiative in his final State of the Union address, he insisted that Congress must "maintain the principles that have changed behavior and made this program successful." The current draft of this reauthorization is no longer the program envisioned by the President and embraced by Congress. Under the new bill, PEPFAR would no longer be a program focused solely on prevention and treatment of HIV/AIDS. Instead, it would be converted to a program that, with increased funding, could take lives through abortion rather than save lives through prevention and medication. PEPFAR is a successful program that is under attack.

...We cannot send billions of dollars to Africa without sending values-based safeguards and techniques that work to fight the spread of HIV/AIDS by changing behavior.

Within the current version the Global AIDS bill that the Senate recently passed, these pivotal provisions exist in the form of a requirement to provide balanced funding for prevention activities for sexual transmission of HIV/AIDS,'and to ensure that abstinence and faithfulness programs are implemented and funded in a meaningful and equitable way.' This is enforced by requiring the Global AIDS Coordinator to report to the appropriate Congressional committee if funding for abstinence, delay of sexual debut, monogamy, or fidelity programs drops bellow [sic] 50 percent of the total sexual prevention program funding.

It was essential that we preserve these prevention methods that focus on behavioral change, and that we work with faith-based and non-governmental organizations at the local level, in particular through the ABC Model, which has produced undeniable results. ...

For more information on the ABC model see Abstinence, be faithful, use a condom

Not the answer you're looking for? Browse other questions tagged politics sexuality .

15
Did fake news on Facebook influence US elections in 2016?

12
Did Bill Ayers ghost-write for Obama?
20
Did Obama have a marine demoted for correcting him?
8
Does Conversion Therapy cause harm?
29
Did Google censor autosuggest results for Hillary Clinton?
4
Did the Hague Tribunal exonerate Slobodan Milošević for Bosnia War Crimes
9
Did White House staff have problems booking a hotel for Trump for G20?
3
Did Rote Antifa post an image of a "Will trade racists for rapists" sign?
58
Did the Indonesian army have a virginity test for female recruits?