Is this photo depicting Dalits from India genuine?

Wake up INDIA! This is 21st century, not 14th! YOU are not better than ISIS until standing for this Dalit family! 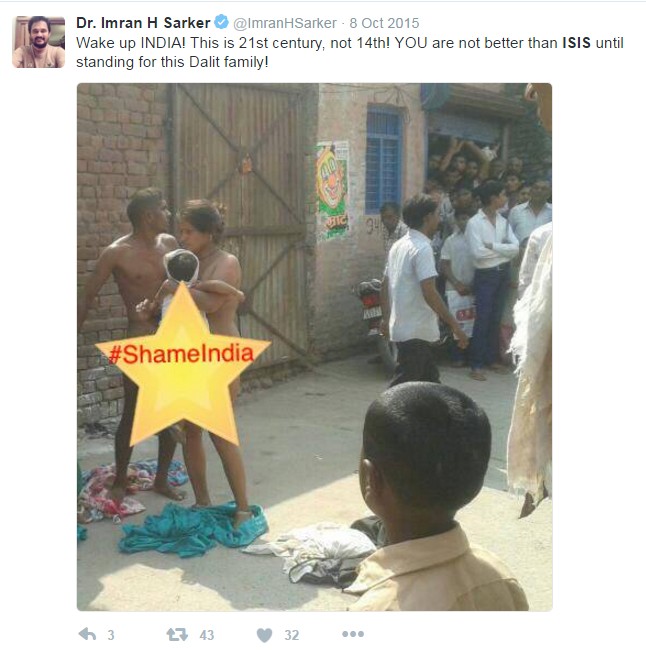 Yes, it's genuine as proven by the video in the DNAIndia post Police allegedly strip Dalit family naked in UP for filing complaint.

Police in Greater Noida's Gautam Buddh Nagar allegedly stripped a Dalit family naked for attempting to file a complaint. Subsequently, a video of the incident has gone viral on social media.

According to The Hindu, Sunil Gautam and his wife were stripped naked publicly by the Dankaur police after they insisted on filing a police complaint. They were later arrested and locked up in jail.

The video above seems to be inconclusive and incomplete. It is unclear whether the family was stripped or themselves disrobed. Nevertheless, the inordinate reaction of the police and public can be seen clearly. Indeed, one woman is being dragged along the crowd and also gets stripped in the melee. A child also seems to have been stripped of his clothes.

8
When is the origin of Datura in India?
32
Are "Hitler" brand ice cream cones sold in India?
9
Is eating food with your bare hands more tasty?
23
Is this a declassified photo?
9
Is this a genuine photo of the supermoon over Gdańsk?
9
Did India shoot down any Pakistani F-16 on 27th February 2019?
40
Were the women of Travancore, India, taxed for covering their breasts by breast size?