Has Hillary Clinton been a Cubs and a Yankees fan for years? 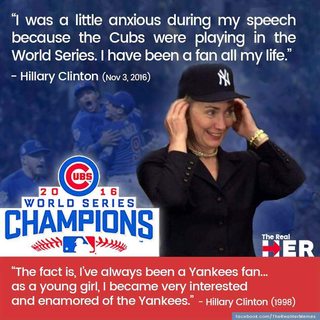 According to this image circling the Internet, Clinton is on record this week saying that she is a life long Cubs fan. Yet her previous statements claim she's been a Yankee fan for years.

Did she claim to be fan of both teams?

Yes, Clinton has self-admittedly been a fan of both clubs for years.

We can see from her opponents' view on the issues (obviously painted with a negative slant) that Hillary Clinton has claimed to be a long-time fan of both the Cubs and Yankees.

GOP.com (the website of the Republican Party, Clinton's opponent in the elections) claims that (emphasis mine):

In the early 1990s, Clinton pledged allegiance to the Cubs, claiming she’d been a lifelong fan in an interview with Esquire. But running for the Senate in New York, Clinton claimed she’d “always been a Yankees fan.”

In 2006 Clinton Said The Cubs And Yankees Were Her Favorite Teams “Growing Up And Now In My More Mature Years.”

CLINTON: “Thank you very, very much, Jonathan. I don't have time to rebut everything you've said in your introduction. But I cannot let stand that I have ever, ever been a Mets fan. Have to set the record straight. Cubs and Yankees: Those were my teams, and remain my teams, growing up and now in my more mature years.” (Hillary Clinton, Remarks, Washington, DC, 5/23/06)

While Running For Senate, Clinton Said That “She'd ‘Always Been A Yankees Fan.’”

“Later, Clinton asserted that she'd 'always been a Yankees fan.' Couric correctly challenged her, saying she thought the first lady, a native of Illinois, was a Chicago Cubs fan. 'I am a Cubs fan,' Clinton said. 'But I needed an American League team … so as a young girl, I became very interested and enamored of the Yankees.’”

Clinton has claimed consistently to be a fan of the Yankees since 1999, therefore she is qualified to claim that she has been a Yankees fan for years (although her support before 1999 is doubtful).

She has also consistently claimed that she had always been a Cubs fan while growing up, and that she chose to support the Yankees as well because the Cubs were not winning enough.

Not the answer you're looking for? Browse other questions tagged sport hillary-clinton .