The ultimate goal of adding a lemon to a beer is to hide beer flaws and defects.

Some Tijuana bars started to adding a lemon to cover these defects and marketing ended up making a famous brand (C****a) popular to be used with lemon.

So you should avoid beers that need lemons to taste good.

*Translated from this pic in Spanish.

Besides the source of information does not seem to be very reliable, most beers come in dark bottles, so may be there is something true about it? 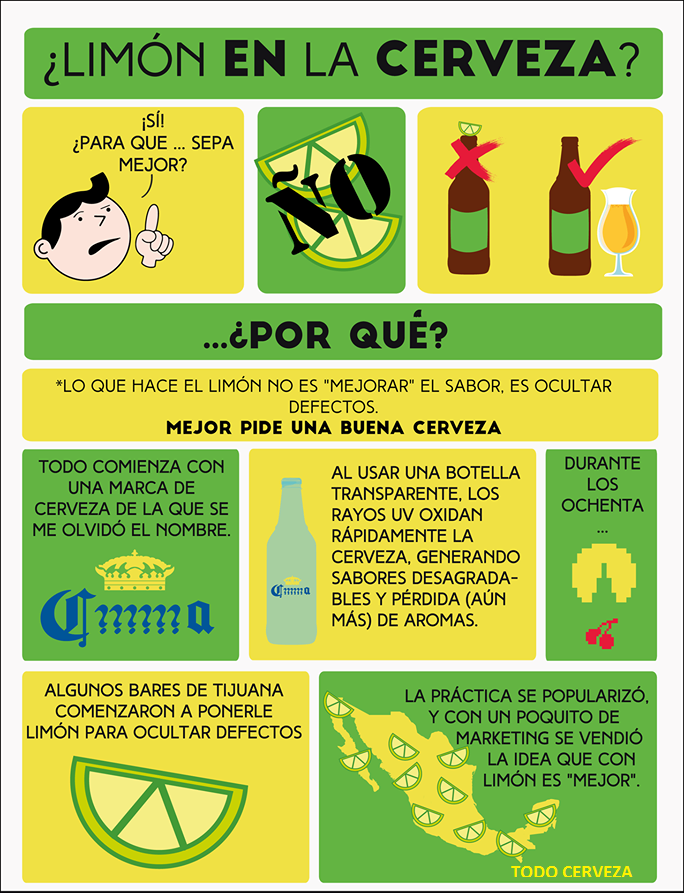 The bittering agent generated from hops while boiling beer wort is a compound called isohumulone. Ultraviolet light can degrade isohumulone all by itself. But it turns out that visible light can also induce isohumulone degradation -- it just needs a helper molecule, in the form of riboflavin. Once the proverbial ball starts rolling (or, in this case, the electrons start hopping), a series of reactions take place that eventually produce the compound 3-methylbut-2-ene-1-thiol. That mouthful, known colloquially as 3-MBT, is your skunk. In fact, 3-MBT is chemically very similar to one of the three main compounds found in a skunk's defense spray. Source: BEERSCI: WHY YOU SHOULD NEVER DRINK BEER FROM A CLEAR GLASS BOTTLE

Brewers started to use glass because it kept beer fresher, longer. However, there was one serious issue, if the beer was left in the sun too long, brewers found the beer would smell and taste skunky. Literally, it smelled just how a skunk smells. Scientists discovered that Ultra Violet rays from the sun break down the alpha acids in hops which then react with the sulfur present in beer to form a chemical that is almost identical to the chemical that skunks use to spray predators. Those damn UV rays. The solution was to tint the beer bottle to protect it from UV rays. Similar to how sunglasses help protect your eyesight; the dark brown beer bottle helps protect the beer from going bad. Source: Berghoff Beer Blog

Amber bottles block much of the wavelengths of light (~300-500nm) that lead to this photoxidation but green and clear bottles do not. Corona IS skunky … this is why they serve it often with a lime to mask the smell. Also, the ‘skunkiness’ has become accepted in Corona as just part of the flavor. Some of the macrobrew companies (Miller-Coors etc) use a hop extract that has been stabilized so that light will not lead to MBT production. Therefore they can use clear bottles without worry. Since the MBT is derived from hop components, different beers with different amounts or types of hops may lead to varying levels of light induced MBT. Source: Physics and Green Beer Bottles.

Around World War II, brown glass rose in demand and many companies had to forfeit their brown glass for their country. Unfortunately that meant companies with higher quality beers had to use clear glass, which made their beers look like cheaper, clear glass beers. Higher quality brewers’ solution was to sell their beer in green bottles so a consumer could tell the difference between a regular beer and a higher quality. The green beer bottle became a status symbol for many European breweries. These days, there’s not much of a reason to sell a beer in a green bottle other than for marketing and aesthetic. Many companies use it to distinguish their beer from others. Of course, some beers have used green bottles for so long, it would seem silly to switch to a brown glass now. Source: Berghoff Beer Blog

TL;DR: Modern glass suppliers are able to apply clear, UV protected coating to glass that stores fresh beer no matter what kind of colored bottle it is in.

After significant investigation as to why beer kept in glass bottles spoiled so quickly, scientific research produced evidence that ultra-violet rays from the sun were responsible for damaging the acids found in the hops. As for the clear glass bottles, thanks to modern technology today’s clear glass can be coated with a UV protectant to ensure beer stays just as fresh. Source: WHY ARE BEER BOTTLES BROWN? THE ANSWER MIGHT SURPRISE YOU

Not the answer you're looking for? Browse other questions tagged chemistry beer taste .

15
Oils from your face will make the foam from beer subside faster?
20
Does beer kill brain cells?
14
Is a "beer belly" caused by drinking beer?
6
Was beer the most popular drink for breakfast before coffee became popular?
15
Does canned beer taste better than bottled beer?
2
Is beer safe after a nuclear event
3
Does the hops in beer cause sleepiness?
9
Does Coca Cola taste different in glass bottles?
44
Does wetting a beer glass change the foam characteristics?
1
Does US American beer contain animal products?