Are the voting figures correct in this image about historical US decisions by party?

The following image promotes the Republican party over the Democratic party by looking at the support for some historical decisions.

Are the figures presented correct? 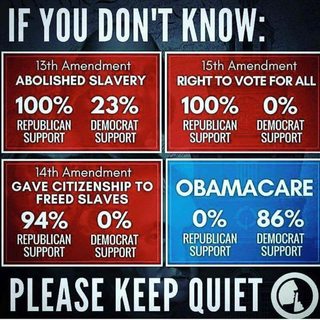 Some of the text on this infographic is correct but some is false. A mixed bag.

I didn't verify every claim on the infographic, just the claims I found interesting or were not going to be time prohibitive for me to verify. Party affiliation was checked using Wikipedia and then I checked the Library of Congress' record for the Senator or Representative when their verification was absolutely needed.

Voting results for all of Congress:

The claim seems to be true for Republican support. No Republicans voted against passing the 13th Amendment in all of Congress.

The percentage for Republican support is true at least for support in the Senate, I spot check the House and found at least one Republican that voted against the motion in addition.

The claim is not true for Republicans support in the Senate. There were at least five Republicans that voted against the motion. One such Republican is James Dixon of Connecticut.

In the Senate, Saulsbury(D) of Delaware was marked as absent, not sure if this mean physically missing or abstained from voting. 0% support is possible.

As many have pointed out the Democrats and Republicans of any given time period are going to be of their time and culture. Culture changes and politics is very much a beast of culture, it is not surprising that party platforms change over time.

There is a reason why terms like Southern Democrat and Dixiecrat existed. (If any knows any Republican analogs please comment, I cannot think of any offhand.)

The data are not quantitatively correct.

It is not true that there was 100% Republican support for the 15th amendment.

According to the names as listed in the 1869 Congressional Globe, Republicans who voted against the 15th amendment in the Senate were:

James Rood Doolittle, WI (Wikipedia adds, citing to an 1891 reference, that "He strongly opposed the Fifteenth Amendment to the United States Constitution on the ground that each state should determine questions of suffrage for itself" and later became a Democrat)

According to the names as listed in the 1869 Congressional Globe, Republicans who voted against the 15th amendment in the House of Representatives were:

Also Samuel Fenton Cary, OH was "Independent Republican" (which usually designates self-identifying as Republican, but not being the party's nominee and running against the actual nominee) and voted "nay".

3
Did the Republican and Democratic parties swap ideologies at one point?

38
Is there a correlation between voting for the Democratic Party and gun crimes in the USA?
12
Are the last two primaries and caucuses won by Hillary Clinton under investigation for major voting irregularities?
2
Are the claims in this infographic about the UK Prime Minister accurate?
1
Are there any historical records that say Christian colonizers viewed the American Indians as Amalekites?
1
Are these figures about sexual harassment by Trump, O'Reilly, Ailes and Obama correct?
40
Were many former American slaves put back into virtual slavery after the civil war?
49
Did the Smithsonian publish this infographic about 'whiteness'?