Are the claims in this infographic about the UK Prime Minister accurate?

It's pretty damning, but is it accurate? 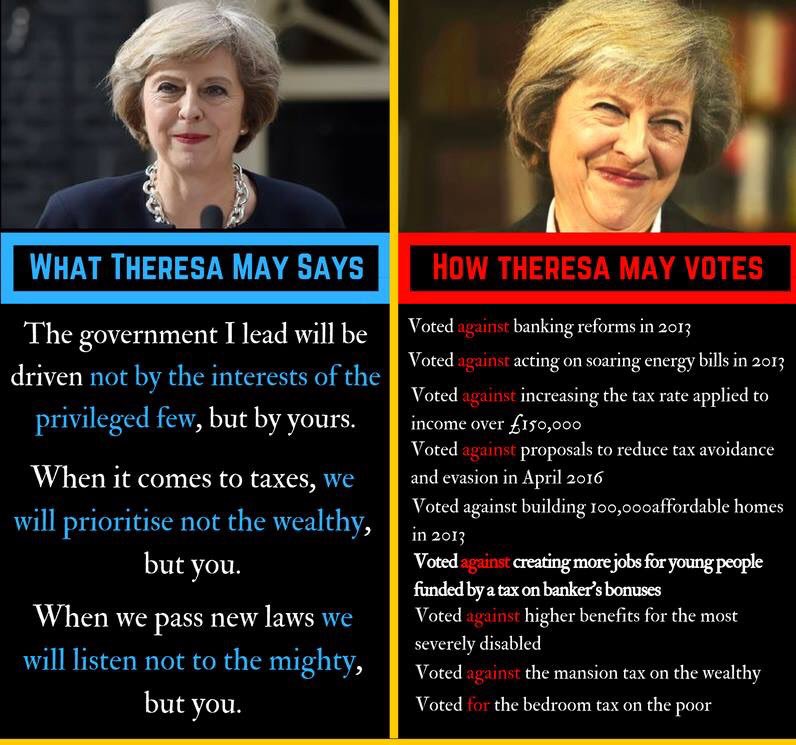 Ok, this could get long so I'm not sure I can cover every single statement on the right, but let's try.

I believe @pete the pagan-gerbil's answer answers better in spirit but this is Skeptics so let's go on what are technically correct statements. I'm going to go on the basis of whether she ever voted against/for those things at least once but will try to link the parent debate for context.

Provisional answer: No, not entirely correct.

The claim has accurate quotes but each sentence is separate:

know youâ€™re working around the clock, I know youâ€™re doing your best, and I know that sometimes life can be a struggle. The government I lead will be driven not by the interests of the privileged few, but by yours.

We will do everything we can to give you more control over your lives.

We will do everything we can to give you more control over your lives. When we take the big calls, weâ€™ll think not of the powerful, but you. When we pass new laws, weâ€™ll listen not to the mighty but to you. When it comes to taxes, weâ€™ll prioritise not the wealthy, but you. When it comes to opportunity, we wonâ€™t entrench the advantages of the fortunate few. We will do everything we can to help anybody, whatever your background, to go as far as your talents will take you.

Her vote: no (twice)

Opposition Day â€” Living Standards â€” Energy Prices and Profits â€” 4 Sep 2013 at 18:49 Theresa May MP, Maidenhead voted against proposed reforms to the energy market; against creating a new energy regulator and against putting all over-75s on the cheapest tariff.

The statement we're addressing is the claim that she voted against increasing the tax rate applied to people earning over 150K.

In spirit the statement is correct but her voting record indicates she never technically voted against increasing the tax rate applied to people earning over 150K. Rather she voted for decreasing it.

I suspect the person making the image based it on the summary on this page rather than a specific vote.

She was absent for most votes related to this issue.

This one is unclear.

There is a vote which sort of fits though I can't guarantee that there isn't another with a misleading title.

I'm going to call this true because she voted against building some unspecified number of thousands of homes and the relevant debate references an earlier plan to build 100K homes.

In the debate an earlier debate from 2012 about building 100k homes is referenced and the item includes " including building thousands more affordable homes" but doesn't say how many thousands.

This claim is probably correct.

There is a full breakdown of vote history here: http://www.publicwhip.org.uk/mp.php?id=uk.org.publicwhip/member/41113&showall=yes#divisions, I'll try and get the time to look through in more detail later (but feel free to edit in the answer if you find it before that)

8
Are media reports about squatters' rights accurate?
20
Is this photo of Occupy Wall Street authentic?
38
Is there a correlation between voting for the Democratic Party and gun crimes in the USA?
64
How accurate are these nine charts of the economy under the Obama Administration?
8
Did the former prime minister of UK say this about the Koran?
18
Correlation between BSE/CJD and Brexit vote
5
Are the "DHSC Communications Team" using bots to flood social media with posts showing NHS workers supportive of government policy?