Did Hillary Clinton say this quote about Donald Trump and equal pay? [closed]

A meme on 9gag says: 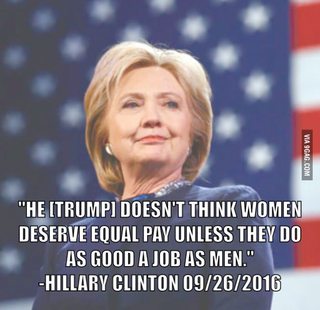 "He [Trump] doesn't think women deserve equal pay unless they do as good a job as men."

Is this true that Clinton actually said that?

May I know what's her motive of saying that? I mean the claim make it looks like Hillary is against free market meritocracy for example. Is it what she really means?

The first Trump-Clinton Presidential Debate on 26 September 2016 was widely watched and reported.

CLINTON: You know, he tried to switch from looks to stamina. But this is a man who has called women pigs, slobs and dogs, and someone who has said pregnancy is an inconvenience to employers, who has said...

TRUMP: I never said that.

CLINTON: .... women don't deserve equal pay unless they do as good a job as men.

TRUMP: I didn't say that.

So the meme is not word for word accurate, but approximates what Clinton said in the debate.

The context behind the quote is provided by FactCheck (via their fact checking on the debate).

Not the answer you're looking for? Browse other questions tagged quotes donald-trump hillary-clinton .