Is there correlation between vaccination rates and autism diagnosis? 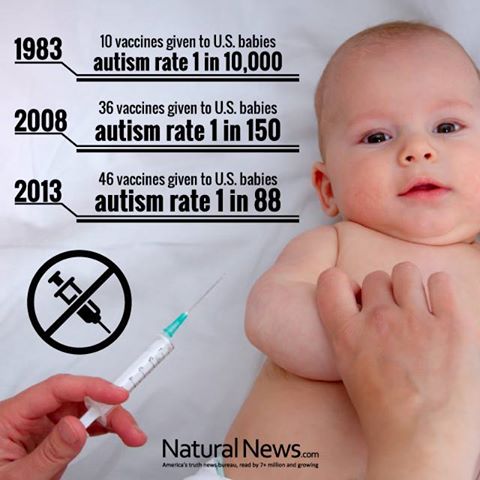 Essentially is this infographic in any way valid or is it completely made up?

These figures are approximately correct for 1983 and 2008 (but not for 2013) and seem to be based on CDC recommendations.

The numbers are likely taken from the vaccination schedule recommended by the CDC. You can see all available schedules starting from 1994 and additionally from 1989 and 1983 here.

The schedule from 1983 lists 11 vaccines total until the child is 16 years old. If we use a broad definition of the term "baby" that includes 4-6 year olds, we would get 10 vaccines as listed in the image.

The schedule from 2008 lists 39 vaccines total until 4-6 years old, 3 of which should only be given to high-risk groups, giving us the 36 from the image.

The schedule from 2013 lists 37 vaccines total until 4-6 years old (not including vaccines for high risk groups). This does not fit with the number given in the image.

It's not quite clear to me where the autism rates come from. Here are figures by the CDC. They contain the 1 in 88 and 1 in 150 figures, but for different years. Maybe the makers of the image adjusted the year.

I have no idea where the 1983 figure comes from, but it's pretty meaningless anyway because of changing diagnostic criteria.

Link between vaccines and autism

To summarize and answer your specific questions:

Is the number of vaccinations by year correct

are the autism rates by year correct

Is there any validity in the connection being made

Does anybody know where these numbers may come from

The CDC, most likely.

Are there other factors that may be changing the rates

Changing diagnostic criteria for autism over time tends to increase the observed prevalence of autism, and more medical knowledge increases the amount of recommended vaccines.

There are several potential explanations for an increase in the observed prevalence of ASDs including better analytic tools, better identification and screening methods, changes in diagnostic criteria, increased awareness among parents and clinicians, and changes in the availability of services. Source: Evaluating Changes in the Prevalence of the Autism Spectrum Disorders (ASDs)

Is there any correlation?

Yes. We both increased the vaccine schedules (thus administering more vaccines) and improved our understanding and diagnostic abilities of autism, as well as somewhat relaxed the criterion (thus diagnosing more autism).

Does that imply causation?

Not the answer you're looking for? Browse other questions tagged vaccines autism .

23
Are there any other studies (besides the discredited Wakefield studies) that have found a link between vaccination and autism?

23
Are there any other studies (besides the discredited Wakefield studies) that have found a link between vaccination and autism?
20
Do "new documents" change anything about the Wakefield/MMR vaccine paper/retraction/fraud situation?
24
Was SIDS unheard of before "modern vaccine schedules"?
8
Are there large scale studies investigating relationship between IQ and autism spectrum disorders (especially Aspergers)?
11
Are hepatitis B vaccines for newborns safe and cost-effective?
10
Are mandatory influenza vaccinations to healthcare employees effective?
15
Can vaccinating for COVID-19 cause a selection pressure for more virulent strains?
14
Is there a correlation between vaccination levels and new COVID-19 cases?