The Facebook page "Meanwhile in Australia" has posted a meme with over 10,000 likes, and about 2,000 shares: 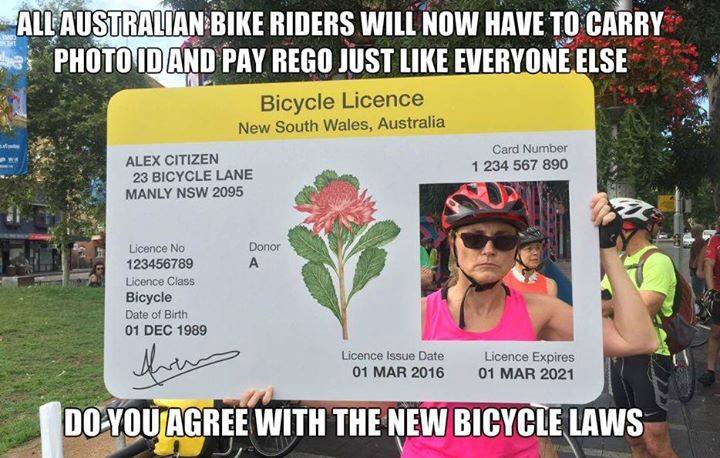 Do you agree with the new bicycle laws

I am aware that cyclists are now required to carry photo id in the states that have introduced new road laws. (But not a Bicycle Licence, as illustrated.)

However, is there any registration fee due for cyclists?

Doing a Google (Australia) search for "bike riders will now have to carry photo id and pay rego", you find the SMH announcement of a proposal from Jul 15, 2015, and more reports around Dec 21, 2015, that it is intended to be a law passed in NSW State parliament, to start March 2016 and enforced with fines March 2017.

However, we can refute the "pay registration fees" claim. Firstly, it would only have been NSW (so far), not the whole of Australia. And then, in agreeance with the Executive Style reference above, I find no mention of bikes or cyclists in the legislation:

Looking at Chapter 4 Vehicle registration; Section 62(c) of the Road Transport Act 2013 No 18, the RTA has the function to collect registration and permit charges based upon the rest of that chapter, and taxes according to the Motor Vehicles Taxation Act 1988.

The rest of Chapter 4 of the Road Transport Act 2013 No 18 does not refer to "cycl", other than references to a "motor vehicle recycler", or "bike".

The Motor Vehicles Taxation Act 1988 does only refer to motor vehicles and I see no caveats for non-motorised vehicles, except for trailers.

NB In Australia, (this one is nationwide, but only because each state has implemented the same Road Rules) bicycle riders must wear helmets. This is enforced in the Regulations associated with the Act, where they define a rider, a bicycle and a vehicle, as well as pointing out most references to "driving" include "riding".

In light of the language used in the regulations, I also searched the legislation for "rider": That found the current id requirements, and Schedule 1 Part 3 Section 5(i) gives the RTA the right to fine riders for not wearing a helmet, but still no registration fees (and it avoids riders requiring a driver's licence by omission as well as parenthetically emphasising it is only a requirement of drivers).

No, there are no laws, and no planned laws, for cyclists in New South Wales to pay registration.

Since posting this question, it was discussed in the Parliament of NSW. Registration was "ruled out" by the Minister for Roads, Duncan Gay.

Here is an excerpt, culling out some of the political nonsense:

The Hon. PENNY SHARPE ( 15:18 ): I direct my question to the Minister for Roads, Maritime and Freight. Given that an Australian Capital Territory member of the Legislative Assembly confirmed during a recent community meeting that the Minister's office had attempted to get other States and Territories to support bicycle registration, when did the Minister intend to reveal to the community his plans to introduce bicycle registration in New South Wales?

The Hon. DUNCAN GAY: [...] some time ago we had a cycling round table. At that round table we considered a number of issues including registration and a whole lot of other issues that groups as diverse as Bicycle NSW, Cycling New South Wales, the Amy Gillett group, the Pedestrian Council, the police, the Centre for Road Safety, the NRMA and many others were involved in. One of the issues for consideration was a cycling licence and registration. The members of that round table, with the policy we developed, rejected, and thus we rejected, a licence and registration. [...]

The Hon. Penny Sharpe: So that is a no?

The Hon. DUNCAN GAY: I rule it out.

I note that Duncan Gay's version is not consistent with news reports from December 2015.

Not the answer you're looking for? Browse other questions tagged law australia bicycles .

17
If I drop my cycle helmet, do I need to buy a new one?
14
More stars visible from the Australian outback than anywhere else on earth?
24
Do 20% of Australian children think pasta comes from animals?
5
Could the Australian Aborigines have Descended from Three People?
15
Was Australian colonisation started as a penal colony?
38
Is Australian fauna more dangerous?
6
Was the Australian Bureau of Statistics website “attacked”?
2
Did Dr Ulrich Mellinghoff Suggest 140Km/h would be a safer limit on Australian roads?
69
Is this a satellite image of Australian bushfires?