Did unit confusion lead to a house with enormous doors and windows in Ypres, Belgium?

The Wikipedia article on metrication contains an unsourced statement regarding an incident in Ypres (Ieper), Belgium:

During the reconstruction of Ypres after World War I, British Army engineers drew up the plans for rebuilding a bombed house in feet. However, the Belgian builders interpreted the numbers in metres. As a result, the house had enormous doors and windows.

This statement is unsourced and frankly, I find it somewhat hard to believe, as builders have brains and should imagine something is wrong before constructing a 6 metre high door. I can't seem to find sources confirming this, and if true, there should be (many) contemporary press accounts including photographs.

Was a house in Ypres, Belgium rebuilt with huge proportions, due to confusing feet for metres?

I asked the people from the In Flanders Fields Museum, which is located right in Ypres. If anyone knows about the background of the story, it should be them.

And sure enough, the nice person who responds to email inquiries at the museum shed some light on the question. Here's his response to my question about the truth of that statement:

Yes, there is one story about the Slessorium, i.e. the bath-house that was built in the early ‘30s in the garden of Talbot House. The chaplain running the soldiers club sometimes used a very literary pen in writing down the house history. On the building of the Slessorium, he indeed reported that the flemish building company intermingled feet & meters – but, as your own thoughts show, it is hard to believe that this was really the case. (In the worst scenario, it can be accepted that yards were taken for metres…)

He also gave me a link to a page that shows the house and what the chaplan actually wrote: 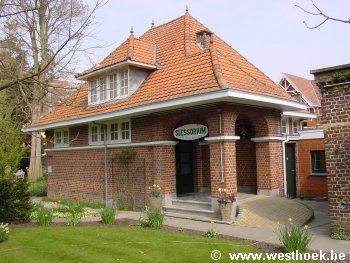 The 'Slessorium', the bathhouse was named after Major Paul Slessor, who acted on behalf of Lord Wakefield of Hythe when in 1929 he purchased the house and on 27 October 1930 donated it to the Talbot House Association. Slessor was also to prove a key figure in the refurbishments of the house. He planned its funishings in every part. Until his death in 1949 Slessor maintained the house with unceasing care. The bathhouse built in 1931, "came out a good deal bigger than in the mind's eye. The secret may be divulged that the continental use of metres versus the British one of feet caused some confusion to a committee studying the architect's plan in London."

I share the museum staff's judgement that the important part about metres and feet should not be taken literally. The guy was clearly just making fun. This is a rhetoric structure many people use when something didn't turn out to be the way they expected.

And most certainly, the doors and windows are not enormous.

It is a nice anecdote, for sure. But I think this one is busted.