Is the UK's trade with the EU artifically inflated by having to ship its exports via Europe?

I was talking to a pro-Brexit UK woman who made some... interesting claims about UK-EU trade that I hadn't heard before and couldn't immediately counter.

She claimed the UK's apparently very large portion of exports to Europe (she said 60% of UK exports, I found 50%) is inflated. Apparently the EU requires the UK to ship their cargo via Europe, even if it was going worldwide. So even if a UK cargo ship intends to go to, say, Mexico it first has to dock in Amsterdam "trade" and then head on to Mexico. That counts as "trade with Europe".

Thus the amount of "trading" the UK does with Europe is inflated. Thus Brexit won't be any great harm to the UK.

I don't believe it for a moment. Where did she get this idea? Sounds like Daily Mail nonsense. And where can I get something to refute it? I'm afraid even official UK govt charts like these won't be convincing since she can explain that as "skewed".

This is sometimes called the "Rotterdam effect".

The term Rotterdam effect is used to describe the situation where goods initially exported to one country are subsequently re-exported to another country. Such an effect could be found at many ports. As you note, the Rotterdam effect is difficult to quantify precisely and any estimate must be based on a number of assumptions.
An ONS article published in 2015 using data for 2013, estimated that at the top end, the Rotterdam effect could be up to 50 per cent of goods exported to the Netherlands, which would be around 2 percentage points of the UK’s total exports of goods and services. Of course, there is considerable uncertainty about any such estimate.

You can look at the data he cites here. This graph is especially relevant for the claim: 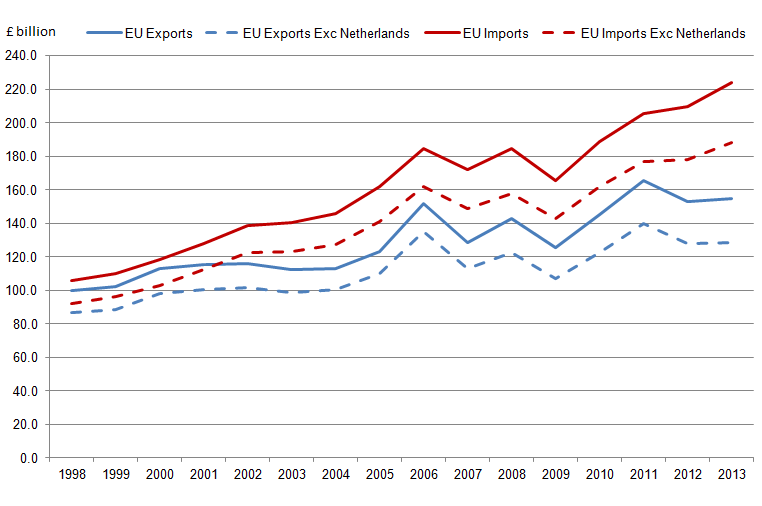 Even if we subtract all exports to the Netherlands from the exports (which we shouldn't), it is not true that a "very large portion" of exports should be excluded because of this.

It is of course true that the Rotterdam effect doesn't just exist with the Netherlands, but as the telegraph notes (citing the ONS):

It said: "The port of Rotterdam is not unique in acting as a ‘gateway’ for other countries; it is accurate to say that this form of trading can occur in almost any place. For example, goods arriving in France from China could, after clearing customs, be distributed to other EU member states and potentially be recorded as imports from France.

"The main difference is that the port of Rotterdam is one of the largest in the world and the sheer quantity and value of goods being traded separates the Rotterdam effect from other, similar, cases and therefore attracts more attention," it added.

it is not possible to estimate, with any certainty, the impact that the Rotterdam effect has on UK trade with the Netherlands and its subsequent impact on UK trade with EU and non-EU countries

Still, I think the estimate of the Chair of the UK Statistics Authority should provide an answer to your question.

btw, this leaflet for staying in the EU puts the export percentage at 44%, using OSN data

Not the answer you're looking for? Browse other questions tagged united-kingdom europe .

7
Can the UK fire its nuclear weapons without US agreement?
16
Did the EU threaten to sue in connection with “Comic Sans” having an eye on the Euro symbol?
37
Is Spain ”the second most mountainous country in Europe”?
56
Did Martin Schulz say that it is not the EU philosophy that the crowd can decide its fate?
7
Has the Council of Europe called for the banning of British newspapers mentioning when a terrorist is Muslim?
5
Did 20 million people die because of Nationalism in Europe before the formation of the EU?
18
Is the level of support for evolution decreasing in Europe?